Mangaluru: Superhit movie Bhojaraj MBBS to screen in UAE from May 6

Dubai, May 2: Superhit movie of the year ‘Bhojaraj MBBS’, which has completed more than 50 days of screening in the coastal region, will be released in six theatres of Dubai, Sharjah and Abu Dhabi from May 6. This information was shared by the director of the movie, Ismail Moodushedde in a press conference.

The movie has received widespread appreciation from the cinegoers. The movie has a good storyline, comedy and a message to society. Bhojaraj Vamanjoor has played the protagonist in the movie for the first time. The cast also includes renowned actors Aravind Bolar, Devdas Kapikad, Vijaykumar Kodialbail, Umesh Mizar, Ravi Ramakunja, Sheetal Nayak and Navya Poojary. 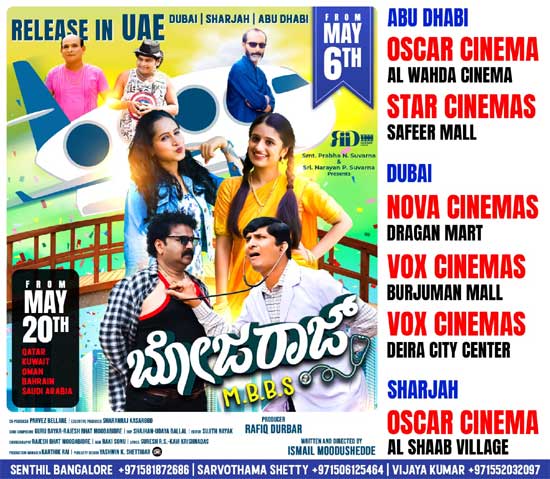 The movie is produced under the banner of Durbar Cinemas by Rafiq Durbar and offered by Prabha Suvarna and Narayana P Suvarna. The movie is co-directed by Parvez Bellare and Sharan Kasargod.

For the first time, two Doyens of Tulu drama and movies, Devdas Kapikad and Vijayakumar Kodialbail are acting together in a movie. Tulunada Manikya Aravind Bolar has donned three unique comedy roles. This movie was released in gulf countries by Senthil Bengaluru.

Title: Mangaluru: Superhit movie Bhojaraj MBBS to screen in UAE from May 6