Gurugram, May 1 (IANS): Following the directions of Haryana Health Minister Anil Vij, a joint team of the state and Gurugram Drug Controller Department has sealed Lions Blood Centre, operating in the basement of a well-known private hospital in the Sushant Lok Phase-II area, due to irregularities.

The team has also recovered several units of blood and deposited it in the Rotary Blood Centre.

The action was taken under the leadership of Senior Drugs Control Officer Parminder Malik. 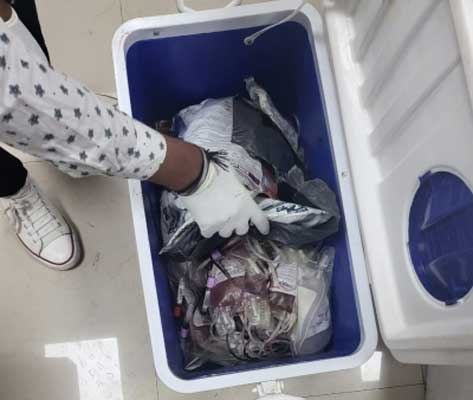 In connection with the matter, an FIR was registered against Swati, Executive Director of Lions Blood Centre, Centre in-charge and Medical Officer Vipin Kathuria at the Sector-56 police station, and an investigation has been started.

After receiving the information, the State Drugs Control team raided the centre and found irregularities like blood being sent to many states including Uttar Pradesh.

Officials said that according to the rules, it is mandatory to take permission from the concerned chief medical officer (CMO) before setting up blood donation camp anywhere, but from April 16 last year to April 15, 2022, no permission was taken before setting up the camps.

There was no record of how blood was sent to other states.

Similarly, the medical officer of the blood centre cannot work simultaneously in another place but Vipin Kathuria works in a lab.

The doctors and management associated with the centre will be questioned. It will also be known to which states the blood was sent. How much blood was collected during a year by organising camps without permission," the police said.

"A complaint of irregularities was received against Lions Blood Centre. A notice will be given asking why the license of the centre should not be cancelled. Further action will be taken after receiving the reply to the notice," Parminder Malik, Senior Drugs Control Officer, Gurugram Zone said.