The AAP is the first regional party which will form a government in another state apart from New Delhi.

The Bahujan Samaj Party (BSP) is limited to just one seat from where it is leading so far.

The Congress has won only two seats while the Jansatta Dal (Loktantrik) has managed two seats in Uttar Pradesh.

The BSP won a single seat in the state and leads in one constituency, whereas one Independent candidate has won and another is leading in Uttarakhand till 8 p.m.

The final election tally of Punjab has come and the AAP has secured a landslide victory with a thumping majority of 92 seats. The BJP has won just two seats, Congress 18, BSP one, Shiromani Akali Dal three while one seat went to an Independent candidate.

In Goa, the ruling BJP is short of the majority mark by just one seat as it bagged 20 seats in the 40-member Assembly.

In the 60-member Manipur Assembly, the ruling BJP retained power by winning 32 seats, while the Congress could bag only five seats.

The stage is finally set for counting of votes for the assembly elections 2022 in the crucial states of Uttar Pradesh, Punjab, Uttarakhand, Goa and Manipur with many top political parties making claims of their victory.

It is a high-stakes election in Uttar Pradesh for the BJP and the Modi government as the state sends the highest number of 80 MPs to Lok Sabha and the party's performance is expected to have a bearing on the next general election slated for 2024. 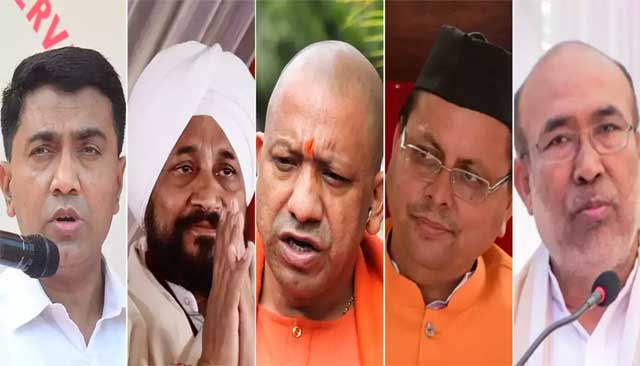 Several exit polls have forecast a clear majority for the BJP in Uttar Pradesh and for the Aam Aadmi Party in Punjab, while predicting a hung assembly in Goa and a tight race between the BJP and the Congress in Uttarakhand. Except for Punjab, all other states were under the BJP.