After unseasonal rain, Mumbai under a thick haze layer

Mumbai, Jan 24 (IANS): A day after a western disturbance and cyclonic circulation over Rajasthan brought unseasonal rains it, Mumbai on Sunday had a thick layer of haze settled over it.

According to weather experts, the haze was attributed to "dust-raising winds", brought as a result of the same Western Disturbance which caused Saturday's rains and a drop in Sunday's temperature.

It was further said that since everybody was wearing mask due to Covid-19, no other precautions were required. 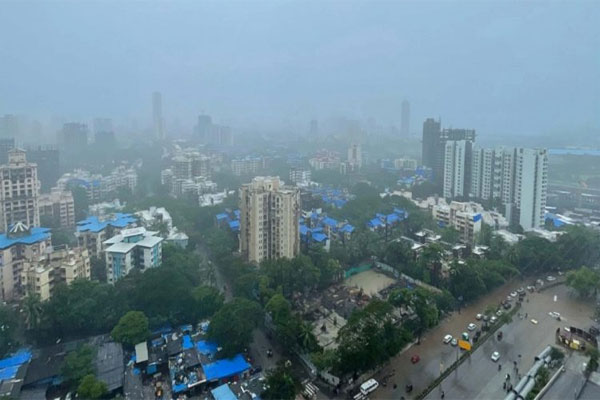 "This haze consists of mainly sand because it originates from the Middle East where the conditions are sandier. It cannot be defined as smog, which comprises a more complex mixture of pollutants," said Gufran Beig, Project Director, SAFAR.

The Weather Department said that the dust winds phenomenon is going to last for Sunda only, but again from Monday onwards, there is a possibility of a dip in temperature in Maharashtra for the next few days.

The maximum temperature of Mumbai's Santacruz stood at 23.8 degrees Celsius, which is lowest in the last 10 years.

The dip in temperature was a result of the cloudy sky over north Konkan. It brought day time temperatures to as low as 23-24 degrees Celsius, which is the lowest maximum temperature in the last 10 years or maybe more, for the month of January.

The India Meteorological Department (IMD) on Saturday said that after affecting normal life in Karachi, a massive dust storm headed towards Gujarat and south Rajasthan on Saturday evening and it may continue to have an effect till next 12 hours.

Karachi was caught off guard on Saturday morning when a dust storm that travelled from Pakistan's west disturbed the normal life there with visibility reduced to less than or about 500 metres.

"Saurashtra coast has been getting dust rising winds from afternoon. Dwarka station reported 400 m visibility, at Porbandar, wind speed was more than 10 km per hour with visibility of less than 1 km," the IMD said.

Winds carrying dust blew from south Pakistan areas and adjoining the Arabian Sea towards Kutch and Saurashtra towards evening.

The 'Sand and Dust Storms Risk Assessment in Asia and the Pacific' report for 2021, published by the Asian and Pacific Centre for the Development of Disaster Information Management (APDIM), which is a regional institution of the United Nations Economic and Social Commission for Asia and the Pacific (UNESCAP), had said more than 500 million people in India and more than 80 per cent of the populations of Turkmenistan, Pakistan, Uzbekistan, Tajikistan, and Iran are exposed to medium and high levels of poor air quality due to sand and dust storms.

Lahore, Karachi, and Delhi are the three most affected cities, the report had said.

Title: After unseasonal rain, Mumbai under a thick haze layer