This is a momentous year as TAPMI is celebrating the Centenary Year of the founder, Late Tonse Ananth Pai, Padma Bhusan Awardee. 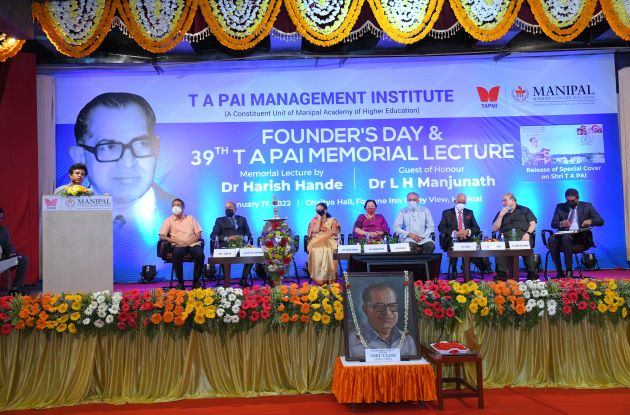 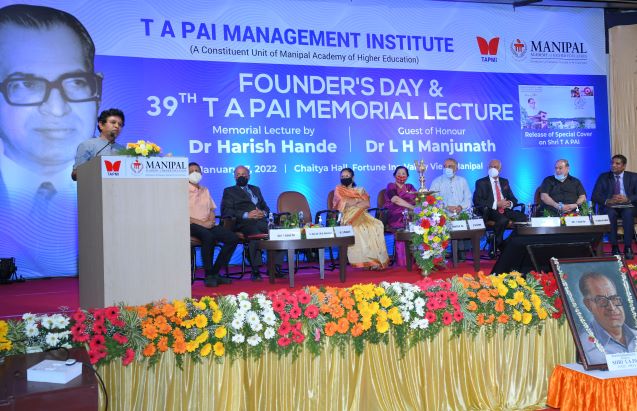 A special cover was released on the occasion by Sharda Sampath, chief postmaster general, Karnataka circle who presented the same to U Satish Pai, executive chairman, Manipal Media Network Ltd. Late T A Pai’s nephew Dr Laxman G Prabhu fondly remembered his uncle and highlighted the many qualities that made him an inspiring figure.

Dr Harish Hande, founder & chairman - SELCO - Solar Light Pvt Ltd, was the chief guest for the event. A renowned social entrepreneur Dr Harish Hande highlighted the societal role that management institutes like TAPMI must play, drawing inspiration from the life and work of T A Pai guest of honor, Dr L H Manjunath, executive director, Kshethra Dharmasthala Rural Development Project, spoke about his strong association with T A Pai as an employee of the Canara Milk Union and his enormous contribution to the region.

The event closed with Prof S Sudhindra (Associate Dean – Academics) offering a vote of thanks.

Tonse Ananth Pai joined Syndicate Bank in 1943 as deputy manager. After holding several positions in the bank and being the general manager from 1944 to 1961, he rose to become managing director from 1962 to 1964. His stewardship of the bank is credited with several achievements – fastest growth, pioneering schemes, innovation in the mobilization of small savings, agricultural financing, and focus on the common man.

After a little over one year, he rejoined Syndicate Bank in 1966 and was appointed its chairman in 1967. He was appointed as chairman of Food Corporation of India in 1965. The Government of India appointed him chairman of Life Insurance Corporation in 1970. He was elected to the Rajya Sabha in 1972 and appointed as Union Minister for Railways. In 1973, he was given responsibility for the newly created Ministry of Heavy Industries, and subsequently, the Ministry of Steel and Mines. Pai took over the Ministry of Industry and Civil Supplies in 1974 and thus became responsible for the industrial development of India.

About the T A Pai Foundation Day Lecture

This event is organized every year to acknowledge the contribution of Padma Bhushan awardee, late T A Pai, who laid the cornerstone of TAPMI in 1980 and his vision, intended to give back to society and create employment opportunities for all. On this occasion, thought leaders and Eminent Citizens of the country share their vision, expertise with the students of TAPMI and other Manipal Institutions to inspire them on contemporary topics. Mrutyunjay Mahapatra, MD & CEO, Syndicate bank, Prof Anil D Sahasrabudhe, chairman, AICTE, Faizal E Kottikollon, founder and chairman, KEF Holdings; chairman of the board, Meitra Hospital, Kozhikode, and (Dr) Satya Pal Singh, former Hon’ble Minister of State for HRD (Higher Education) are a few personalities who have delivered the lecture in the past.