After receiving the civic honour, Eshapriya said that, "All the pontiffs followed the same path of Madhwacharya. I did not do anything, it happened on it's own. There were many people who supported me throughout my first term. God's grace will be there for everyone and I am the live example for that. The senior Swamiji has guided while all cooperated during pandemic. I was the most junior pontiff in ashta math. Everyone helped me out like baby elephant. I am very greatfull to all." 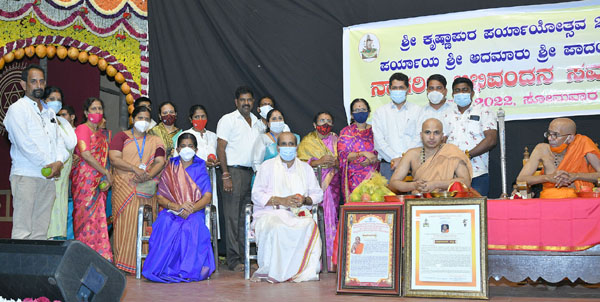 Sri Vidyasagara Theertha Swamiji said, "It is very necessary to memorise the activities of Ishapriya. During the Covid period, he did not hesitate and continued the tradition without any fault. He made privilege to all devotees in getting the Darshana of Lord Krishna.

He has shown his passion, love and interest towards desi items and created the cautious of desi goods among people's mind.

Our country became independent, but we are losing selfness (our) everyday. He loves the country as he loves God. He did not take steps back from his regular activities though there is no income for temple. But the way he managed the situation is exemplary to all," Vidyasagara said.

Sumithra Nayak, president, City Municipality country read out the felicitation letter. He urged the Eshapriya to extend the same support like before.