Bantwal, Jan 17: The Dalit Seva Samithi staged protests on Monday, January 17 led by its founder president Sesappu Bedrakadu against one Vishnu Bhat who has allegedly encroached Kannadaguli – Kotelu road in Manila village and also the Manila Gram Panchayat for hesitating to evict him and start the works. The protests were withdrawn after assurances by the panchayat superintendent that the road works will be started from January 18.

Sesappa Bedrakadu, addressing the protestrs, said that the non-development of the road during the past several years have been causing problems for the people. “The panchayat administration has set aside the necessary amount after several requests by us. The panchayat has not begun the works as they are afraid of Vishnu Bhat,” he alleged. 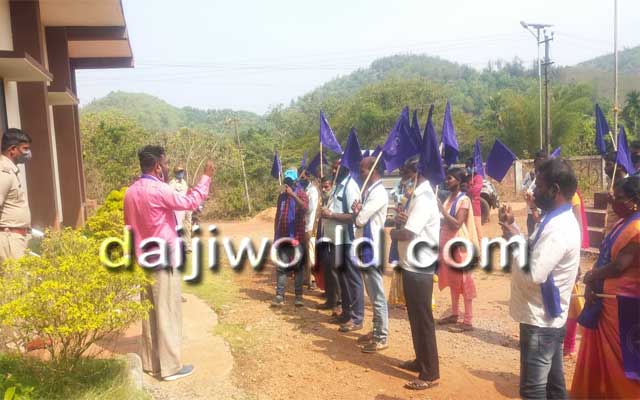 Panchayat development officer Devappa P R tried to pacify the protesters, but they refused to move budge unless the road works began and sat in front of the panchayat office. Vitla police station SI Sandeep Shetty had provided tight security to the office.

Gram panchayat president Vanita, vice president Rajesh Kumar Balekallu and PDO Devappa P R held discussions with Sesappa Bedrakadu and other protesters later in the panchayat office. The protests were withdrawn only after an assurance the the works would begin from January 18.