Mangaluru, Jan 17: The ambitious Paschimavahini scheme of the state government sanctioned to compensate for the Yettinahole project, is coming up and will soon start serving the people of the district. The dam will serve the purposes of irrigation, connectivity and enrichment of the underground water table.

The dam in question is being built across River Netravati between the Biliyoor village in Bantwal taluk and Tekkaru village in Beltangady taluk. The construction is in the finishing stages and it will be functional by the end of March this year. The project, undertaken at a cost of Rs 46.7 Crore, once completed, will benefit both agriculture and nature. 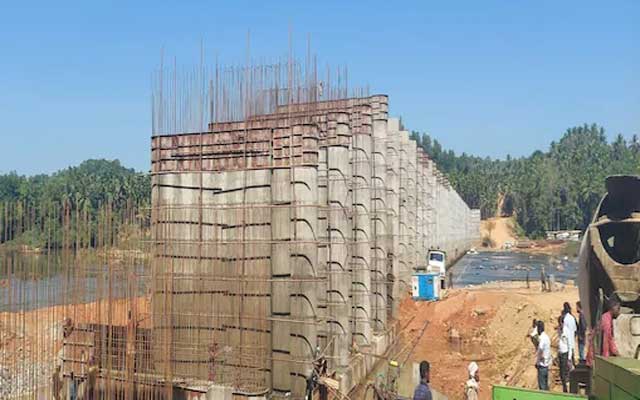 The state government had taken up the Yettinahole project for providing water to districts in the plains, despite strong opposition from the people of coastal Karnataka. The people living in the coasts are worried that the said project might result in shortage of water for them.

Paschimavahini scheme was implemented by the government with the purpose of ensuring that the people in the coast do not face water scarcity. The coast gets about 4,000 mm rainfall during the monsoon months but many places here face water shortage during the summer months.

Construction of this mega dam, the first under the Paschimavahini project, is going on between Biliyoor village and Tekkaru village. The project plans to provide for irrigation, serve as a bridge between Biliyoor and Tekkaru villages, and to charge the underground water table. The project cost is Rs 46.7 Crore. Event though tender was called and the project had a deadline of 18 months time for completion, due to untimely rain and excessive water flow in the river the works were affected. Works are now progressing at a brisk pace.

Along with a 305 metres long bridge, a dam is also being constructed. Unlike manual gates found in other dams, the sluice gates of the dam here will be fully mechanically operated. Even though the dam height is about 8 metres, it has been decided to store water for up to 4 metres. As a result, the area getting inundated will be less. If agricultural land goes under water, arrangements to disburse suitable compensation has been made. Many farmers have given up their land for the project with the hope that the dam will help them in future.