Pune, Jan 5 (IANS): Renowned social worker Sindhutai Sapkal, revered as "Mother of thousands of Orphans", who passed away late on Tuesday night, was laid to rest with full state honours in Pune on Wednesday afternoon.

Sapkal, 74, who had undergone surgery and was hospitalised for over a month, breathed her last following a cardiac arrest at Galaxy Hospital on Tuesday night.

Conferred the Padma Shri last November, she is survived by her sole biological daughter Mamta besides over 1,500 orphans she had @adopted" and who loved her as their Maai. 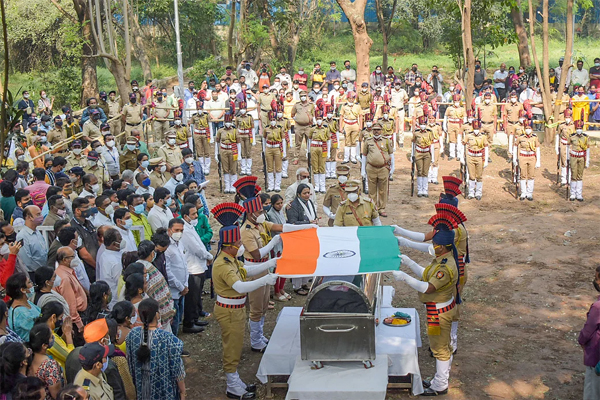 This morning, her mortal remains draped in the National Tricolour were taken to Manjari village near Hadapsar on the outskirts of the city where people, including many of her foster children, paid their last respects at the Bal Sadan.

Hundreds of her beloved children - many now settled in different professions or businesses in India and elsewhere in the world - turned up with moist eyes for a final glimpse of their "Mother" and expressed silent gratitude to her for giving them a purpose in their orphaned lives.

Later, the body was taken in a solemn procession with a police contingent, accorded a gun salute, the Indian flag taken off ceremonially and she was buried at the Thosarpaga crematorium, said a grieving family friend.

As her body was lowered in the grave, cries of "Maai Amar Rahe", "Sindhutai Zindabad" rent the air with many seen breaking down.

"The life of Dr. Sindhutai Sapkal was an inspiring saga of courage, dedication, and service. She loved and served orphaned, tribals, and marginalised people. Conferred with Padma Shri in 2021, she scripted her own story with incredible grit," President Ram Nath Kovind said in a message.

Prime Minister Narendra Modi said he was "pained by the demise of Sindhutai Sapkal" who will be remembered for her noble services to society.

"Due to her efforts, many children could lead a better quality of life. She also did a lot of work among marginalised communities," the PM said.

Maharashtra Governor Bhagat Singh Koshyari said with the demise of the "mother of thousands of orphans", many will now again be rendered motherless.

"I am deeply saddened by Sindhutai Sapkal's passing. I pray to the Lord to give strength to all her children to endure this ordeal." he said in a message.

"In her untimely demise, we have lost an inspiring personality who selflessly supported the destitute kids, especially the girls, and helped them become self-reliant in life," he said.