Kundapur, Dec 30: Two separate complaints are filed in the case involving the assault by police on the Koraga community members at a Mehendi programme which led to the suspension of sub inspector and transfer of police personnel.

The first complaint is filed by Jayarama Naika (27), constable of Kota police station. In his complaint Jayarama says that he was at his residence after completing the duty when he got a call from sub inspector Santhosh B P at 10.45 pm on December 27. Both the PSI and constable Jayarama went to the house of Rajesh, resident of Chittibettu of Kotathattu village where Mehendi programme was being held and DJ sound system was playing at high volume. Around 30 to 50 people were dancing on public road in an inebriated state. The crowd included accused Rajesh, Sudarshan, Ganesha Barkur, Sachin, Girish, Nagendra Putran, Nagaraja Puthran and others. 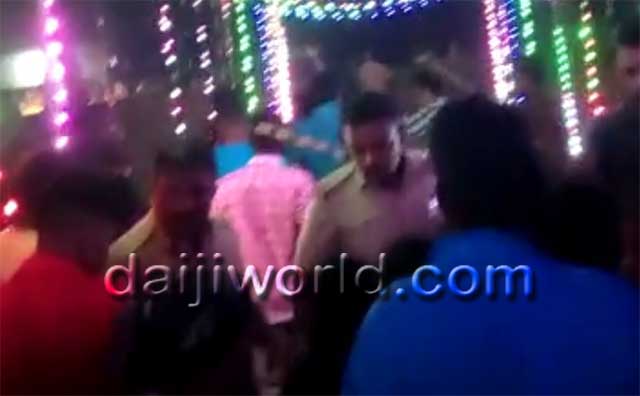 Local resident Subramanya Urala was present on the spot. He had called 112 and asked help to reduce the sound of the music as his mother has heart ailment. However, when the 112 personnel arrived on the spot, the accused spoke harshly with them.

When PSI asked the accused to reduce the sound, they grouped together and challenged the sub inspector holding wooden logs in their hands. They also pushed the PSI who was in uniform. When the complainant constable Jayarama Naika went near the DJ to put off the music, he was attacked by the accused. He received injuries on the index and middle finger of left hand. They also obstructed him from conducting his duties.

Constable Jayarama Naika went to CHC Kota for treatment on the morning of December 28 and was referred to Kundapur taluk hospital as the pain increased due to the injuries he received.

In a counter complaint filed on the same issue, complainant Rajesh (30), resident of Chittibettu, Kotathattu village of Kota alleged that Mehendi programme started at this house at 8 pm on December 27 and DJ music was arranged for the same. At around 10 pm as the programme was being winded up, Kota police station officer Santhosh BP, HC Ramanna, head constable Ashok Shetty, Manjunath and other personnel trespassed the premises and abused the complainant as well as others assembled in the programme. They also kicked Ganesha Barkur, uncle of the complainant and beat him and pulled up his collar. As they were taking Ganesha to the jeep, complainant, his mother Girija, aunt Baby and other elderly women requested the police to let Ganesh off. But the police assaulted Laxmi, an elderly woman with lathi on the head and also kicked her. In addition, they also beat Sudarshan, Girisha and Sachin with fists and took them to police station in the jeep. After reaching the police station they disrobed all of them and threatened them.