Udupi, Dec 8: The ‘Bhatha Muhoortham’ (storage of paddy), the final of four rituals leading to the next biennial Paryaya in January 2022, was performed which was led by Vedamurthy Srinivas Upadhyaya of Krishnapur Math at Krishna temple premises on Wednesday, December 8.

Sri Vidyasagara Theertha is the swamiji of ascending paryaya peetha (Sarvajna peetha) is scheduled to be held on January 18, 2022.

As per the tradition, a grand procession began from the front of Krishna math. 'Bhatthada Mudi' (paddy in traditional bags) placed on a decorated golden palanquin was taken around Car Street, near Lord Krishna temple accompanied by musical instruments, vedagosha, as part of the procession. Prior to the start of procession, the diwana performed puja to the 'Mudi' at Badagumalige. 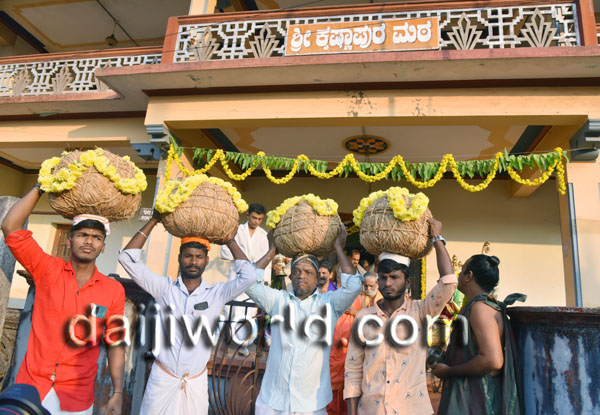 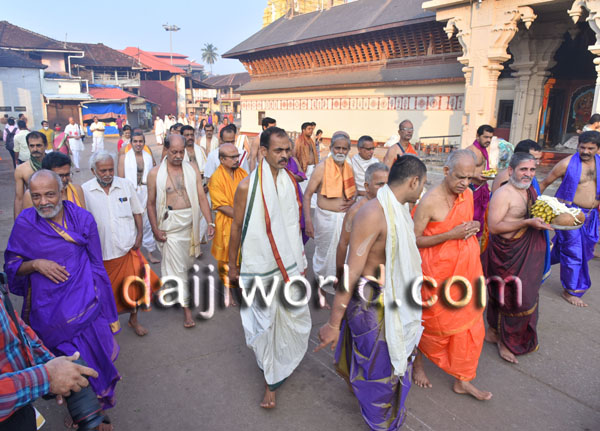 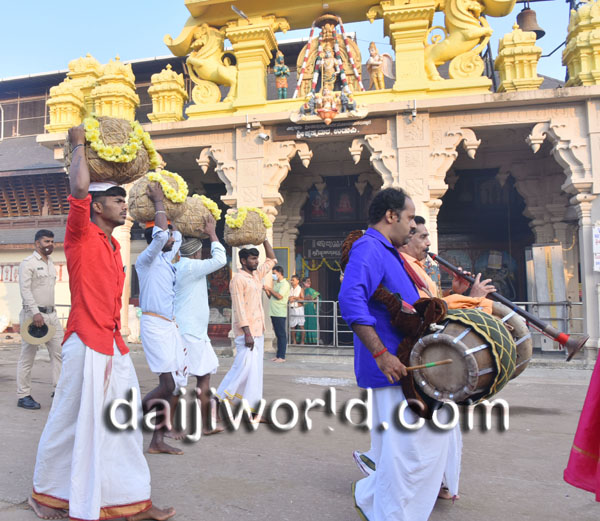 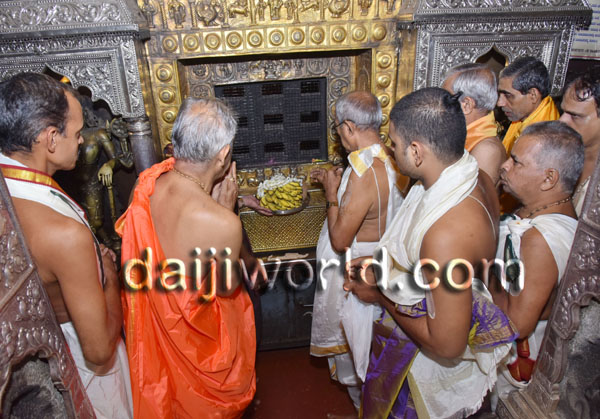 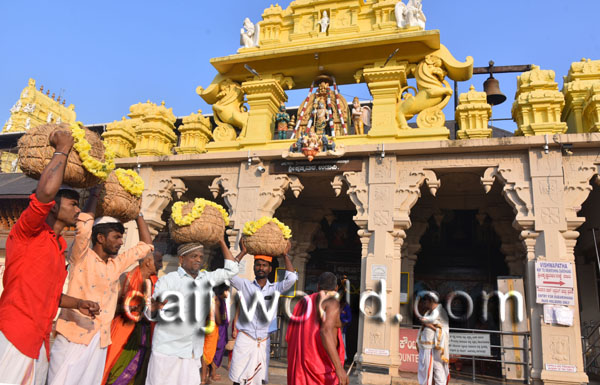 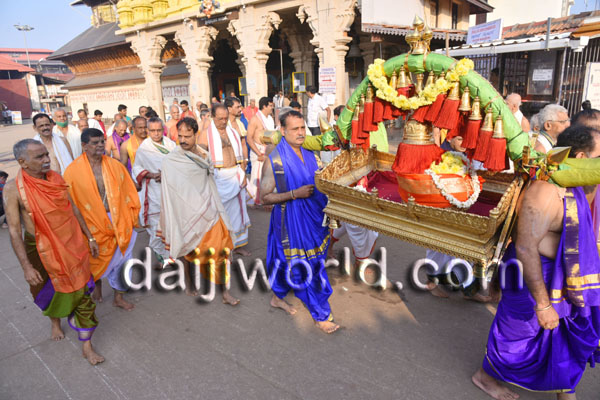 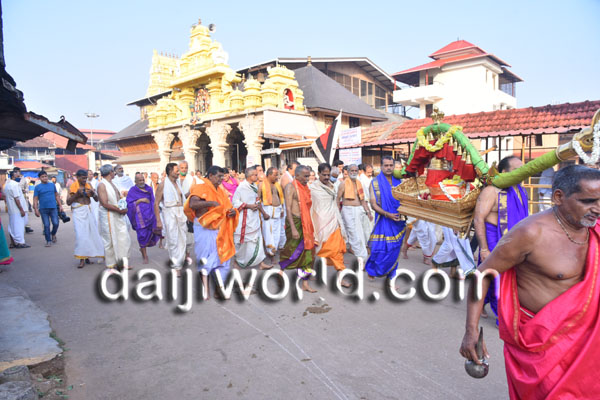 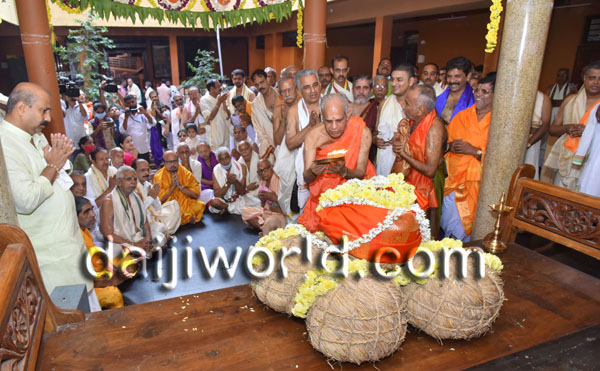 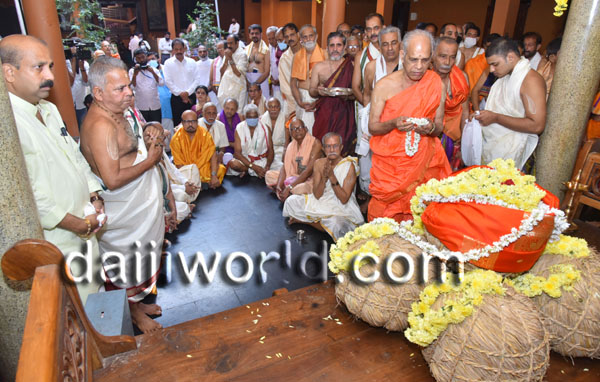 Followed by the puja at Sri Chandramouleshwar and Sri Anantheshwar temples, the two oldest temples in the city, the procession entered Sri Krishna Mutt.

The seer along with other guests offered prayers to Lord Krishna and Lord Mukhyaprana. The procession later proceeded to 'Badagu Malige', which is the store house in the temple. Prayers were offered to 'Navagraha' and 'Navadhanya' was offered to all seven mutts and two temples Chandramouleshwar and Anantheshwar temples on the occasion.

The programme was concluded by keeping the Shikhara on Kattige ratha (wooden chariot) by representative of math.

Udupi MLA and working president of Krishnapur math paryayotsava committee, Raghupathi Bhat said, “The paryaya event is coming nearer, there is no much time to preparation. This is the final ritual among four major muhoorthas. Biennial paryaya syastem started by Vadiraja swamiji. Udupi SriKishna math is known as Anna Brahma kshethra. Hence for maintaining the same legacy of Anna santharpana at the math, Bhatta muhoortha is important. It is nothing but storage of rice. We have conducted many preparation meetings before. Pura pravesha of Sri Vidyasagara Theertha will be held on January 10 and Horekarnika programme will begin from January 11 and will be concluded on January 16. A large number of volunteers of Sri Keshethra Dharmasthala gramabhivriddhi sanghatana will enhance the beauty of Horekanike by their participation. On January 12, special horekanikanike led by CMC Udupi including 35 wards. So far, ther is no changes in government guidelines in related to Covid-19. Committee will do preparations like every year. If anything happened during that time, we will go as per the government circular. I wish and hope nothing will happen like that. Udupi has achieved in Covid and top in vaccination rate. We have completed as almost 95 percent in it. We will take care of government SOP’.

Vishnuprasad Padigar, secretary of the committee, said that, “The Bhatha Muhoortha was held at 8.22 am at Badagumalige. As part of this ritual, special prayer was offered at Sri Krishnapur math. Puruhits of math kept a Shikhara on Kattige ratha on the occasion, which will use in next two years. Preparations are going in a good manner. A place is identified for the warehouse, to store the things, which gets from horekanike".