The school boasts of three pairs of twins in fourth standard, two in fifth standard, and one each in sixth, seventh, eighth and tenth standards. There are two twins in the second PU class. Out of these twins, four are made of girls, four twins are made up of boys while the remaining twins are of one boy and one girl. 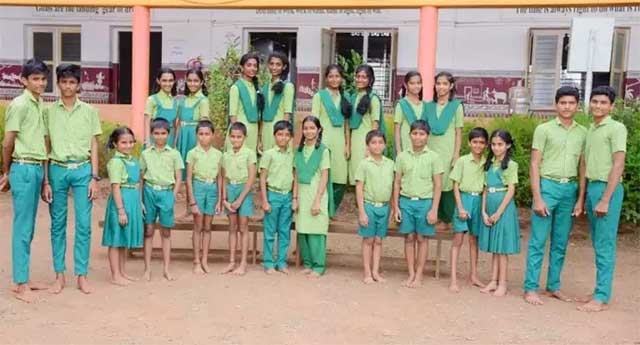 Chaitanya P Malli and Chandana of Malli, who are fifth standard students, are the children of Purushottam and Prabhavathi couple from Manjanady. They are in this school from LKG, Rajesh Suvarna-Vandita couple’s children, Dhanyashree and Dhanush got admission in this academic year. Bhavyashree and Divyashree, sixth standard students, are the children of chandrashekhar and Vishalakshi from Kairangala. They had joined this school in the third standard.

Keerti R Gatti and Keertan R Gatti, both seventh standard students, and children of Ramesh and Gayatri couple from Bagambila got admission this year. Sujan and Suhan, children of Sridhar and Vasanti couple from Daigoli, are in the eighth standards. They got admission here last year. Prashanth Jathan and Sujatha are the parents of Sreeshanth and Sushanth from Konaje police quarters. They had joined when in eighth standard. Prajna and Preksha are in PUC. They are the children of Divakar and Usha couple from Pajeer. Moksha and Mokshita, children of Kurnadu Chandappa Kulal-Vedavathi couple had joined here when in PU first year.

Principal of the school, Shreehari, says that the school has been imparting refinement and Indian culture along with education, towards transforming the students into noble citizens. He said that training in different art forms including Bharatnatyam, Yakshagana, Karate, folklore etc are being given here. He said he is happy that his school has 11 twins as students.

Rajaram Bhat, convener of the school, has been exempting one of the students from among twins, from the need to pay fees if twins get admitted here together. This benefit can be obtained till PUC second year as the institution conducts classes till PU second year.