Panaji, Dec 3 (IANS): In a clear warning to the government agencies, Goa Archbishop Fr. Filipe Neri Ferrao on Friday appealed to all authorities to refrain from illegalities which are detrimental to the preservation of the state's 17th century UNESCO-recognised Church complex in Old Goa.

Ferrao was delivering his sermon on the occasion of the feast of St. Francis Xavier, a Spanish saint whose relics are preserved in the Church complex, and is regarded as the patron saint of Goa.

"In this context I would like to express the solidarity of the church in Goa with several of our brothers and sisters of different faiths who have been undertaking various demonstrations for many days now against some obnoxious activities in this heritage site," Ferrao said. 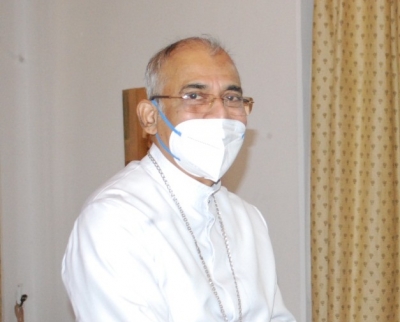 "I strongly appeal to all those in authority to refrain from any acts and decisions which are illegal and detrimental to the preservation of the religious and heritage sanctity of Old Goa," he added.

Ferrao's comments come against the backdrop of a raging controversy surrounding the construction of an allegedly illegal bungalow, located near the heritage St. Cajetan Church in Old Goa.

Activists and opposition parties have alleged that the construction is illegal and in violation of the state's construction and heritage norms.

While the construction project was undertaken by Mumbai-based realtor Manish Munot and Suvarna Lotlikar, wife of former Goa Forward party treasurer Suraj Lotlikar, Munot's wife Shaina NC, who is a BJP national spokesperson has said that "we have nothing to do with this".

Following the protests, the Town and Country Planning department of the Goa government has alleged a fraud in the allotment of permissions for the construction project. The local village panchayat has also issued a show cause notice in connection with the project.

Ferrao said that "offensive interventions" like illegal constructions may also lead to derognisation of the Old Goa church complex as a world heritage site.

"We should know that any undue or offensive interventions even by legitimate stakeholders in and around these monuments can have grave consequences and even attract the derecognition of their world heritage status which would be a tremendous and severe loss to Goa," Ferrao said.