2 Omicron cases confirmed in State, no cause for panic: Dr Sudhakar

Bengaluru, Dec 2: Two Omicron cases have been confirmed in the samples sent for analysis from the State to the Centre for genome sequencing and both the cases are not serious and there is no cause for panic, said State Health and Family Welfare as well as Medical Education Minister Dr K Sudhakar said on Thursday.

Speaking to reporters in Bengaluru, the minister said virus has been found test sample of a passenger who arrived from South Africa on November 20. The visitor had stayed in a hotel and his test report was positive with any symptoms. The visitor had got himself tested in a private laboratory on November 23 and got a negative report, the minister said.

The minister said the virus has been detected in the test report of a 46-year-old doctor. His test report was positive and he immediately got himself self-isolated. When his primary and secondary contacts were tested, 5 persons have got positive reports and all of them have been admitted in government hospital and kept under strict observation. There is no problem so far.

Dr Sudhakar advised the people not to panic but strictly follow the Covid safety norms. As soon as the Chief Minister returns from Delhi, a high level meeting will be convened and suitable decisions will be taken for Covid control, he said and appealed to people not to spread rumours.

The minister said Karnataka has managed to administer 9.5 lakh doses of vaccines on Wednesday during a special Covid vaccination drive

A total of 7.50 crore doses have been administered so far in Karnataka, he said.

In comparison to higher populous states, Karnataka ranks 2nd or 3rd in vaccination, Dr Sudhakar said and pointed out that this achievement is possible by the committed efforts of health department officials and staff.

Since assuming the office, Chief Minister Basavaraj Bommai has been putting a lot of emphasis on vaccine drive, the Minister said.

At times, when even in developed countries, people are hesitant to take the vaccine, Karnataka is seeing large numbers of vaccines administered to its citizens.

Both doses must be taken to gain greater immunity, 2 doses should be taken for complete immunity and to fight the virus, the minister said.

Preparations are made at airports for Covid testing and are monitored. Passengers from overseas have been notified of checking and inspection. Preparations are being made to give test results within 3 to 4 hours, Minister informed the media.Two types of tests are being conducted at airports - the Abbott and RTPCR. The Central government has fixed Rs 3,000 for the Abbott test. Results can be obtained in just half an hour to 1 hour from Abbott.

False news is being circulated on social media that Abbott test isn’t accurate. Abbott testing is also as much accurate as RTPCR, Dr Sudhakar said.

Rs. 500 is fixed for RTPCR testing at airport. Result is obtained in 3 to 4 hours.

The government's intention is not to allow spread of the virus.

Many working class people are demanding to allow them to go home before testing and asking to be tracked later. The Government has gained experience in the last two years, Minister said.

He appealed to all international travelers to cooperate with the existing measures.

The BBMP commissioner has requested that for framing rules to allow those who have taken two doses of vaccine in shopping malls. This will be discussed with the Chief Minister after he returns from Delhi visit, he said.

Meanwhile, Higher Education Minister Dr C N Ashwath Narayan, who himself is a medical doctor, confirmed that the Omicron Covid variant has resulted in creating concern but there is no proposal for ordering closures of Cinema theatres, Hotels and Malls. 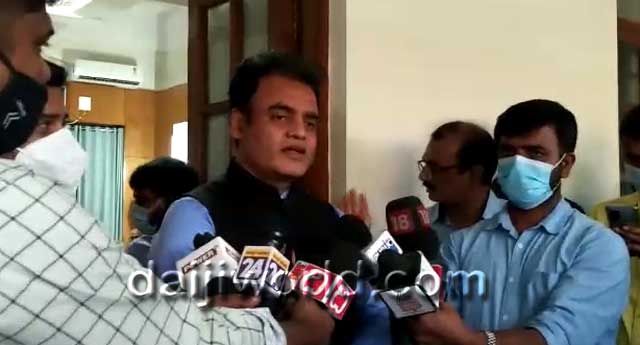 However, the minister said the government would shortly take a decision on making only the fully vaccinated persons to be allowed to visit Cinema theatres, Hotels and Malls.

Dr Ashwath Narayan clarified that there is no threat to life from the Omicron virus. But in the interest of safety and precautions, it is necessary that those who visiting public places must get themselves vaccinated and the State Government will take a decision on the issue soon.

All the persons visiting cinema theatres, hotels, malls and other public places must mandatorily wear masks, the minister said and pointed out that the government will take further decisions based on the situation in the 11 countries which have reported Omicron cases.

RTPCR testing has been made mandatory for those arriving from Maharashtra and only those with negative reports will be allowed to enter the State. Saving lives and livelihood is a matter of primary concern for the government, he said.

Title: 2 Omicron cases confirmed in State, no cause for panic: Dr Sudhakar