Karnataka's economy on the path of recovery: CM Bommai

Kolar, Nov 23 (IANS): The economy of Karnataka is recovering after suffering setbacks during the Covid-induced crisis, Chief Minister Basavaraj Bommai said on Monday.

Speaking to the media persons after visiting rain-affected areas of Kolar district he said the GST collection has touched Rs 1,30,000 crore last month and it is expected to be around Rs 1,20,000 crore this month, he said.

"The economy of the country and the state suffered huge setback over the last two years due to Covid pandemic. Economy of the state in all sectors is showing good recovery after successfully managing the vaccination campaign," he said. 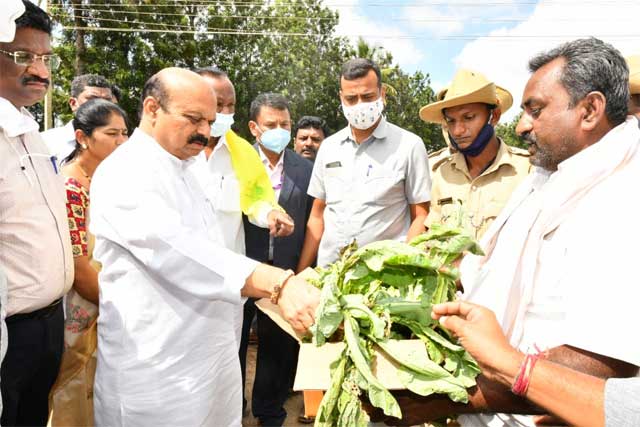 Targets have been set on tax collection and action is being taken to ensure better compliance.

The state is getting its share of GST collection every quarter, the Chief Minister said.

Replying to a question on providing houses for those who have been rendered homeless, Bommai said the Cabinet had cleared construction of 5 lakh houses.

The district administrations have been instructed to select the beneficiaries from each Gram Panchayat limits.

Crop loss compensation to be sent to farmers' A/Cs

Bommai on Monday said that officials have been directed to transfer the crop loss compensation amount to the affected farmers' accounts immediately.

Incessant rains have caused huge losses to the standing crops in the state. Starting from Narasapura, the Chief Minister toured the Kolar district extensively.

He said: "I have seen extensive damage to Ragi, vegetables, horticulture and floriculture crops. Flood water from Mudavadi irrigation tank has cut-off road connectivity in the area, About 790 houses have been completely or extensively damaged.

"Agri Crops in 48,333 hectares and horticulture crops in 6966 hectares have been affected, 189km length of roads and 34 bridges have been damaged according to preliminary reports," Bommai said.

The DCs had been instructed to disburse first instalment of Rs1 lakh immediately, Bommai said.

The state government has released Rs 500 crore for the repair of damaged roads and bridges. Schools and Anganwadis too had suffered damages and the repair work there would be taken up through the NDRF fund, he said.

Title: Karnataka's economy on the path of recovery: CM Bommai