Bambolim (Goa), Nov 20 (IANS): The Sunil Chhetri-led Bengaluru FC will look to forget the reversals of the previous Indian Super League (ISL) season when they take on last season's semi-finalists NorthEast United FC (NEUFC) at the GMC Athletic Stadium here later on Saturday in the eighth edition of the premier tournament.

Having established themselves as contenders for the top spot over the past few seasons, Bengaluru FC were unlucky to miss out on the top-four berth for the first time in their ISL history last season. 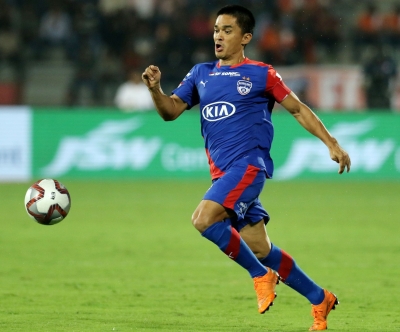 They had an unbeaten start to their previous campaign, winning three and drawing three of their first six games, but their campaign floundered during the latter half of the season as they failed to register a win in the following eight fixtures.

On the other hand, NEUFC displayed tremendous grit and determination in the 2020/21 season, recording their best-ever finish in the league stages, finishing third in the standings with 33 points. Khalid Jamil, who was handed the reins midway through the season, led his team to six wins and three draws in the final nine games of the season, which propelled them into the semifinals.

Bengaluru FC, the 2018/19 champions, have revamped their squad ahead of the new season, with a new-look foreign contingent, and several domestic signings too. A common trend noticed among their acquisitions in the summer window was a downward shift in the average age of players. Bidyashagar Singh, Danish Farooq, Prince Ibarra, Bruno Ramires, and Iman Basafa are yet to go past their prime.

They will however be missing several domestic players in the opening game due to injuries. Their injury list includes Suresh Singh Wangjam, Parag Srivas, Akashdeep Singh and Rohit Kumar. Harmanpreet Singh picked up a knee injury in the Durand Cup which has sidelined the forward for the entire season.

NEUFC have retained several core players such as Federico Gallego, Deshorn Brown, Khassa Camara, and VP Suhair for the new season, while letting go of Lalengmawia, Ashutosh Mehta, and Dylan Fox, among others. They have roped in Hernan Santana, Patrick Flottman, Matheus Coureur, and Sehnaj Singh.

Emanuel Lalchhanchhuaha is the only player unavailable for NorthEast United FC, which is a positive for Khalid Jamil's side as they head into their season opener.

Bengaluru FC have been the better side in this fixture, winning five, and drawing four of the 10 games they've played against NEUFC. Three out of the previous five encounters between the two clubs have resulted in draws, with the two fixtures last season also ending with no victors.

Sunil Chhetri could be the X-Factor for Bengaluru FC, as the prolific forward is coming off the back of an exceedingly successful SAFF Championship, where he emerged as top scorer and player of the tournament.

Title: Bengaluru FC keen to regain pride of place as they begin ISL campaign vs NEUFC