Mangaluru, Oct 27: Widening of national highway 75 between the city and Bengaluru has begun again. The work, which was taken up in 2017, had been abandoned halfway by the L&T company in 2017. Now the widening work on the 65 km stretch of the highway between B C Road and Addahole has begun. As per the plans, this project has to be finished by the end of 2023.

The work of widening the road between B C Road and Addahole had earlier been given to L&T company for Rs 821 crore. The company which started work faced a lot of hurdles in executing the work. 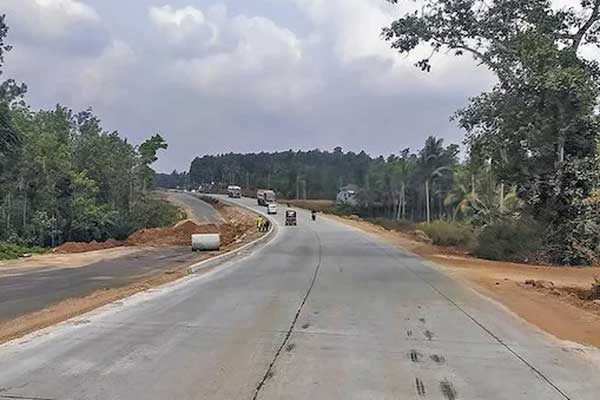 In order to straighten the road, some private lands had been purchased and converted into roads. There was a need to use about 21 km of forest land. Because of heavy rainfall, stones and soil had started to fall down from the hills on the road already dug up. Therefore the road once laid had to be built again. The company withdrew from the contract and sought a compensation of Rs 108 crore from the highways authority.

Now the work has been given to two companies, one from B C Road to Periyashanti, and another from Periyashanti to Addahole. Both the works have begun together. The work of demolishing buildings and other structures on the private land required for the road widening is going on. MP Nalin Kumar Kateel, is optimistic that the road work will be completed by the end of 2023.

In order to avoid problems, the process of acquiring the entire land required for the road widening has been completed beforehand. Private and forest land have been acquired. The buildings standing by the roadside at Kalladka town have been demolished, and the work of levelling agricultural land is going on at a brisk pace.