Karwar, Oct 21: Uttara Kannada MP Anantkumar Hegde, has expressed anger at actor Aamir Khan, for having acted in an advertisement that he said, hurts the sentiments of the Hindus.

In an advertisement for CEAT company, Aamir had given the message that bursting of crackers to celebrate festivals is bad for the environment. Anantkumar wrote a letter on October 14 to Anant Vardhan Goenka, owner of CEAT, urging him to withdraw this advertisement.

"If bursting of crackers on the roads creates traffic problems, offering of namaz on the roads on special days too affects movement of people and vehicles. If crackers create noise pollution, the Azan conveyed through loudspeakers in the mornings also gives rise to noise pollution. Don't you feel these things too should be shown to the people?" he wanted to know. 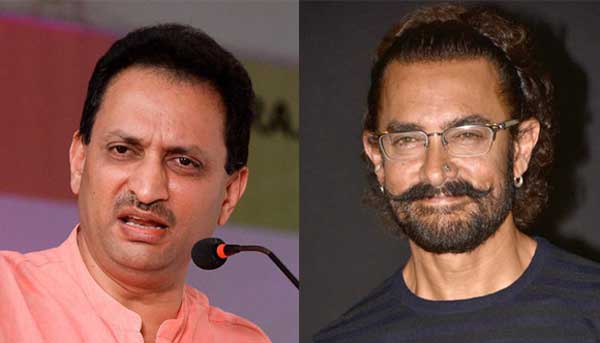 Hegde has posted this letter in the social media. He decried Aamir Khan by questioning whether showing Hindu celebrations in poor light is the only job he does. "Why is there silence about the observations in other faiths? Loudspeakers which make big sound in the mornings, offering of namaz in the middle of the road and other such issues can also be handled by Aamir Khan so that many problems get addressed," he has written.

Hegde feels that advertisements of this kind are part of trivial conspiracies employed to crush the Hindu sentiments. There is no dearth of anti-Hindu actors in India, he has remarked.

Full text of the letter by MP Anantkumar Hegde to CEAT CEO and MD:

Dear Shri Goenka, Your company’s recent advertisement in which Amir Khan advising people not to fire crackers on the streets is giving a very good message. Your concern for public issues needs applause.

In this regard, I request you to address one more problem faced by people on roads, i. e., blocking roads in the name of Namaz on Fridays and other important festive days by Muslims. It is a very common scene in many Indian cities where Muslims block busy roads and perform Namaz. At that time, vehicles like ambulances and firefighters vehicles are also struck in traffic causing grave losses.

I also request you to highlight the issue of noise pollution in your ads. Every day, loud noise is emitted from mikes arranged on the top of mosques in our country when Azan is given. That sound is beyond the permissible limits. On Fridays, it is prolonged for some more time. It is causing great inconvenience to people suffering from different ailments and taking rest, people working in different establishments and teachers teaching in classrooms. Actually, this list of sufferers is very long and only a few are mentioned here.

As you are very keen and sensitive towards the problems faced by the general public and you also belong to the Hindu community, I am sure you can feel the discrimination done to the Hindus since centuries. Nowadays, a group of Anti-Hindu actors always hurt the Hindu sentiments whereas they never try to expose the wrong doings of their community.

Therefore, I kindly request you to take a cognizance of this particular incident where your company’s advertisement has created an unrest among the Hindus. I hope in future your organization will respect the Hindu sentiment and will not hurt it directly or indirectly by any means.

Thank you and Happy Deepavali!