Bengaluru, Oct 21: The BJP has strongly in support of state BJP president and MP, Nalin Kumar Kateel, after he received widespread criticism for terming Rahul Gandhi as a drug addict.

Congress leader Randeep Singh Surjewala, who is in-charge of Karnataka, said that Kateel is speaking as if he has lost his mental balance. He said his own party leaders do not give importance to him, and felt that he needs to be admitted into mental health hospital.

In reply to criticism, the BJP said that telling plain truth often attracts anger. "The party, instead of taking to the streets for people-centric issues, is now fighting to keep a family satisfied and this is a tragedy," it said. 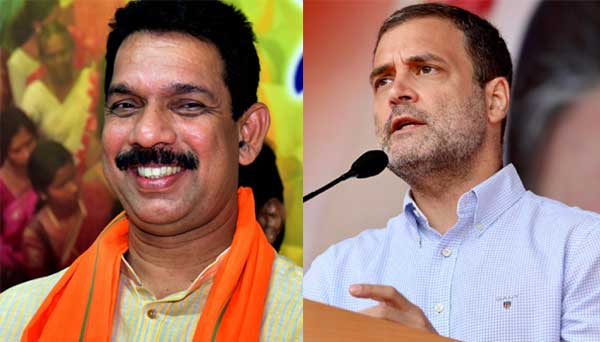 Chief spokesperson of the BJP, Capt Ganesh Karnik, addressing a press meet on Wednesday October 20, pointed out that Rajya Sabha member Subramanian Swamy, had stated in the media in 2016 that Rahul Gandhi was a drug addict, "Nalin has just referred to this statement. The Congress leaders were mum when the statement was originally made. It is funny that they are now coming forward to fight," he remarked. He criticised the Congress for failing to undertake any creative movement or agitation for the rights the people.

BJP state chief general secretary, Ashwath Narayan, said that when elections are around, both Siddaramaiah and Kumaraswamy act like they have been taken over by ghosts. "They issue irresponsible statements, duly forgetting the fact that they were chief ministers earlier. He sought immediate apology from the concerned people.

Minister for mines and geology, Halappa Achar, said that Nalin had spoken based on media reports and opined that the Congress was not justified in getting angry at the statement which reflects the reality. Minister K S Eshwarappa, asked Siddaramaiah to apologise to the people for terming Modi as a ‘thumb impression’ leader. Former minister H K Patil, accused Nalin of making irresponsible statements about Rahul Gandhi because of his distorted mindset. He said his party condemns the way Nalin shows negligence to his pubic life and condemns his statement.