Mangaluru, Jun 30: The date, time and venue are set and we are inexorably approaching them. The renaming of St Aloysius College Road as Mulki Sunder Ram Shetty Road is scheduled for July 2 at 10 am at the Vijaya Bank regional office – according to Vijaya Bank Workers’ Organisation. The renaming ceremony would be attended by an intimidating battery of VIP invitees. The existing road name, St Aloysius College Road, would be swept under their political weight. Many of them could be alumni of the venerable college evoking the tragic scene from Shakespeare's Julius Caesar when the fatally stabbed Emperor turns round to the assassin and says: “Et tu, Brute?” (You too, Brutus?) Yet, with the support of the same set of VIPs we can find an honourable way out to the relief and happiness of both the parties involved. Who are these parties? That calls for some historical background and related introspection.

To start with one of the seven hills of Mangaluru (Mangala) is steeped in history and had, and has, an identity deficit. It was variously called Light House Hill, College Hill, Idgah Hill, Bautagudda (hill) and even Court Hill. But, by far its most prominent occupant is St Aloysius College institution. So, naturally the road leading to the hill from Hampankatta was named St Aloysius College Road as per the sign board still existing. Now that road is being renamed after Mulki Sunder Ram Shetty, who was privy to the consolidation of Vijaya Bank to a front-ranking status. As the parties slug it out, we focus on contending parties and on the hill to which the one-way road leads. 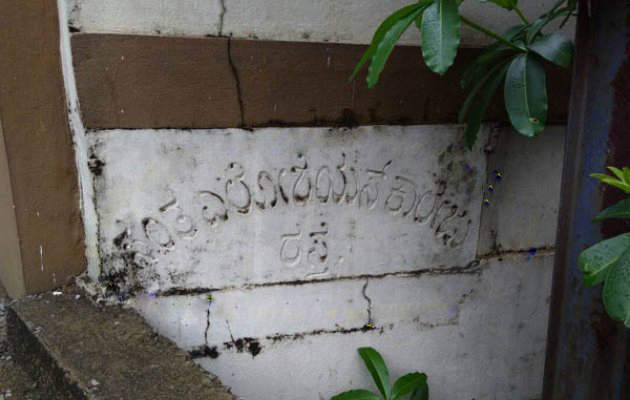 A city built on a hill cannot be hidden, says the Bible. That might have prompted Italian Jesuits to establish St Aloysius College on Idgah Hill in the centre of Mangalore 137 years ago. It is today popularly known as College Hill. But, it has an identity crisis. Whatever the name, this hill is king of seven hills of Mangaluru and is soaked in history.

The main approach to the hill is from Hampankatta, by a steeply ascending road which was earlier known as Light House Hill Road and now officially called St Aloysius College Road. It has another road approach from Jyothi Circle (now Ambedkar Circle). The flat top of the hill is dominated by the original college building with its tower block and the modern college building to the east. In between these two, and forming part of the old building, is the St Aloysius College chapel, which attracts a steady stream of tourists to view the paintings and frescos by Italian Jesuit Brother, Antonio Mocheni, on the walls and ceiling of the chapel, done between 1899 –1901.

The Italian Jesuits who founded St Aloysius College landed in Mangalore on December 31, 1878. While the instructional part of the college started in a bungalow at Kodialbail, the physical setting for the college was an imposing building, 496 feet long, which, with its tower block, has been a heritage landmark in Mangaluru.

St Aloysius College was the first degree college in the district and was affiliated to the Madras University, as the then South Kanara district was part of Madras Province. Until the reorganisation of the States, the college served the needs of higher education of students also from the Malabar region and Coorg regions. Started as a second grade college in 1882, it was upgraded to first grade in 1887. On the other hand the Government School, located between Hampankatta and Nehru Maidan, (now University College) was raised to second grade college in 1869 and upgraded to first grade college only in 1948.

The plethora of impressive buildings on the college campus were possible because of generous donors from Mangalore, elsewhere in India and abroad – specially alumni working or settled in the Gulf, UK, USA and Canada. One of the latest addition of buildings to the campus, IT Block, Centre for Information Technology, Research & Development, was declared open by Dr A P J Kalam, 11th President of India, on March 28, 2003. Opened on the same date by. George Fernandes, Union Minister for Defence, an alumni of the college, was Xavier Block for Science & Research. Dr Kalam was the second Indian President to open a building on the campus - Sanjeeva Reddy, 6th President, opened the Centenary Memorial Building on January 16, 1980. An earlier landmark, the new college building, was opened in 1946 by Governor of Madras, Lieut-G Sir Archibald Nye in “the Year of Interim National Government formed by the Hon’ble Pandit Jawaharlal Nehru”.

The other landmarks on the hill include the Light House, Idgah Mosque and the District and Sessions Court buildings. The mosque is a quadrangular structure where the Muslims offer Idgah prayers - as was done on June 25 to mark Eid. It is said to have been constructed by Tipu Sultan towards the close of the 18th century.

(The lighthouse is now disfunctional. The present lighthouse structure was constructed in 1900 and is 33 ft above high tide mark. The masonry tower crowned by tiled roof housing the light source is 18 ft high from the base. When functional, the light, meant to guide shipping traffic, was visible for about 17 km out at sea in clear weather. The lighthouse is now part of Tagore Park where a small library and reading room are located. The District and Sessions Court, a cluster of colonial red-walled tiled structures, was established in 1862 on the western-most spur of the hill).

Their peaceful co-existence is now threatened with the road re-naming controversy involving Vijaya Bank and the college whose campus hosts 14,000 students in its day and evening shifts. The bank, which has its building on eastern base of the hill, also has impressive history and is part of the Mangaluru scene as noted below.

Vijaya Bank is a public sector bank with presence across India. It was established by Attavar Balakrishna Shetty at Bunts Hostel in Mangaluru on October 23, 1931. Since it was established on Vijayadashami Day, it was named ‘Vijaya Bank. The objective was to promote banking habits, thrift and entrepreneurship among the farming community of Dakshina Kannada (then South Kanara) district. The bank became a scheduled bank in 1958. Between 1963-68 Vijaya bank grew steadily by merging nine smaller banks into it. Mulki Sunder Ram Shetty, who was the then Chief Executive of the bank, and now after whom the road is being renamed, is largely credited with these mergers. Presently Vijaya Bank establishments, like branches, display the photos of the founder, AB Shetty and Mulki Sunder Ram Shetty. The bank was nationalised on April 15, 1980.

The corporate office of the bank was shifted to Mahatma Gandhi Road, Bangaluru in 1984 and what remains in Mangaluru, on the road being renamed, off Ambedkar Circle, is the bank’s Regional Office and branch operations. Current logo of the bank, showing a man slightly bending forward and welcoming and offering its services, was registered in 1965 and is now being sought to be changed - with some employees opposing the move. Presently Vijaya Bank has a network of over 2,000 branches and 4,000 customer touch points, including ATMs, spread across India.

The latest controversy involves renaming St Aloysius College Road, for which a resolution in MCC is said to have been passed two years ago and notified - which apparently the college was not aware of. Even the mayor has expressed her unawareness about the background to the subject. Mayors and corporators are floating entities and the responsibility for the present messy situation should squarely lie with the permanent employees of MCC.

But, all is not lost. There is a way out under the “Possession is nine times law” principle which is derived from legal principle where the satisfaction of 10 points legitimated ownership; hence "nine points of the law" constituted close to full ownership. Under this principle, the existing name board is evidence and should have decided the issue. But, it is too late now.

However, we can resort to the ancient Solomon’s judgment noted in the Bible. Solomon was the Biblical king most famous for his wisdom. Perhaps the best known story of his wisdom is the Judgment of Solomon wherein two women each lay claim to being the mother of the same child. Solomon easily resolved the dispute by commanding the child to be cut in half and shared between the two. One woman promptly renounced her claim, proving that she would rather give up the child than see it killed. Solomon declared the woman who showed compassion to be the true mother, entitled to the whole child.

It is too late to expect Vijaya Bank to cede its claim. But, it is not a disaster. Modifying Solomon’s judgment to apply to an inanimate entity, we can divide the road into two stretches and allot them to the two parties. The ascending road from Hampankatta to Idgah Masjid can be retained as college road and from there to Ambedkar Circle, where Vijaya Bank’s Regional Office is located, can be named after Shetty.

Let us go by the wisdom of King Solomon and the dictum of philosopher Bentham and get out of the present messy situation to the happiness and relief of thousands of students and alumni of the college and ex and present customers of the bank.

“Silence is golden” is the lazy excuse for inertia. Let us, especially those battery of VIPs scheduled to attend the renaming function, work for the solution offered by Solomon and Bentham. I conclude with John Milton (1608-1674), English poet:” Awake, Arise or be forever fallen”.

I am an interested party vis-à-vis both the college and the bank. I have done my graduation from the college and had been lecturer there for one year (1960). I have been active in the college alumni association, including as honorary secretary for some years. I have banked with Vijaya Bank for 25 years - first in its Ballard Estate branch in Mumbai and now with the Bondel branch in Mangaluru - and it has been a delight.