Ahmedabad, Jun 1 (DHNS): In an effort to woo tribals in Gujarat, BJP national president Amit Shah on Wednesday had lunch at a tribal household in Devaliya in Chhota Udepurdistrict.

The BJP chief is hoping that the lunch diplomacy would lure sections of the society that traditionally voted for the Opposition. His lunch diplomacy began in West Bengal, where he ate at the household of a Dalit family and followed it up with a similar lunch date with another Dalit family in Varanasi.

On Tuesday, Shah chose to lunch at the house of party cadre Popatbhai Rathwa. Before the BJP chief could arrive at the Rathwa residence, party workers fitted the place with a new toilet, a washbasin, an LPG stove and a few coolers. 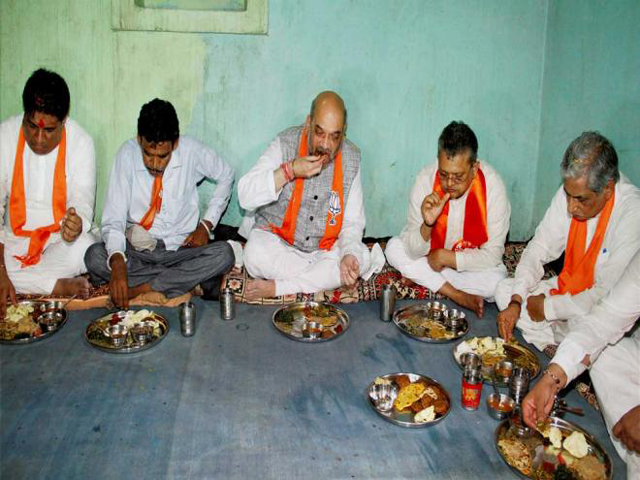 The BJP chief was in Chhota Udepur to participate in the Vistarak programme that asks every party worker to reach out to voters across the state, right down to the 47,000 plus booths.

The presence of the Opposition here is so strong that five of the six taluk panchayats and the Chhota Udepur district panchayat are ruled by the Congress.

In 2014, when the BJP triumphed in all the 26 Lok Sabha constituencies, it was trailing in Chhota Udepur.

With growing opposition from the powerful Patidaars and the Dalits following the flogging of four youths by cow protection groups in Una in Saurashtra, the BJP is turning its focus on other communities like the tribals, whose support could off-set any loss of vote share from its traditional backers.

The party has been holding a series of events in the tribal belt for the past few months to win their support. Shah told newly inducted workers in Devaliya village that the party needs to work hard in Gujarat, despite the state remaining its fortress. Under the prime minister’s leadership, he said the party could win 150 out of 182 seats.