Dr Arunachalam Kumar: Neither age nor cancer could destroy his rationalist ideals

Mangaluru, Jan 15: Call him a genius, an eccentric, an exceptionally talented man, multifaceted persona, a polymath, a polyglot, rationalist, ardent cricket lover, a student leader, bird watcher, lateral thinker, popular teacher, an artist, nature lover, cryptic crossword expert, a writer, blogger, author, humanist - and the list can go on and on. That is Dr Arunachalm Kumar, for you, a perfect example to show that there is an exciting link between geniuses and eccentric behaviour. This ex-Professor of Anatomy of KMC Mangaluru and then a Dean at Nitte with his signature shoulder length tresses and equally striking salt and pepper beard, is a bizarre yet a popular personality with an array of interests in a wide range of fields. His life is full of exciting incidents giving him a larger than life image.

It was Dr Arunachalam who had predicted cricketing god Sachin Tendulkar’s back injury in 1998-99 just three months before the actual injury that sent shock waves among the innumerable fans of the cricketing god. Of course it is Dr Arunachalam who had also hinted about the powerful earthquake of Indonesia that resulted in the devastating Tsunami of 2004 along Chennai coast, almost three weeks before the actual tragedy. The sad part was that these predictions weren’t taken with the seriousness that deserved even though Dr Arunachalam had predicted them based on his research and by understanding human anatomy. Also the fact that he is based in a small city like Mangaluru, his prophetic diagnosis (in the case of Sachin) was not taken with the gravitas usually accorded to researchers from metros and bigger cities.

Despite such implausible credentials and huge popularity wherein his students even now vouch for his brilliance and humanism Dr Arunachalam, now 67, though battling lung cancer for the last one and half year, is firm on his rationalistic thinking and approach which shows that his thoughts and beliefs are firm and unshakable. In his life’s journey this weird genius weathered several Tsunamis both personal and professional only to emerge stronger without having second thoughts on his rationalistic beliefs. He has acknowledged that it was his rational thinking that enabled him to undertake research in various topics and also kept him in good stead. His prolific research activity also got him listed in the Limca Book of Records as India’s most prolific research scientist.

Son of an IAS Officer Dr Arunachalam who originally hails from Chennai came to Mangaluru/Manipal for his education and has since made Mangaluru his home. Due to his inter-caste marriage he was declared persona-non-grata by his parents and siblings. But all the bad vibes have gone following the crisis in his personal life and now is ill-health. His parents are in their 90’s and live in Chennai and they and his other siblings have extended whatever financial and moral support they could to their son. 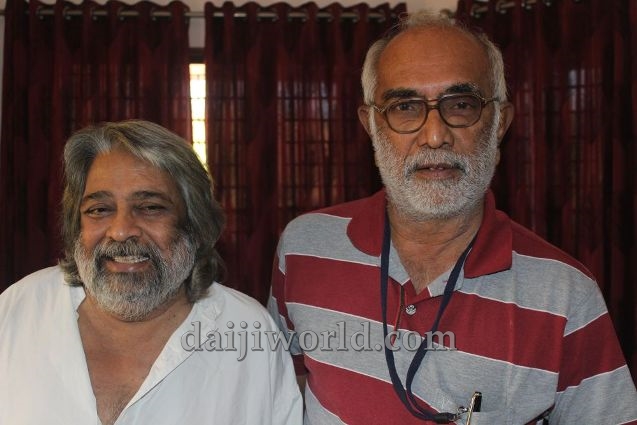 Looking at his petite personality one wonders whether it is the same man who had given sleepless nights to some of the well known the heads of the educational institutions when he was a student during his heydays as President of KMC Students Association at Manipal and Mangaluru in 1969 and 1972 and as President of All College Union of SK in 1972. There is another major achievement to his credit which not many of us are aware of. It was under his leadership the private bus operators of undivided Dakshina Kannada District agreed to issue bus passes for students in for the first time in 1972 benefitting millions of students over a period of 45 years.

With myriad activities as a student leader and with many firsts to his credit including a month old strike in KMC Dr Arunachalam irked some of his professors who even vowed not to pass him until he chopped his shoulder length hair. Fortunately, they did not fulfil their oath and even after his radiotherapy, his hair has refuelled to budge from its roots. Known for his witticism Dr Kumar is quick to point out jokingly that he is being treated for cancer by those who could not get his hair chopped off and even now he says they have failed miserably once again as his locks refuse to part from him. 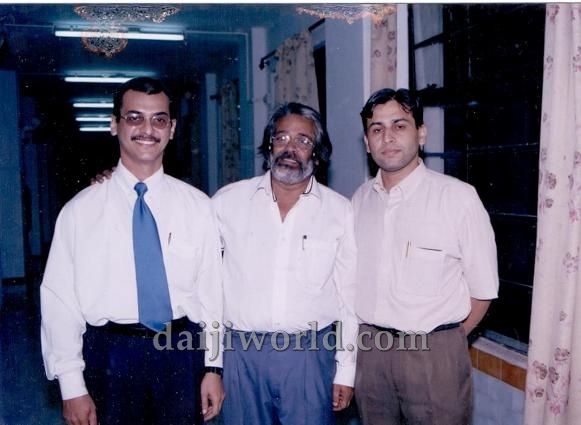 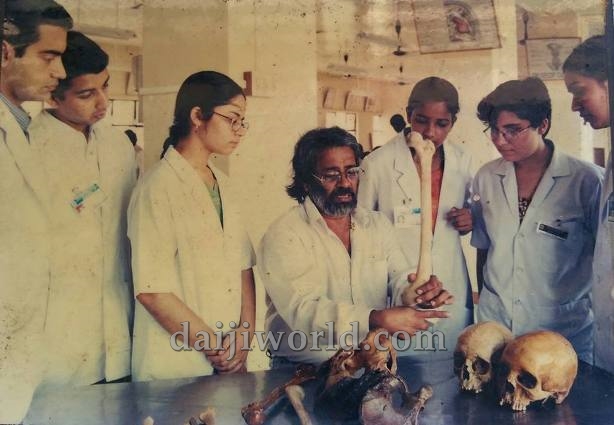 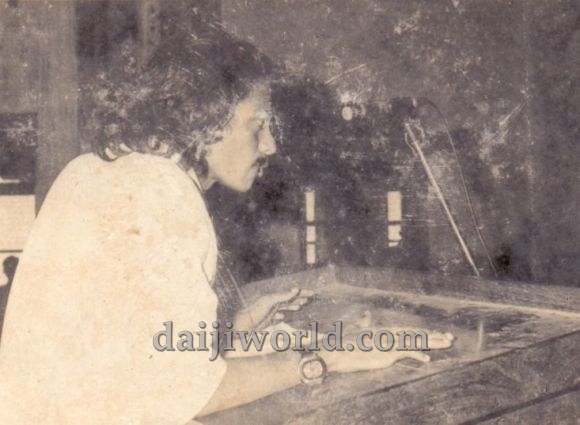 Speaking as a student leader 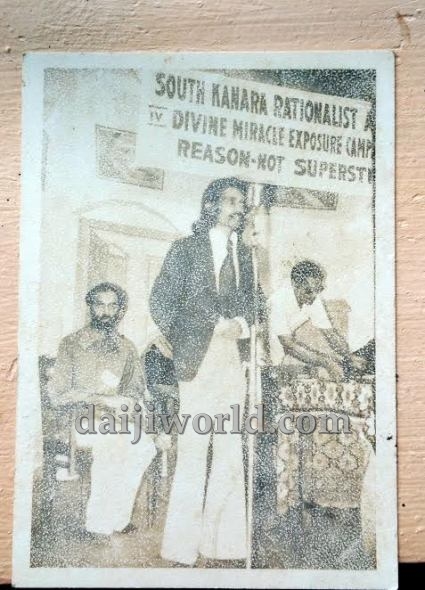 Speaking at a rationalist association programme 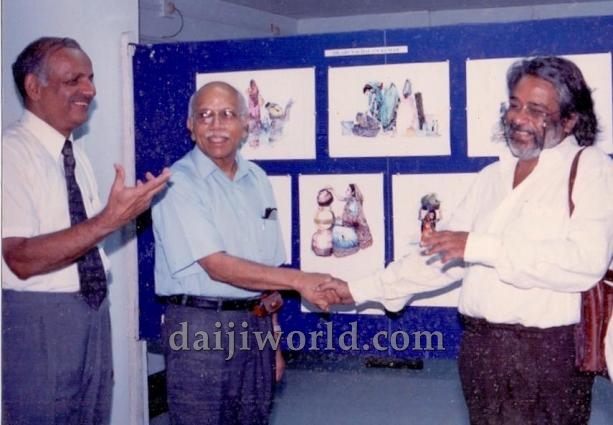 With Dr B M Hegde and Dr H S Ballal, both former VCs of Manipal 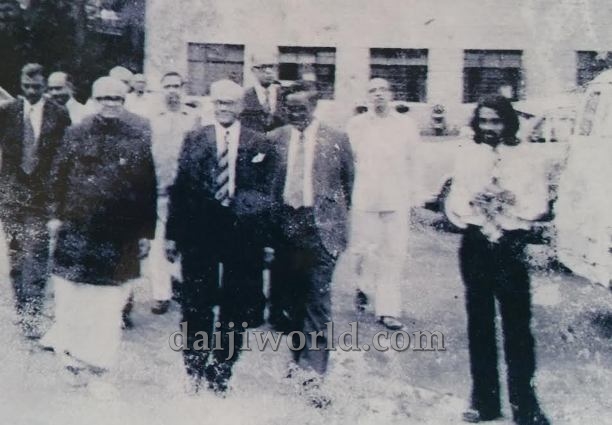 With Dr T M A Pai

I met him in his home at Manchi, Bantwal in the outskirts of Mangaluru where he has built a beautiful house because he wanted to settle in the interiors away from the city’s choked atmosphere. Today, he is in the loving care of Lakshmi, her husband Ravi and their daughter Bimbli who shower him with abundant love and care. Ironically, Lakshmi had come to his home as a playmate to his daughter when she was 11 and Dr Kumar along with his friends were instrumental in her getting married to Ravi despite several impediments that came their way. Luckily for him Lakshimi and her family is able to show their gratitude in their own way by taking care of him. Ravi who was working as a technician in the hospital has given up his job to take care of Dr Kumar. Under their protective care he is trying to come to terms with the most difficult period of his life but without any compunction. Their daughter Bimbli gives him the hope to bear the pain and prolong his life. His body language and even his blog writings exude positivity, which is not surprising for those who know him from his young days as the student leader and founder of All College Students Union in South Kanara.

As a student leader with a revolutionary streak he rebelled against the injustice and some established prejudices. Naturally he had to face some of the toughest moments of his life including a virulent attack on him on stage when the negotiations were going by the goons hired by the management of the institution. In yet another unexpected development he recalls that he was giving a speech during the first meeting of a strike call given by the union in Udupi. Suddenly the door of the meeting hall opened and he saw his father who was fetched from his native place by the management by flight to give him a first-hand glimpse of his son’s activities. Though his father shouted at him, upset by what his son was doing, nothing could mellow down the rebellious Dr Arunachalam Kumar.

Dr Narendra Nayak was also the colleague of Dr Arunachalam and he recalls the first meeting the rationalist association held at the Don Bosco Hall in 1976 at a time when the emergency was on. Dr Arunachalam recalls some of the issues they had to face as they had booked the Don Bosco Hall for the first ever programme of rationalists in Mangaluru where eminent rationalist Abraham Kovoor was to address a gathering. The priests wanted to cancel at the last minute when they came to know it was a meeting of rationalists as the hall belonged to the Capuchins but could not. Dr Nayak and Arunachalam recall that the priests were sitting in the front row stern faced on that day, ready to bundle out the rationalists any time if they dared speak anything against god or religion. Fortunately, nothing untoward happened in that meeting and the first meeting of the rationalists in Mangaluru was a success and it succeeded in putting sturdy foundation for the Rationalist Association of South Kanara which is working robustly even after 45 years.

The Going Not Good

It was in March 2015 that Dr Arunachalam, whose interest in biodiversity is well known, stopped his car to identify a snake that had just passed across his car. In his curiosity to find out what snake it was he slipped and fell on the road but he succeeded in identifying the snake. A persistent pain in the chest even after several days of the fall took him to a doctor who advised him to take an x-ray of the chest. It was this x-ray which revealed that his right lung had completely conked off as a big tumour had engulfed the entire right lung. A biopsy confirmed he had lung cancer and without surgery he could live for six months to one year by the Apollo Hospital of Chennai where he was referred to for treatment. With surgery that included removal of some of his ribs, he had 15 per cent chance of extending his life for 3 years. But Dr Arunachal did not opt for surgery and decided to beat cancer with available medication. 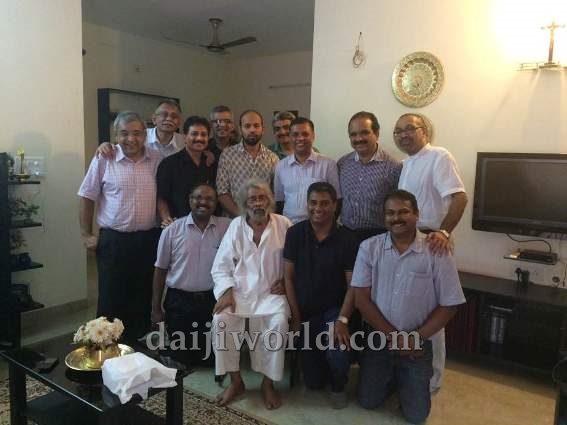 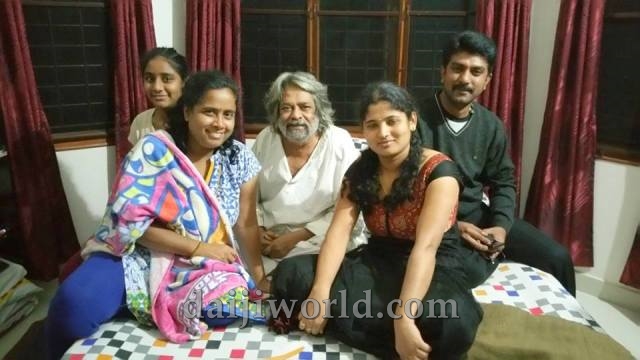 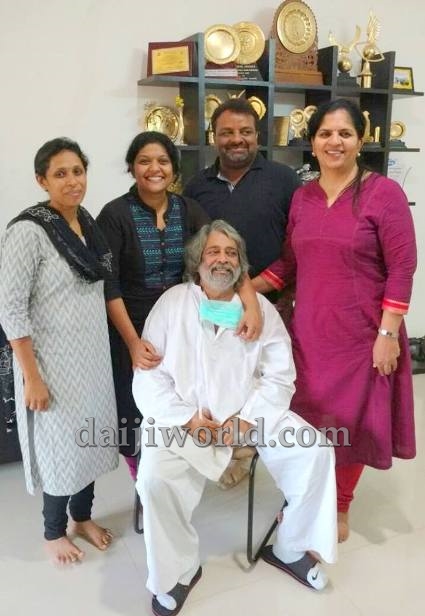 Being a blogger Dr Kumar wrote only about his cancer in his blog and somehow his students realised that they need to mobilize resources for his treatment. Due to some crisis in his personal life he was financially broke and he had to pay back huge loans. When one of his students posted about ‘paying and not merely praying for his health’ generous contributions flowed into his bank account. Students could collect about Rs 22 lac and the FB post got more than 10,000 comments. Now his cancer treatment requires huge money which he could not afford. His students spread over different parts of the globe, voluntarily chipped in and he had a reasonable bank balance for his treatment.

Fortunately, the tumour almost disappeared and he attributes it to the positive spirit he imbued due to the support and sustenance of his fans and admirers.

Though he was without medication for over a year following the shrinkage of the tumour the bad news came as a repeat scan revealed the tumour which was lying dormant has gone berserk. His Doctor at the Apollo hospital gave him a re-hope by recommending immune-therapy as an ideal drug for smokers and hence now he is on immune-therapy as this new treatment is called. He has been recommended a minimum six infusions each infusion costing over Rs 3.25 lac which is beyond his means despite generous contributions from his students. 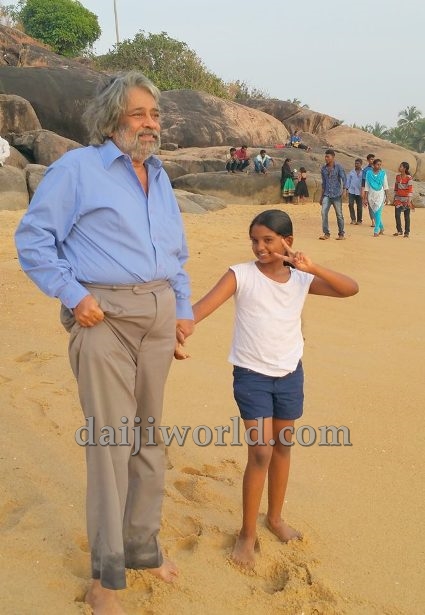 With Lakshmi and family

Faced with such a duality of whether to prolong his life or not through costly medication he is constantly egged on by Lakshmi’s family and also by his students and friends not to give up his fight, a characteristic which is synonymous with his personality. But as he contemplates the options before him he wonders whether it is worth spending another 20 lakhs ore more just to live a bit longer or to prolong his life by undergoing the trauma that comes with it. May be these thoughts are just a passing phase of the painful life he has been leading for almost two years now. Except for his swollen arms he looks perfectly normal for anybody who is not aware of his condition.

Despite all this, the desire to live is very quite palpable even as he contemplates various options to deal with the situation arising out of his treatment.

He does not look emaciated, his hair is still intact and he still talks about the good old days of his student period and about his various activities without any rancour. But it is his torso which mirrors the brunt of the chemotherapy, radiotherapy and immunotherapy he has been undergoing as part of the cancer treatment. But ‘thank god’ his rationalistic spirit still remains intact despite the upheavals.

Title: Dr Arunachalam Kumar: Neither age nor cancer could destroy his rationalist ideals