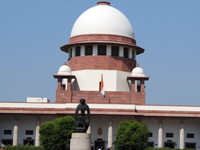 New Delhi, Aug 1 (IANS): The Supreme Court Friday told the central government to take steps to fast-track the criminal justice system so that cases can be decided expeditiously instead of lingering for years.
A bench of Chief Justice R.M. Lodha, Justice Kurian Joseph and Justice Rohinton Fali Nariman said the creation of additional courts coupled with related judicial infrastructure should be "substantial and not just symbolic".
"Criminal justice system is not moving at the pace I would like it to move," Chief Justice Lodha said adding: "I think time has come that all efforts should be made to fast track the criminal justice system that needs more courts."
Saying that the institution of fast tracking trial in criminal cases is not in existence and as and when demand comes they earmark a special court for the trial of cases relating of women and senior citizens, the court said: "Now there is a demand for fast tracking the trial in criminal cases against MPs and MLAs (legislators)."
Holding that good governance and expeditious disposal of criminal cases go together, the court said: "Pendency of criminal cases for 10 years does not augur well for democracy."
The apex court suggested a meeting of law secretaries and chief secretaries of all the states be convened for taking a comprehensive look at the problem to arrive at a concrete solution.
The court's observation came in the course of hearing a petition filed by National Panthers Party chief Bhim Singh, who sought the release of Pakistani prisoners who have already completed their sentences but were still languishing in jail in violation of Article 21 (Protection of life and personal liberty).
Bhim Singh told the court that there are cases where investigation has not been completed or the trial has not started.
"It is high time that central government takes positive steps in consultation with the state governments in fast tracking the criminal justice system so that criminal justice is delivered expeditiously," said Chief Justice Lodha
"The idea is that the criminal justice system is fast tracked in the country. Cases pending for decades is not good. It needs to be done fast," he said putting the onus on the government.
"As a Chief Justice of India I haveA my own limitation. I can't constitute courts."
"The state governments too have their own limitations. Therefore there has to be a system to fast track the criminal justice system. The addition of new courts has to be substantial and not symbolic."
Asking Attorney General Mukul Rohatgi to look into the issue, the court said: "Attorney general, you are the face of the executive (government) before us. You are attorney general of India. You must look at the problem and study and see that criminal justice system is fast tracked."
The court gave Rohatgi four weeks time to respond to its concerns over fast tracking the criminal justice system.
Referring to the requests coming to him to set up special courts to hear some matters, Chief Justice Lodha said setting up the special courts could not be at the expense of the other cases getting delayed.
"You have to come out with a framework stating that these kind of cases needs to be fast tracked," he said, adding: "Within the existing system, it is not possible. If you fast track one category of cases then cases of other categories suffer."
Under Article 21 (of the constitution) a person whether Indian or foreigner can't be incarcerated beyond this sentence for the offence he has committed, the court said.
Agreeing with the court's observation, Rohatgi said that problem was that Pakistani governments in some cases were not admitting such people as their nationals.