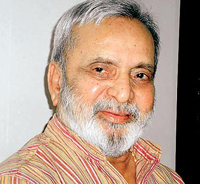 The complaint alleges that Ananthamurthy, in his book, 'Bettale Puje Yaake Maadabaaradu', had branded the Kola of Panjurli Daiva as theatrical act, besides claiming to have pissed on the rock form representing Panjurli Daiva. The complainant has said that these acts have hurt the sentiments of Hindus.

The complaint has sought initiation of legal steps against the above accused, besides placing a ban on the sale, circulation, and distribution of the said book.

The police have received the complaint and filed first information report.

In the meanwhile, Vishwa Hindu Parishat said that of late, there have been increasing incidents of hurting religious sentiments and beliefs of Hindus by deriding Hindu gods, Daivas, Naga etc. Warning those indulging these things that Hindus will not tolerate these things, it has asked them to immediately stop such activities.

In a joint statement, provincial convener of Bajrang Dal, Sharan Pumpwell, and working president of Vishwa Hindu Parishat, M B Puranik, have said that using the religious belief systems of Hindus like Daivas in processions, plays, cinema and other stages, or insulting or deriding such things should not be resorted to. They said that they have already approached Censor Board, heads of theatre groups and printing companies and various government departments to take steps to ensure that Hindu gods and Daivas are not shown in poor light in tele serials, internet, caricatures, short stories, novels, dailies and other publications.