The CCB police got definite tip off that nine people are residing at a rented house at Manchila of Ullal and are planning to loot a jewellery shop by drilling a hole. Police raided the house and arrested Bhaskara Belchapada (65), Kanyana Chenniah Moole native, residing presently at Gandhiwadi of Gujarat, Dinesh Rawal alias Sagar (38), Bista Roop Singh (34) and Krishna Bahadur Bogati (41), all natives of Nepal, Mohammed Zamil Sheikh (29), Inmamam Ul Haque (27), Imaddul Razak Sheikh (32), Bivul Sheikh (31) and Imran Sheikh (30), all residents of Jharkhand. 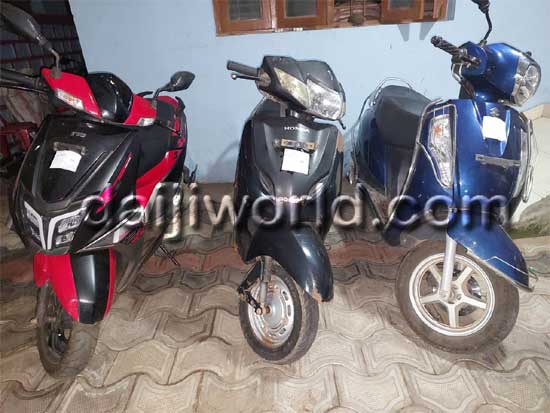 All the accused are the members of infamous Sahib Ganj gang of North India origin. They had come to Mangaluru by train 15 days ago with the intention of looting Super Jewellery shop at Thokottu. In the beginning they were residing at a lodge of Thokottu and later shifted to a rented house at Manchila. The value of the things confiscated from the arrested is Rs 2.9 lac.

The accused used to move around on local number plate scooters to avoid any suspicion. All the accused have several cases filed against them in many states.