Puttur, Nov 30: An auto rickshaw driver died on the spot on Tuesday November 29 evening at Bollaru of 34 Nekkiladi village in Uppinangady after an ATM cash dispensing vehicle hit his auto.

The deceased is identified as Vasu Poojary (54), son of late Anni Poojary of 34 Nekkiladi's Subhash Nagar.

Vasu Poojary was coming towards Uppinangady when an ATM cash dispensing vehicle on B C Road collided head-on with the auto that was driven by Vasu Poojary. 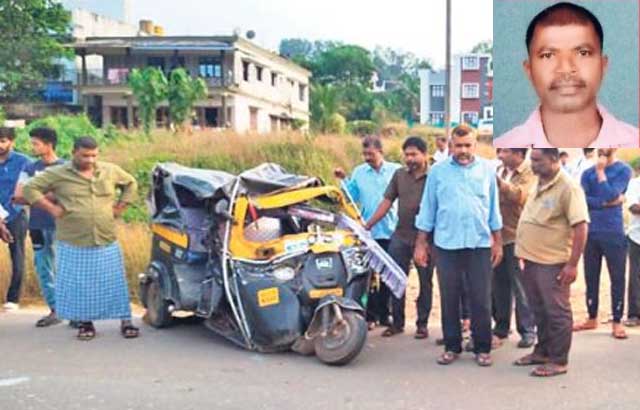 It is learnt that the auto driver was speedily coming in the wrong direction leading to the accident.

The auto that he was driving was badly mangled due to the impact of the accident. Passengers who were in Vasu Poojary's vehicle escaped unhurt.

Uppinangady police and Puttur traffic police personnel inspected the accident spot and a case was registered.

Vasu Poojary was working in a cool drinks company at Uppinangady and he hailed from a middle-class family. He was driving his own auto rickshaw during his spare time.

He lived in Subhashnagar. His daughter was married while one of his sons had dropped out of school and another son was attending school. He was the sole breadwinner of his family. He is survived by wife, a daughter and two sons.