Udupi, Oct 9: Pond (Pushkarini) of the temple is considered as sacred. Water from the pond is used for various religious works including Abhisheka of Gods or Goddesses. However, the pond of the renowned Kotilingeshwara temple in Koteshwara is polluted and the fish in the pond are dying.

Sewage water is getting mixed into the pond from the north eastern side of the lake. A white layer is seen on the surface of the water. There is a drain that flows on the north east side of the pond to which polluted water from some industries flows. When the water gets filled in the drain, it enters the pond, nearby water bodies and farm lands. 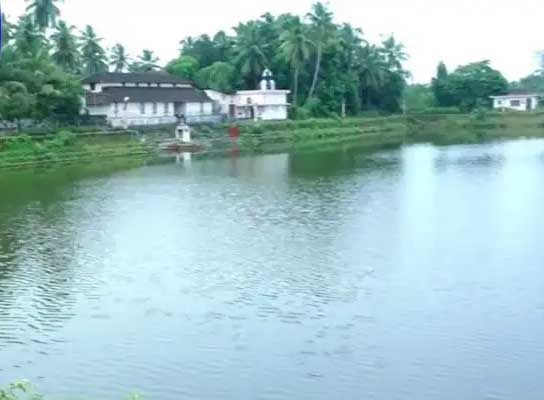 As the water from this pond is used to give as holy water to the devotees, there is every chance that it might spoil their health. In addition, devotees take bath in the pond as well. So the public have raised a complaint in this regard with Koteshwara gram panchayat.

Krishna Golla, president of Koteshwara gram panchayat said, “We have received complaints from locals about the water of pond of the temple getting polluted. The complaint also accuses a local rice mill of letting water into the drain. However, the concerned say that it is not their problem. For the well-being of the public, the sample of pond water has been sent to a laboratory for analysis. Once the report arrives, further action will be taken.”