Gadag, Oct 6: A Maharashtra emblem has been found printed on the ticket of a North West Karnataka Road Transport  Corporation (NWKRTC) bus instead of the regular two-headed Gandaberunda emblem of the KSRTC.

The bus conductor tore and distributed the tickets to the passengers bearing the Maharashtra emblem that travelled from Doni village in Mundargi taluk to Gadag town. This is not all. All tickets that are torn and distributed to passengers on the Gadag-Hubballi, Hulakoti-Gadag bus routes and buses going from villages towards the town carry the same Maharashtra state emblem.

This lapse was identified by a passenger on the Doni-Gadag route and brought it to the notice of pro-Kannada organisations.Mattu Biliyeli, a passenger from Puttaraju Bus Station in Gadag noticed this and called up a few pro-Kannada organisations. When the bus reached Gadag, passengers were joined by a few Kannada workers and activists who staged a protest and alleged the NWKRTC officials had committed a serious lapse and they demanded that serious action should be taken against the officials. 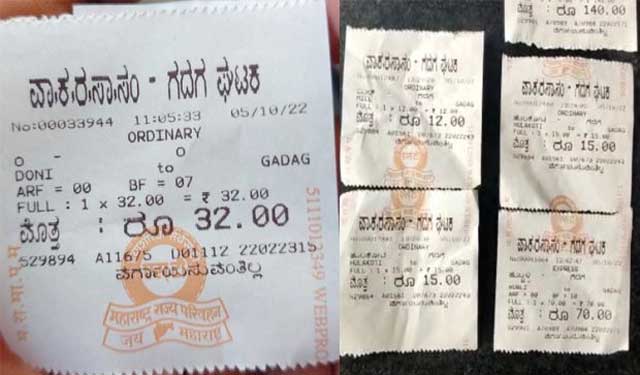 The NWKRTC officials who distributed the rolls to the bus conductors had turned a blind eye as they did not notice the lapse. Gadag divisional controller Hiremath has said that suitable action will be taken against those who had turned oblivious to the flaws that existed in the distribution of such ticket rolls.