'Feels Like Home 2' is bigger, better and mature as it promises hearty entertainment 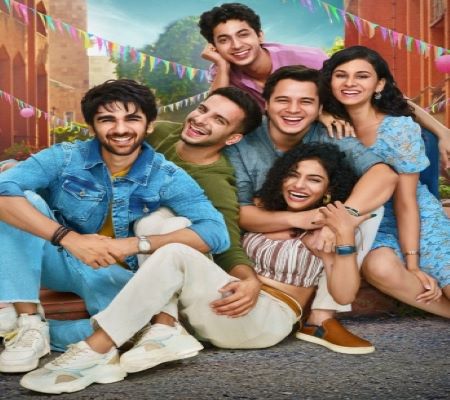 Lionsgate Play's new show, 'Feels Like Home' Season 2, takes forward the story of 4 boys on the cusp of adulthood. Their journeys transcend into more mature and real issues with drama, laughter and a whirlwind of emotions, and of course colossal mess-ups.

The second season factors in new sets of problems which are cleverly written and executed with fine transitions and relatable characters. Four friends - Lakshay, Sameer, Avinash and Akhil, continue to live in their larger-than-life mansion and deal with college life, career, personal and parental issues, along with complicated relationships.

The transition from boyhood to manhood is evident in the series as the four boys address real issues as life moves beyond just parties. As they deal with their own turmoil, the viewers will see them expressing their raw emotions for the first time. From anger to heartbreak, they openly cry and comfort each other.

Prit Kamani as Lakshay Kochhar finds himself dating his best friend's ex-girlfriend and after being a player for the longest, is struck with 'love', a feeling that's almost unfamiliar to him, which he finds impossible to handle. In the first season, he was a thick-skinned Delhi boy, but deep down he's caring and sensitive but in the second season we can see a change in him, as he brings out his caring side and emotes all his feelings. The arch and growth of his character and his performance is sublime. Prit Kamani has beautifully captured the essence of this transition.

The poet, Anshuman Malhotra who plays Sameer, is still grappling with the idea of performing in-front of a crowd and he finally ends up crashing a college festival to come out of his shell and overcome his stage fright. In the second season, he is not reasonable anymore, he takes chances and finally finds himself in a better place emotionally. A multi-layered character portrayed well by Anshuman.

Vishnu Kaushal as Avinash, is still a hyper boy struggling with his broken relationship, but slowly works through his tears to discover life beyond that. He might be a bad boyfriend, but he is a good human being and an awesome friend to have. Avi expresses his vulnerable side as he deals with the emotional upheaval that he feels with his best friend and ex's relationship, and finally he makes peace with it - this transition is well captured by Vishnu.

Mihir Ahuja who plays Akhil Gandhi in the series, is dealing with his injury and questions his mere existence in the whole grand scheme of life. He is a sweet and sensible boy, who slowly finds courage to address his failure and his own inability to be someone he envisions. This season further explores Akhil's mental health journey filled with confrontations, heartbreak and self-discovery. Mihir Ahuja, with no doubt, has beautifully portrayed Gandhi's growth from a sulking boy who turns mature by the end of the season.

As for the actresses, Himika Bose along with Inayat Sood have more screen-space this time around, and they do their job with finesse. Inayat's character Mahima is stuck in the ultimate love triangle in season 2. The show will explore her dynamics with Lakshay in her new relationship. Himika's character Dhriti is still the 'bindaas ladki', who creates an aura with her presence in college. Her relationship with Sameer is tested - whether they end up together is a yet mystery.

Each episode offers something real and tangible to think about. The story arc is all about finding one's place and space, while living with different personalities. The show captures multiple emotions, relationships and has the necessary drama a show must have - it's a complete entertainer. 'Feels Like Home Season 2' takes home an important point - if your intentions are good, there is nothing in life that isn't achievable.

Title: 'Feels Like Home 2' is bigger, better and mature as it promises hearty entertainment