This was announced by Paul after Gaddar called on him and joined the PSP on Wednesday.

The balladeer said that he would be contesting the by-election to save the Constitution. He said he decided to join hands with Paul as he was working for global peace. 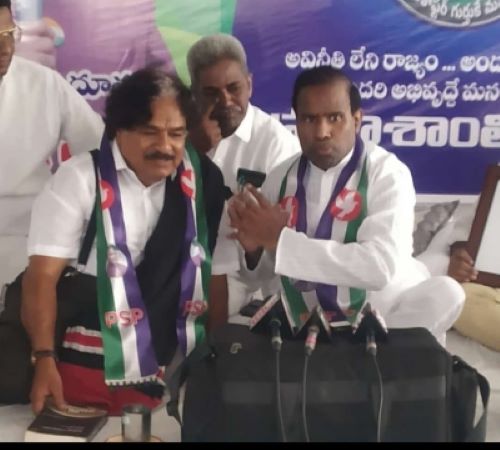 Gaddar said he would start campaigning among voters from Thursday.

The by-election is scheduled to be held on November 3. The last date for filing of nominations is October 14.

The seat fell vacant with the resignation of Komatireddy Rajagopal Reddy, who also quit Congress and joined the BJP.

The constituency is likely to witness a triangular contest among the TRS, the BJP, and the Congress. Gaddar's entry is likely to spice up the contest.

This is the first time that Gaddar will be contesting an election.

Gaddar, who severed his ties with the Maoists in 2017, enrolled himself as a voter the same year and for the first time in his life, cast his vote in 2018.

His decision to join Paul's party came as a surprise for many as it was speculated that he will join the Congress ahead of the next year's Assembly elections.

Last month, Congress Legislature Party (CLP) leader Bhatti Vikramarka had requested him to join the party and play an active role in politics.

The CLP leader had also requested Gaddar to join Rahul Gandhi's 'Bharat Jodo Yatra'. The revolutionary poet assured him that he would join the yatra once it entered Telangana.

Gaddar's son G.V. Surya Kiran had joined Congress in 2018. Gaddar too campaigned for Congress in a few constituencies but he did not contest the elections.

Gummadi Vittal Rao, popularly known as Gaddar, was a revolutionary singer and a sympathiser of Maoism, right from his days at the Osmania University Engineering College during the Telangana agitation in 1969-70s.

The group later became the cultural wing of the CPI-ML People's War, which merged with Maoist Communist Centre in 2004 to form the CPI-Maoist.

Gaddar had escaped an assassination bid in 1997. Unidentified men had shot him at his residence on the outskirts of Hyderabad. He had blamed police and then Telugu Desam Party (TDP) for the assassination attempt.

In the first-ever direct talks between then Andhra Pradesh government and People's War in 2004, Gaddar along with revolutionary writers and poets Varavara Rao and Kalyan Rao had acted as emissaries for the Maoists.

During his stint with the Maoist party, Gaddar strongly campaigned against electoral politics and called for a boycott of elections.

In 2017, he gave up Maoism and declared himself an Ambedkarite.