The police have laid their hands on the poster that was used to attack youths towards the organization and instigating them to carry out terror activities. 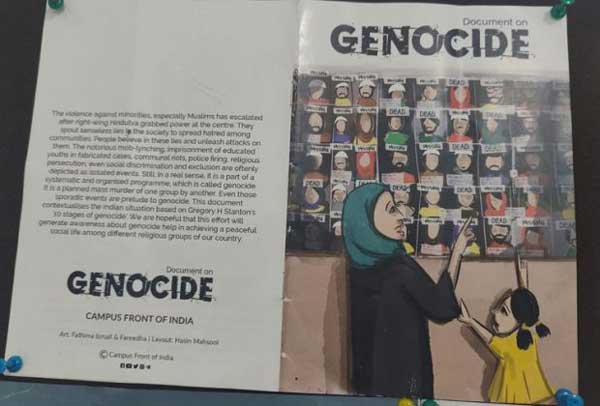 Many vital documents were recovered by the state police, when they raided the house of PFI offices and the houses of their leaders. They had prepared a poster named ‘Genocide’.

In the poster it is highlighted that genocide like acts are conducted on the Muslim community in India in recent years. After the right wing Hindu organization has held power in Delhi, attacks on minorities, especially Muslims has increased day by day. They are spreading lies to create rift between communities. The police fire bullets on the Muslim community whenever there is some communal unrest. Innocents are sent to prison. This is a systematically hatched plan. This is genocide.

In another part of the poster, a woman is showing her daughter, the photographs of people belonging to Muslim community who are killed, missed or sent to prison.

Police sources say that through these posters, young Muslims were brainwashed to join PFI and CFI. In another breakthrough, it has come to light during investigation that leader of PFI were giving verbal training to their youths to kill Hindus. In addition, arms training was given in the forests of Wayanad, Kannur in Kerala and Satyamangalam in Tamil Nadu.