Bantwal, Oct 3: A youth has donned the costume of a ghost during Navaratri festival with the noble thought of helping sick children and helping financially poor young girls to get married.

Devadas Naik, a resident of Neerolpe in Sarapadi village is the good Samaritan, who had decided to help the poorer sections of society. 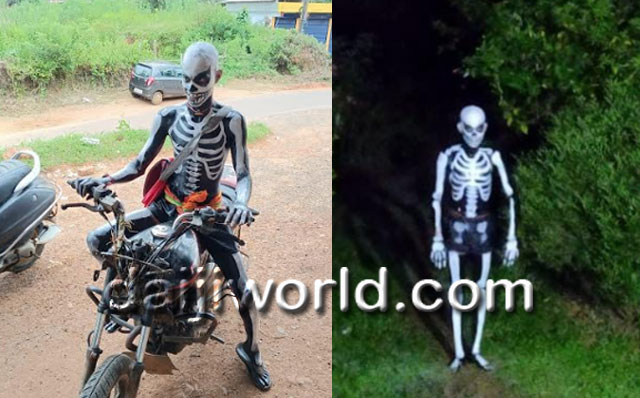 In the past too Devadas had donned costumes and helped poor people. However, due to the corona pandemic he could not don the costume for the last two years. In the past he used to wear the costume for one or two days. But this year he decided to keep it on for a week and collect more money.

Devadas started going around in a ghost costume on September 29 and he will do this till October 5. He has set a target of collecting Rs 20000 to distribute it equally among two poor families. He wants to provide financial help to two children of the same family, who are suffering from Kidney-related ailments. They are neighbours of Devadas.

In addition, he wants to help a girl from the nearby village to get married as they are financially poor.

Devadas has garnered got good response from the public. He says that public has made the costume and made it go viral on the social media and thus helped him to collect more money.