Dubai, Oct 2 (IANS): I2U2 is the newest alliance to be formed on the world stage, a 4-country alliance that is going to give a new direction to the world in business, economic, peace, and energy development. I -- India, Israel, U -- United Arab Emirates, US.

This alliance was formed just a few months back and the first meeting of I2U2 was held in July 2022. But in just 3 months, this organisation has started giving shape to its vision. 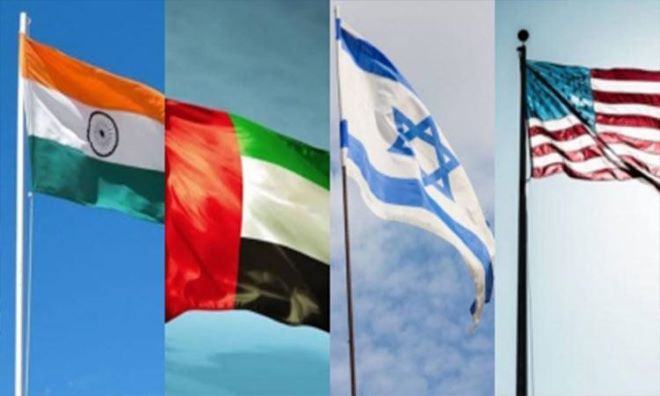 During his visit to the Middle East in early July, US President Joe Biden attended the first leaders' summit of a new group made up of Israel, India, the United Arab Emirates, and the US, and the first on July 14.

As a result of the group's inaugural summit, which was attended by Indian Prime Minister Narendra Modi, US President Joe Biden, Israeli Prime Minister Yair Lapid, and UAE President HH Mohamed bin Zayed Al Nahyan, the leaders announced that UAE will invest $2 billion "to develop a series of integrated food parks across India", while the I2U2 group agreed to go ahead with "a hybrid renewable energy project in the Indian state of Gujarat".

The main collaborations of I2U2 are focused on economic development and trade synergies, as opposed to alliances based on defence.

According to the Indian Ministry of External Affairs, I2U2 aims to encourage joint investments in six mutually identified sectors such as water, energy, transport, space, health, and food security.

It intends to mobilise private sector capital and expertise to help modernize infrastructure, drive low-carbon growth for our industries, improve public health, and fuel the development of critical emerging and green technologies.

The I2U2 framework will focus on potential joint projects as well as other common areas of mutual interest to strengthen economic partnerships in trade and investment in our respective regions and beyond.

These projects can serve as a model for economic cooperation and provide opportunities for our businessmen and workers.

I2U2 is a coalition that intends to raise capital and expertise from governments as well as the private sector to modernize infrastructure, create joint financing opportunities and link new start-ups to I2U2 investments, and key emerging and green technologies. While promoting the development of agriculture and ensuring long-term food and energy security.

While the White House issued a statement regarding I2U2, it said: "We are looking forward to the progress of economic cooperation in the Middle East and South Asia, and especially from these historic developments, including the promotion of sustainable investment among I2U2 partners.

I2U2 participating countries and their trading partners have immense potential to contribute to global competitiveness, said Prof. Faisal Ahmed of the FORE School of Management, Delhi.

The focus has to be on mutual geo-economic benefits and increasing the participation of each country in the 'global value chain'.

Mobilization of private sector capital could be a matter of concern.

The availability of such funds can help in a smooth and well-planned flow of investments. It will also help establish I2U2 as a credible and predictable framework for infrastructure development and financing.

The initiative is considered a collaborative project for the Quad, a four-way partnership involving Australia, India, Japan, and the United States that was established partly in response to growing Chinese influence in the Pacific.

I2U2 strengthens the efforts of the United States and India to control China's influence in Asia and Africa and establish better relations between its allies in different parts of the world.

The I2U2 group, like other recently announced groups, mostly reflects the institutionalization of the economic alliance that took place amid the global realization brought on by the pandemic. Considering the trade relations between the member states, based on the 2021 IMF data, the trade between the four countries is about $400 billion.

There are already thriving trade corridors between the United Arab Emirates and India as well as the US and Israel.

India tops the list as the largest trader along with the other three countries with $188 billion.

The United States comes in second place with a trade of about $167 billion with other states, which has a lot of room for growth considering the US's nearly $5 trillion trade profile.

For India, the target is primarily economic. Delhi took the initiative to strengthen trade ties with the emirate after the sealing of a major economic deal in March, and accelerated talks for a trade deal with Israel.

About 3.5 million Indians live in the emirate, which is about a third of the total population of the Gulf country, making them an important source of labor for the UAE. India also receives significant amounts of oil from the emirate and weapons from Israel.

The I2U2 alliance is still gaining momentum and is focusing only on trade, fertilizer security, and new energy.

Bringing together like-minded international and regional powers within a geo-economic framework to find solutions to problems of human security, US leadership, Israeli innovation, the UAE's financial clout and the Indian market and their collective entrepreneurial spirit has been focused on.

It is an alliance that is more geo-economic, and less geo-political, but if the extension of I2U2 is to be expected, then Egypt and Saudi Arabia are the two states in West Asia that have the ability to convert I2U2 from a geo-economic group to a real one.

The regional security architecture has both diplomatic and military potential to change. Despite the challenges, I2U2 is a promising initiative with immense potential for cross-regional collaboration, and if successful, could prove to be a template for future collaborations.