Mumbai, Sept. 29: The oath taking ceremony is one of the momentous occasions of the college where the newly selected members of the core committee are officially vested with their powers and positions. On September 23, members of the Students’ Council were inducted as office bearers to take up the responsibilities as student leaders. The program began with lighting of the lamp and classical dance. 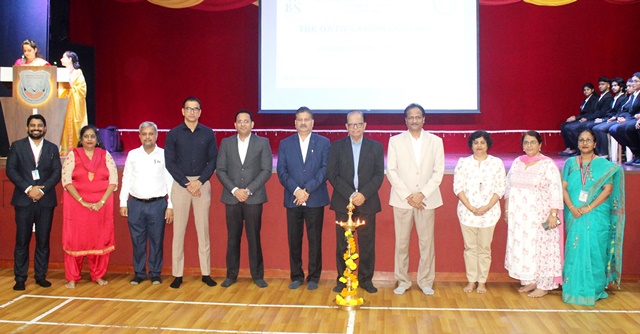 General secretary Atharva Shetty, along with his team of office bearers, took oath to hold the college motto and ethos in high esteem. The Students’ Council members, under the leadership of the general secretary, took the oath to abide by their duties with integrity, faith and excellence.

The general secretary, in his speech, thanked everyone for giving him the opportunity to develop leadership skills and personality and ensured that the team as one will take the college to its zenith.

Principal Dr Sridhara Shetty congratulated all the office bearers and expressed his desire that the newly inducted council will be the role model for the students and threw light on various types of leadership. He guided the young leaders to be true to the institution and work with complete fidelity.

Chairman, PEC, B R Shetty congratulated the newly elected office bearers and inspired the members and encouraged them to excel in their future endeavours and said that they should be exemplary in their work. Vice-principal Dr Liji Santosh, proposed a vote of thanks and whole-heartedly thanked everyone for gracing the occasion and concluded the oath-taking ceremony.