Mumbai, Sep 27 (IANS): In a thriller for scientists and ornithologists, a migratory bird tagged with a GPS device in Mumbai was traced all the way to Siberia, the Bombay Natural History Society said here on Monday.

Terming it an "Eureka moment", the BNHS said that the black-tailed godwit, named Bala, after a renowned expert on bird migration Dr. S. Balachandran had taken wings from Mumbai in March.

It was tagged with a GPS device in Mumbai that month and finally it was traced to a location in southwestern Siberia in June, covering a distance of around 5,000 km across countries. 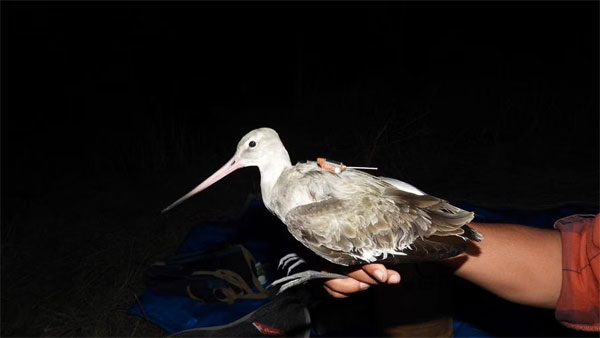 It again took flight and returned to Mumbai in just five days, this time covering 4,200 km, and is now resident at the Bhandup Pumping Station in the eastern suburbs.

The BNHS said that Bala's return proved the birds' typical habit of "site fidelity", ot a return to the same site that they are accustomed to.

It is now studying and analysing the entire flight pattern of Bala and will publish it in a report form soon, said Deputy Director, Dr. Rahul Khot.

BNHS' Dr Balachandran is a reputed scientist with over four decades of study and research at various destinations like Chilka in Odisha and Bharatpur in Rajasthan.

Prior to this, the BNHS has deployed six GPS/GSM tags on three greater flamingos and three lesser flamingos from January to April 2022 to understand the flamingo migration, and all the pink birds have landed in Gujarat.

These experiments are part of the BNHS' study on long-term ecological monitoring of migratory birds visiting the Thane Creek since 2017.

In order to better understand the wintering birds' habitat use, migration patterns and other aspects, the scientists deploy bird rings and colour flags at sites around Thane Creek.

So far, the BNHS has ringed or flagged around 21,000 birds and has been able to trace and track them within India or foreign countries.

Title: Bird tagged in Mumbai returns home after a long flight to Siberia