Udupi, Sep 24: “The Congress encouraged PFI activities during their rule. We lost 18 workers as a result of Congress nurturing the PFI,” said minister Sunil Kumar.

Responding to the issue of NIA raid on SDPI and PFI offices, he said, “I told when Praveen Nettaru was murdered that I will take this matter to a logical conclusion. We are ready to provide justice to our workers at all phases. Accordingly, the investigation was handed over to NIA. Now NIA is doing the investigation at a high level. 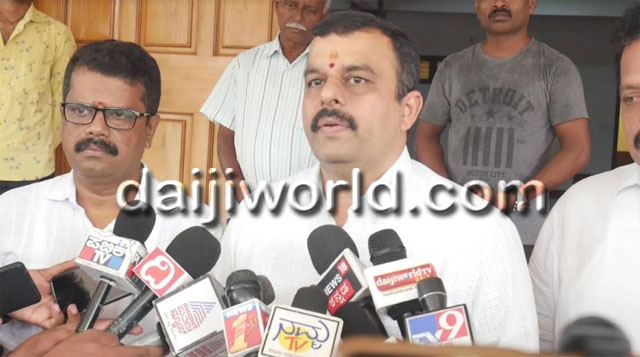 “As the Congress supported SDPI and PFI and withdrew the cases filed on them, a situation of unrest prevailed in the state. This was a huge challenge for the internal security of the country. Our stand was very clear. We wanted to find out the national and international connection of these organizations through NIA and safeguard the interests of India.

“We will take all steps to keep PFI at bay. During investigation it has come to light that the accused wanted to make India an Islamic country. No country of this world can turn Indian into a Muslim nation. Indian is a Hindu nation. We will make it strong on this base,” he said.

Reacting to ‘PayCM’ row, he said, “The Congress’ allegations are baseless. PayCM is a bundle of lies. DKS, who pasted the posters has gone to the ED. Siddaramaiah should answer this. What moral right Congress has to paste the posters? Congress gobbled funds in Arcavati, Indira Canteen and bed schemes. Siddaramaiah is the father of corruption. Congress members, who reached the pinnacle of corruption, speak about our common CM. If scam has taken place, let them raise the complaint with Lokayukta. During the 10-day session of assembly, not a single day was allotted for corruption.”

Replying to a query on electricity tariff hike, Sunil said, “Once in a year, the electricity fare is hiked. The rate is fixed based on the rise of coal prices. From the past nine years, the unit rate of electricity is increasing every three months. So this hike is done to adjust the rise in coal price.”