Mangaluru, Sep 22: Ismail Kannathur (50) is the finest epitome in the society who has proven that being not educated is not a curse, but there is a scope to share knowledge.

Ismail, a scrap dealer by profession, has a collection of over 2,000 books at his residence. He runs a scrap shop at Hoovakuvakallu in Balepuni village in Bantwal. Ismail is not well-educated and studied only up to the first standard. But, he knows the importance of education and knowledge. Knowing the importance of books, Ismail has built a small library at his residence. He has been in the scrap dealing business for 25 years. When he gets good books in his business, he collects and preserves them. Initially, Ismail was a fruit vendor, but due to his helping nature, his business incurred loss. Later, he turned into a scrap dealer as per the suggestion of one of his friends. In the beginning, though he had no experience in scrap dealing, later through hard work, he gained experience. 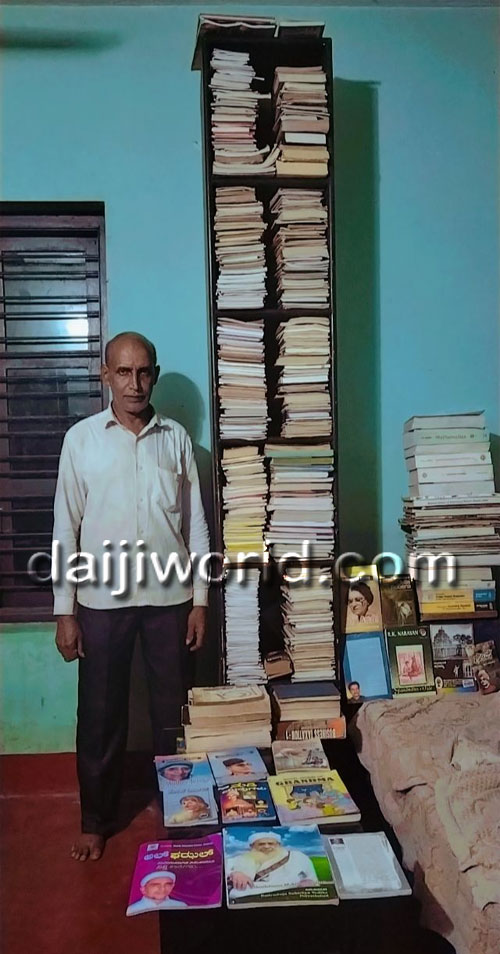 Ismail is an active social worker. He has helped several people in distress. Whenever an accident occurs in the vicinity, Ismail has rushed several victims to the hospital. Moreover, he has helped poor girls in their marriage by raising funds.

Speaking to daijiworld.com, Ismail said, "I have collected several good books. My intention is to set up this library. I am not educated, but let others be educated by reading books. In the past, I have given over 2,000 books to several people. Some take it by paying a small amount, and though I refuse, they thrust a few currency notes into my shirt pocket. But, many take books free of cost. Some teachers and students also take books from me. As I am not well-educated, I have educated my five children.”

He also said that a person had motivated him to set up a library with the books available.

Ismail has arranged books on wooden shelves at his residence. The public can borrow them.

Ismail is also known as 'Gandhi' for his social service. He has been felicitated by many organizations and institutions for his active cleanliness drive. Ismail, for several years, has been involved in the cleanliness drive in the locality. He has helped several poor and downtrodden people. Ismail also actively works for various social causes including helping the police department in tracing thieves who rob offering boxes of temples and masjids.