Ballari girl, who moonlights as a puncture shop repairer, tops in state in PU Arts

By Kumuda H
From StoryInfinity

Ballari, Apr 17: The mobile phone of Devendrappa, who runs a roadside puncture repair shop at Kottur in Ballari district, has not stopped ringing since Monday. No, it is not the customers who are seeking him, but it is his daughter who has been flooded with congratulatory messages on his phone, for topping the state in Arts section in the recently held II PU exam.

Kusuma Ujjani has secured 594 out of 600 in the Arts Section with centum in three subjects – Political Science, Optional Kannada and History. While she has secured 96 in Kannada language, she has got 99 each in Education and Sanskrit.

A student of Indu Independent PU College in Kottur, Kusuma’s achievement is no less inspirational. 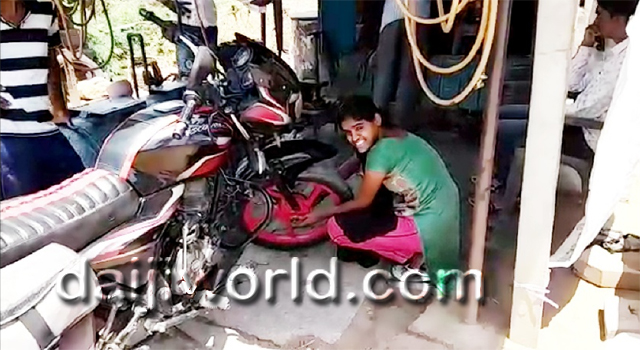 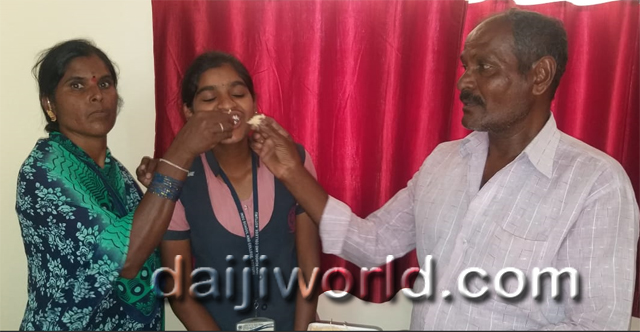 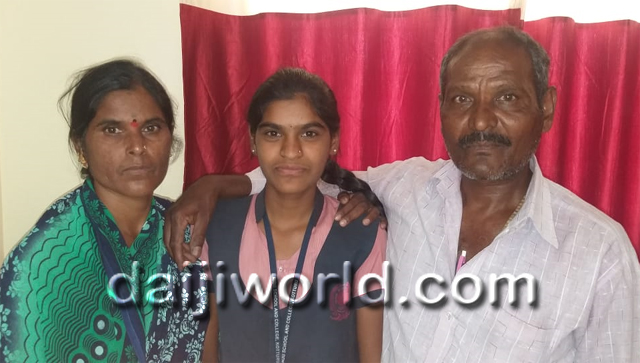 Her father Devendrappa has studied up to 7th standard while her mother is an illiterate. “But, along with other siblings, I have been fortunate enough to be supported by our parents to pursue studies,” says Kusuma. While Devendrappa ekes out a living by fixing flat tyres, his wife works as an agricultural labourer to support their four children.

The couple has beaten the odds to ensure that their children are well educated. Kusuma’s older sister holds M.Com and B Ed and another sister is studying B Sc. Her older brother has dropped out after SSLC and now helps their father in the shop.

Kusuma has been a bright student throughout. She had secured 92 per cent in SSLC exam.

“I wanted to pursue Science considering my good score in Class X. But due to financial constraints, I had to bury my dream and pursue, Arts. Nevertheless, I enjoyed studying Arts and Political Science is my favourite,” reveals Kusuma.

Kusuma said that her parents never egged on her to study hard. “They never pressurised me or my sisters. However, I made it a point to revise the chapters regularly and dedicate a time – whenever I can – for studies,” says Kusuma. For, during her spare time, Kusuma helps her dad in his shop.

In fact, her college, Indu Independent PU College has been topping the Arts Scene in II PU exam since 2015. The college holds preparatory exams – at least 10 – to ensure wards are better equipped to face the final exam. Result: The college has bagged all the top five positions in the State in the Arts stream.

“We have a great faculty who treat us like their own children. We are coached throughout the year, never compromising on the quality of time,” says Kusuma. This year, there were 850 students in her batch and the fact that the batch has secured 100 per cent result, speaks volumes of the teachers’ endeavour.

Now that she has topped the state, Kusuma wants to take up civil services exam. But she wants to take up a job now and help her family. “Despite my sisters having a good degree, they do not have government jobs, yet. Sometimes, I feel dejected. But my parents’ struggle motivates me to have higher goals,” says Kusuma.

The youngest of four siblings, Kusuma is not just a bookworm. She loves singing and dancing, which she has not been able to pursue, so far, rues Kusuma. But she is a great cook, though. “I can dish out jowar rotis and holige any time,” says this young girl.

Title: Ballari girl, who moonlights as a puncture shop repairer, tops in state in PU Arts