Mangaluru, Aug 10: In a boost to Tulu language and literature, and in keeping with changing technology, Tulu Wikipedia has gone live, thus becoming the 23rd Indian language in which Wikipedia is available.

The news was announced by two key community organisers on August 6 who helped to make an eight-year-dream come true. Dr Vishwanath Badikana, a PhD in Kannada literature in Mangaluru (Karnataka) and Bharathesha Alasandemajalu, a mechanical engineer based in Muscat, from Puttur Dakshina kannada announced this while attending Wikiconference India 2016, India’s second national Wikipedia meet in half a decade being held here this weekend. 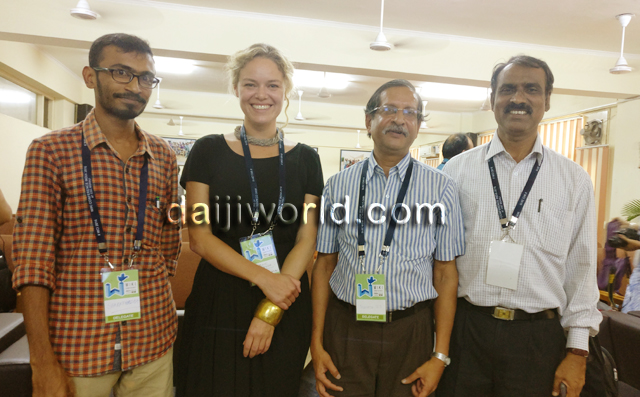 Tulu is a language spoken by around two million native speakers mainly in southwest Karnataka and in Kasaragod district, Kerala. It belongs to the Dravidian family of languages. Some scholars suggest Tulu is among the earliest Dravidian languages with its roots going back some 2000 years.

Located at tcy.wikipedia.org, the Tulu Wikipedia has been in “incubation” since 2008. This term is used to describe such online collaborately-crafted encyclopedias which are still waiting to to go “live” or active and come online.

Around 2014, it was reactivated. Following some meetings and workshops, the concept was also showcased that year at a “World Tulu Conference” stall in December of that year.

After much work, some 1,100 articles (or 1,050 if one could ignore those which are not redirects) went live. There are currently about 100 editors who have made over 10 edits each.

“Dr Vishwanath and Bharatheshaa are the number one and number two contributors,” said Dr U B Panavaja, a former scientist and techie and long-term supporter of Kannada computing. Pavanaja currently looks after the CMR (Creating Movement Resources) of the Bengaluru-based Centre for Internet and Society which works with some language groups to promote their Wikipedia presence.

“After we became live, we will import articles from the ‘incubator’ site, build the ‘village pump’, set up policies, administration structure, info boxes and templates,” said Pavanaja, describing the tools that any new Wikipedia needs to set up.

Scholars like the nineteenth missionary-linguist Bishop Robert Caldwell have called this language “peculiar and very interesting”. According to him, “Tulu is one of the most highly developed languages of the Dravidian family. It looks as if it had been cultivated for its own sake.”

The language has a lot of written literature and a rich oral literature such as the Epic of Siri, according to the Wikipedia itself.

In coastal Karnataka, both the Mangaluru and Udupi areas today allow the language as an optional third-language in local schools.

This role in schooling makes it all the more mandatory to create encyclopaedic texts in the language, say its Wikipedia promoters. Mangaluru University also has a Tulu language chair while St Aloysius’s Radio Sarang community radio station broadcasts daily in this tiny language and the local All India Radio also broadcasts in the language.

Speaking to daijiworld, Dr Vishwanath Badikana said, "Dr U B Panavaja motivated us to work on this project. In May 2014, we had two meetings in Karnataka Theological College with Prof Vivek Rai, A V Navuda and Vaman Nandavara, and held two workshops along with Tulu Academy.

"Dr Kishore Kumar Rai, Lokesh, Yashodha Mohan, Vasanth S N from Ujire and Bennett Ammanna also helped us. From 2008 to 2014 there was the process to start the live and in 2014 we got the permission. To make it live, there should be active members in the team to edit articles and this should be done on a regular basis. My request to start Wikipedia Tulu was accepted in 2014 on the recommedation of Purushotham Bilimale to Wikipedia.

"Last Thursday we went live and August 6, executive member from Wikipedia Catherine announced the same at the Wikiconference in Chandigarh," he added.

Currently, the live active members include Dr U B Panavaja, Bharathesha, Benette Ammmanna, Dr Kishore Kumar, Lokesh, Yashodha Mohan and some students. Presently there are 8 tutorials on Wikipedia Tulu on how to operate the page. "It is a source for Tulu people to access information and knowledge. We have 1,100 articles at present in Tulu. People can also upload information and photos but it should be genuine and their own or with acknowledged copyright," Dr Badikana said.

"Every language has its own uniqueness. In Tulu culture there is Bhootaradhane, Nagaradhane etc. With Wikipedia Tulu, more people will come to know about its richness and it will give easy access to Tulu language too. There is no payment involved here - it is a service for Tulu language and culture. There are many literary works in Tulu and with the permission of the authors and publishers, we will try to bring those books to Wiki. We have also started the process of bringing the language in unicode and two meetings have already been held. We have to apply for this through the Tulu Sahitya Academy and clearance will have to be got from the US. It is a long process.

Speaking to daijiworld, Bharathesha Alasandemajalu said, "Anyone can write or edit articles on Wikipedia Tulu but it should not be plagiarised. The photos should be one's own or uploaded with valid permission from the owner. This will help the future generation to know more about the language and act as a source of information on Tulu language and culture."