Khaled Al Shaeri was flown from his home in the Southern Jazan province to King Fahd Medical City in the capital Riyadh in August 2013 for treatment after his condition worsened due to a steady rise in his weight, which reached nearly 610 kg at that time.

Sada newspaper quoted doctors as saying Shaeri has shed 490 kg to reach 120 kg following a medical programme that started a few days after he was admitted.

“Khaled is in a good condition now after reach 120 kg and he can move much better…he will return to his home and practice a normal life soon,” the paper said, quoting Dr Ahmed Hikmi, who heads a medical team treating Shaeri.

Civil defence and health teams used a special crane and medical bed imported from the United States to move Shaeri to hospital on orders by late King Abdullah. 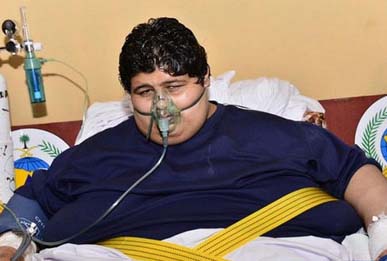