It was not the best day. The morning was filled with household mishaps and bickering. His wife’s constant remarks about his evening drinks had put him off. They were a family of five. All three children were attending private school. Cost of education was high. His wife believed his drinking habit was messing up their family budget. On the contrary, he thought enrolling children in private institutions was a mistake. He knew if they were studying in government school the cost would be less. Being a self-employed auto rickshaw driver in Bangalore, he worked hard to make ends meet. To make the situation worse his insurance agent called. The insurance cover on his Auto Rickshaw had expired 3 days back. He was short of money to pay both insurance premium and school fees.

He felt miserable as he stepped out from his home. The engine of the 3-wheeler was turned on while waiting for his children to join. His morning routine involved dropping off kids at school. A woman was his first customer of the day. She travelled in his auto from Begur to Koramangala. A senior citizen with a grey beard was his next customer. He carried a non-woven bag in his right hand. The customer advised the driver to leave him at Oasis apartments in Jayanagar 04 block. 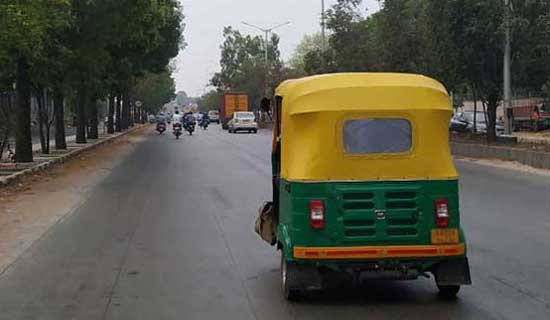 The Auto gathered speed as he drove towards Jayanagar.

“Why are you driving so fast?” Senior citizen with the grey beard sounded grumpy. “Who gave you the license? Slow down, I am feeling woozy.”

The driver reduced the speed. He did not reply.

“Could you please switch off the music? Too loud, it’s making me crazy.” Customer ordered impatiently.

The driver had his reservations. Music motivated him while driving. He showed restraint and turned off the music. They reached Jayanagar 04 block in twenty minutes. Before the driver could take the U-turn to reach Oasis apartments, a young man waved his hand. The driver pulled up.

“Where do you want to go?” Driver asked his new customer.

“Get in. Hey Uncle, allow him to sit inside.” Driver instructed the senior citizen.

“How could you accept a new customer without dropping me off at my destination?” The man with the grey beard was visibly upset.

“Fine, you reached your destination. Oasis apartment is on the other side. You may please get down and cross the road. I cannot waste my time by taking a U-turn.” Driver said bluntly.

“I won’t get down here.” Aged man tried to be stubborn. “You will have to take me to my address.”

By now, they were quickly surrounded by curious bystanders. People had crowded around to witness the altercation between auto driver and passenger. On the opposite side of the road, a security employee from Oasis apartments heard the noise and stepped out from his cabin.

“Do you want me to pull you out and crash the auto into your body? Hey old duffer, just pay and get lost.” Driver lost his temper and yelled.

Intimated by the driver’s threat, the senior citizen grumbled while stepping out and paid the tariff.

“You have made a mistake by insulting and humiliating me.” The man with the grey beard panted for breath. “I am cursing you. Before today’s sunset, you will get into great trouble. Remember my words.”

He left the scene after giving a stern look. While crossing the road he lost his footing. Then recovered and plodded on his way to Oasis apartments.

“Why did you fight? You should have left him at his address. I would have taken some other auto.” Young passenger felt awkward.

“Eccentric oldman. Don’t worry about him.” Driver was irritated. “He complained about my driving. He made me switch off the music. Such a pain.”

“Be careful. It is not good to be cursed by an elderly person. It could bring bad luck and affect your life.” New customer cautioned him.

“Curse and bad luck? I do not believe in such superstition.” Driver clenched his jaw.

He left him at Bannerghatta. A new customer engaged his auto for a drop to JP Nagar. During the work, he tried to forget his dispute with the senior citizen. It was not easy. The curse haunted his mind constantly. This was not the first time. He had clashed with his customers in the past as well. However, he did not remember anyone cursing him so intensely.

He was cursed by an elderly person!

Abruptly he applied brakes at the left turn. A motorcycle almost hit his auto. He did not see him coming and nearly got into a crash. Driver was shaken up. An unknown fear captured his imagination. Was something happening triggered by the curse of the senior citizen? Suddenly the sun disappeared, and the atmosphere turned gloomy. Dark clouds appeared in the sky followed by wind gusts. Feeling insecure, he decided to go home for lunch.

At the next signal, he felt a sudden jolt. His quick thinking helped to avert a major accident. If he had not turned to the right, a speeding bus would have crushed his auto. The incident terrified him. Driver was deeply shocked. He regretted not renewing the vehicle insurance.

Driver remembered the curse of the elderly passenger. As soon as he got home, he handed over all his earnings to his wife.

“Is something wrong? You look depressed.” His wife asked.

The driver narrated his altercation with an aged man including the curse and two accidents, which he narrowly escaped.

“Why did you humiliate an elderly person?” She accused him. “You must have hurt or slighted his feelings. If he has cursed with intense pain, it could bring harm. Do not just worry about your Auto Rickshaw, we all are vulnerable. Our house might collapse. We may lose our loved ones. Serious damage might happen to you and your family.”

He rubbed his forehead and looked down.

“I suggest you try to find this passenger and ask for his forgiveness. We will be saved.” She pleaded.

It had begun to drizzle lightly as he walked out of his house after lunch. As part of daily schedule, he picked up his children from school and dropped them off at home. Thereafter he drove towards Jayanagar. By the time he reached Oasis Apartments, it started pouring. Few auto rickshaws were waiting in line outside the gate. He parked his auto under a tree away from the line. Driver walked inside the security office and described the physical appearance of the bearded senior citizen. As anticipated, he did not get permission to enter the building. He knew it was going to be hard. The security person, who had witnessed the altercation in the morning, identified the driver. He threatened to alert the cops if the driver was seen again in the vicinity.

The tree above his parked auto waved its branches when the wind blew. If the tree falls, it could cause significant damage to his vehicle. The curse of the aged man reverberated in his ears. He rushed towards his auto against the howling wind. A safer place was found to park the auto. Driver sat on his seat and kept an eye on Oasis apartments. He wanted mercy and hence anxiously waited for the aged man to show up.

By then it was 5 pm. Much to his disappointment, the aged man with the grey beard did not show up. Driver shook his head with a measure of frustration. Feeling tired, he went out to have a cup of tea. While sipping he thought perhaps, he was wasting his time. Was the senior citizen living in Oasis apartments? Driver had no evidence that supported his notion. He could be just a guest. Perhaps, the senior citizen had visited Oasis Apartments and left the place much before his arrival. Driver lost his hope.

Soon after taking his last sip, he dropped the cup in a public waste bin and parked his auto behind the waiting line. As the wind gusted, the rain became heavier. His auto was placed seventh in the queue. It took 10-12 minutes to reach the front spot. In less than 3 minutes, a passenger rushed inside with agonal breathing.

“I am in pain. Take me to the hospital.” The passenger pleaded.

“Which hospital?” Driver pulled the lever and looked back.

The senior citizen with the grey beard! He was the same passenger who had cursed him today morning after the quarrel. Driver could not believe his luck. The elderly person appeared as if sent by God. All this time the driver was desperately waiting to be pardoned. Passenger clutched his chest and seemed to be in excruciating pain. In this situation, asking forgiveness did not matter. Perhaps, God had given an opportunity to help the aged man in time of need. Driver thought so.

“There is a clinic further up at the right side on the same road.” Passenger whimpered.

“You appear a bit ill. Why is no one accompanying you?” Driver accelerated.

“I live alone. I have no one.” He slurred over the words.

Driver slammed on his brakes right in front of the clinic.

“Rain may not stop. You will be fully drenched before you reach the clinic.” Driver turned his head.

The aged man with the grey beard did not respond. That unnerved the driver. Ignoring the wind and rain, he jumped out.

“Uncle we reached the clinic. Do not worry. I will take you inside.” He caught hold of the senior citizen’s shoulders. Not attempting to support himself, the body fell on him. Was he unconscious or dead?

It frightened the hell out of him. Among all autos, the elderly man had chosen his auto to die! Same man had cursed him by saying he would get into great trouble before the sunset. The driver had threatened to pull him out and ram his auto into him. There were several witnesses. If one or more come forward to testify against him, what should his alibi be?

Standing in the rain with wet clothes and corpse in his arms, the driver realized he was in a great deal of trouble!