September 16, 2014
25th May 2014.
I have been waiting for my husband’s call with great excitement. Who am I? At this moment, my name is inconsequential. It is unimportant.  The importance lies in my tryst with destiny. Tomorrow will be a day to remember for all of us. Believe me, tomorrow my husband will take oath as country’s Prime Minister at Rashtrapati Bhavan.
Would I be invited to this momentous event?
I live in substandard and ill-furnished two-room house. Do you think I am crazy to address myself the wife of Country’s Prime Minister?  I am not looking for any unmerited name and fame. This is the truth. I am Prime Ministerial candidate’s wife. Tomorrow onwards you too will join in chorus of approval and will address me as ‘Prime Minister’s wife.’
I do not own this shabby place. I have been living with my brother’s family for so many years. The dependency on my brother, his wife and their children is unquestionable. My brother runs a grocery shop that is attached to residence. A door from shop leads to entrance of our house. It opens out to our living room. The worn out table is best what we have. A variety of grocery items are stored disorderly in living room. Next room is our kitchen cum bedroom. We have to manage our living with best available options. A small TV set is positioned over a tin trunk at the corner.
Do I live in pitiful and miserable condition? How could ‘would-be’ Prime Minister’s wife is so inadequately placed? Prime Minister travels in posh cars, luxurious aircrafts and classy helicopters. Assistants, helpers and security guards escort him at every step. He is known for sartorial dress sense and healthy dietary habits. Is it a national shame? Prime Minister’s wife has no house of her own. If not for my brother’s shelter, I would have been in greater crisis.
Does it sound pathetic and unpleasant? 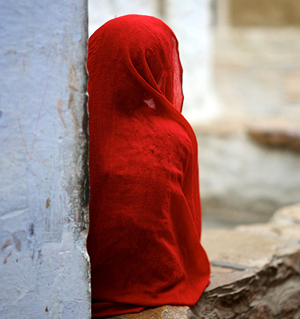 Disclaimer: Though this story is inspired by news reports, the narration, dialogues & expression appearing in this story is work of fiction. Any resemblance to real, living, dead is purely coincidental. Most important, any similarity to those living/nonliving with dead conscience is entirely accidental & unintentional.