“You seem excited and eagerly waiting. Who’s that?” Natasha asked him.

“It’s Wimbledon final. We have a guest. Brigadier Mark will join us.” John replied while glancing at wall clock.

“I cannot believe. So much of enthusiasm to meet the retired Brigadier. You think Wimbledon final will not happen if he doesn’t visit us.” She sounded sarcastic. 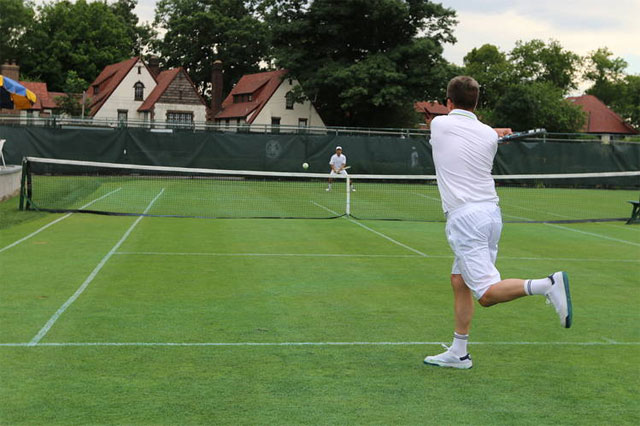 “Are you jealous?” He winked and smiled. “He bought opposite house and he has been a good neighbor for us for last couple of years. He has lost his spouse and has been living alone. Only son is in US. Poor fellow, living a lonely life. He likes our company.”

“Say, you are enjoying his presence. I do not.” Natasha corrected him. “I am tired of hearing his exaggerated army stories.”

“He is typical army guy.” John justified. “I agree he has the tendency to dramatize things. They talk that way. I love it. He is lively and so wonderful. You have not seen him while playing tennis. He is above sixty. However, runs and covers the court like thirty year old. Supremely energetic.”

They played tennis at club every weekend. It was fun watching grand slam matches live with Brigadier Mark. His presence would make the mood buoyant. Evening sessions while watching French open and Wimbledon always ended with drinks and food. Their conversation was centered on finer points of the game. They discussed about their respective professions as well. John always insisted Mark to have food before leaving.

“It gets a bit too much.” Natasha grumbled. “Sticks like glue, don’t you think he visits too often? His loud voice drives me insane. Irritating. I am tired. He is pompous, pretends he knows everything. Sounds fake.”

“It’s unfair opinion.” John objected. “It’s not just about tennis. His technical understanding of sports in general is excellent. He is sharp witted. He has extensive knowledge about this world and life. It helps us to understand others and ourselves. I enjoy his company. Tell me truth, what’s your problem with Brigadier Mark?”

“He is red-headed.” Natasha repulsively admitted. “I don’t like his red hair. It is sickening.”

“Come on, that’s silly.” He tried to make her understand. “How can you judge a person on the basis of hair color? Red hair is commonly found in British Isles. Brigadier’s father had married a Scottish woman. Its genetic factor. She had red hair. He has inherited the hair texture and color from his mother. I do not think if he is using any artificial hair color.”

“Yak…” She adamantly replied. ”I find it disgusting.”

“Got it. I will advise Brigadier Mark to change his hair color.” John smiled.

They had been married for last twelve years. Both were successful TV actors when they had tied knot. John had been a big name in television serials with ardent fan following. Natasha was popular when she quit acting about ten years back. She wanted to raise kids by becoming stay-at-home Mom. However, the pregnancy did not happen. She had failed to conceive even after consulting fertility specialists. A desire that remained unfulfilled for both Natasha and John.

Brigadier Mark appeared in white attire when Wimbledon final was about start. Natasha vacated living room and allowed them to enjoy the match.

“You look young and handsome in white clothing.” John gently patted his shoulder.

“I am just following the strictly-white rule of Wimbledon.” Mark said laughingly. “Is your wife joining us?”

“Natasha is inside. She likes Facebook and WhatsApp more than tennis.” John picked TV remote and increased volume.

Djokovic was playing against Kevin Anderson. Kevin Anderson repeatedly faltered in his serve. Serbian star relentlessly dominated. Djokovic sealed the title by strolling over his opponent.

“It was pretty one-sided affair. Match would have been more exciting if Djokovic was facing Nadal or Federer. There is lack of young talent coming through good enough to take on big guns.” Brigadier Mark took a deep breath.

John had opened a bottle of scotch while watching the game. Food was placed at dining table. They pulled the dining chair after consuming three pegs each. Natasha did not show up. Brigadier Mark recalled his role in Kargil war and provided an insight about intelligence failure that led to operation Vijay. He explained how Pakistani soldiers infiltrated to Indian side and how Indian soldiers recaptured positions in high-altitude warfare at mountainous terrain. Their dinner conversation topic shifted from field of war to field of acting. John narrated few humorous incidents from his acting career.

“What is acting?” Mark questioned.

“Acting is pretending to be someone else. Actors hide their true self while essaying a role. It is like wearing a mask every time they get into a new character. We make viewers to believe the masks we wear are authentic.” John explained.

“In this world, we are all are actors.” Brigadier Mark stared down at floor. “We all wear masks, and the time comes we cannot remove them without removing some of our own skin.”

“These are not my words.” Mark looked up. “I had read it somewhere.”

Brigadier Mark got up to say goodnight. John came out along with him and stopped at gate. Mark slowed down and looked back.

“I have a question.” Mark hesitantly mentioned.

“It is not true. She is bit moody. You may stop worrying about it.” John wished him goodnight and turned back.

“Are you not bored with the redhead?” She asked without looking at him.

“Please stop making fun.” John appeared serious. “He has already developed an inkling that you dislike his visits.”

“Who cares? I do not mind if you go to his place to watch matches. You may stay there whole night. Let me live in peace.” She said with a huskiness.

He stayed silent without knowing how to respond. John avoided unnecessary arguments after drinking. At bedtime, he preferred to sleep peacefully and wake up in the morning with a smile. Shooting was scheduled next day early morning. John thought Natasha would change with time.

There were times he had to travel out of city for shooting. John was an actor in demand. Despite busy schedule, he always had ensured to be at home by weekend. Natasha had no issues in managing home in John’s absence. One evening as he was returning from an outdoor shooting, Brigadier Mark appeared to be waiting at gate. He got down from car to greet Mark.

“Just returned after long walk.” Mark replied with a tired sigh. “Thought of checking if you were at home. No one responded to doorbell.”

“Natasha must be in washroom.” John gave an excuse. “Come home. Let us have some hot coffee.”

“It’s ok. Some other time.” Mark turned down the offer. “I remembered some work. Let us catch up at tennis club coming Saturday. Good night.”

“Sure. Good night.” His gaze followed Mark until he walked into his house.

It appeared as if Brigadier Mark was constantly and incessantly hurt the way Natasha treated him. Natasha’s behavior was based on personal prejudice and unwillingness to be reasonable. How could anyone make her understand?

John inserted the key, turned, twisted the handle and opened the door. Natasha’s eyes were glued to TV screen. He felt nettled from her intentional ignorance.

“I am watching ‘Stranger’, your suspense thriller. You are too good. Underplaying a role is such difficult job. You are doing it with great restraint. I love your acting.” She heaped praises on his performance.

“Thank you.” John looked at his wife. “Didn’t you hear the doorbell? Brigadier Mark waited and left confused. I could read his face. He was visibly upset. This is not done.”

“You are taking his side again.” Natasha objected. “Did the redhead complain?”

“Don’t judge the book by its cover. This is prejudiced attitude. It is wrong to hold preconceived notions about anyone. You could have offered him a cup of coffee. What do you lose by being nice to him?” John questioned.

“He is not worth my time. You should have come early to extend hospitality and listen to his fake stories.” She replied bluntly.

John chose to respond with silence. He avoided intense arguments that could lead to resentment and tension. Subsequent Saturday and Sunday, they played tennis at club. However, John neither got an opportunity to invite Mark home nor Mark showed any intention to visit their house.

Barely a month had passed after this incident. Natasha developed morning sickness. They visited Gynecologist. Doctor confirmed the pregnancy after routine checkup. John was overjoyed to hear the good news and forgot all other trivial issues. The desire to have an offspring was strong. Pregnancy had finally happened. They were on verge of turning their big dream into reality. A part time domestic helper was appointed to do cooking and cleaning. John made a conscious effort to keep Natasha happy. He returned early from shooting and skipped tennis sessions in order to spend more time with his wife.

John’s mother lived in a small town close to the city. He suggested Natasha that if he could make her stay with them until delivery. His wife disagreed. She had always believed that her mother in law was overbearing, controlling and manipulative. The idea was dropped. The following Sunday he received a call from Brigadier Mark.

“How are you? Hope all is well.” Mark showed concern.

“I am fine. I did not see you at tennis club. Just thought, I would check in on you.”

“Oh… Nothing to worry. I will have to give a break to tennis. I am taking care of Natasha.”

“What happened to her?”

“She is pregnant. I am becoming a father soon.”

“This is lovely news. Congratulations to both of you. When is the party?”

“After the arrival of newborn.” John laughingly replied.

John passed on Brigadier Mark’s wishes to his wife. As usual, she remained silent.

“Brigadier has not visited us for quite some time. Shall we invite him for dinner next Saturday?” He sought her permission. “You may take rest. I will take care of the guest. How requesting domestic helper to stay back. We can pay her for extra hours.”

“Do you miss the red-head?” Natasha taunted him.

John stayed calm and avoided being disturbed by unkind remarks. He cancelled his plan to invite Brigadier Mark. Subtle shifts in her moods was evident. He did not want his wife to be burdened by his impatience. He thought, perhaps there could be a change of heart after the delivery.

John was at home when Natasha developed labor pain. It was early in the morning. He shifted her to closest hospital. She delivered a baby boy at 4 am. John was overwhelmed by torrent of emotion. He burst into tears when doctor handed the newborn in to his waiting hands. The joy was short-lived. He got a shock of his life when he looked at baby for the first time.

The newborn was redheaded!

How was it possible? Several thoughts erupted all at once in his mind searching for answers. Panic-stricken, gasping for breath, he felt tightness in his chest.

‘We all wear masks, and the time comes we cannot remove them without removing some of our own skin.’ Brigadier Mark’s words rang in John’s ears like a whisper.