Hariprasad was a teacher by profession. He taught English literature for high school students. Lately, something bothered him. Always worried, he lacked the enthusiasm to work. The customary smile had vanished from his face. It seemed he was going through a rough time. His body language suggested low energy level.

"What’s wrong? You do not look alright." The school principal conveyed his concern after inviting him to his office.

"I do not know what’s wrong with my wife." Hariprasad expressed his anguish. "Reshma was not like this before. I have two grown up children, studying in University. Nowadays, she has become angry and grumpy. She uses abusive language at me in front of the children. She calls me an idiot."

"An idiot?" The principal skillfully controlled his grin. "If she is angry, there must be a cause. You must find out the reason. Perhaps you are not helping her in household chores. She is finding ways to get rid of pent up frustration. I advise, you must help out around the house to make her feel better. I bet, you will notice the change."

Hariprasad did not understand if the principal spoke from his experience or to conciliate him. Well, the advice was taken seriously. He decided to lend his helping hand. That evening he made his own coffee. He grabbed a dry cloth and began dusting.

"You idiot…" Reshma fumed with rage. "Is it the time for dusting? Who will clean the dust that falls on floor? You have no brains. I am married to such an idiot."

The children giggled. Hariprasad was embarrassed. However, he endured the insults. That evening he washed dishes and utensils. He thought, his wife would be pleased.

"Henceforth, please do not touch the dirty dishes." Reshma warned him while going to bed. "Did you check if they are clean? They are covered in grease. You have no strength in your hands. I rewashed all the dirty dishes thoroughly. You are such an idiot. God knows what you teach the students."

The principal’s advice did not work. His approach to help out had back fired. She had remained disrespectful by calling him idiot repeatedly. He was constantly offended. They had lived happily during the initial years of marriage. She had taken good care of her husband and children. Reshma had dramatically changed in the past few months. Was she taking pleasure in making derogatory remarks? Hariprasad felt being held captive in mental prison and bound with chains of his wife’s rudeness. He wanted her to be polite and cultured.

"Why are you calling me idiot?" Hariprasad pleaded. "Don’t you think we need to have gentleness in our speech?"

"Gentleness, my foot!" She reacted. "In fact, I am an idiot to have married an idiot like you. I must say, our neighbour Mrs Padmavathi, she is truly intelligent and lucky. She married a bank manager. They have washing machine, dish washer and a domestic helper as well. Here, I am like a donkey, doing all household chores."

Hariprasad quickly realized that she wanted a domestic helper and that could redeem him from the tag of idiot. Within the next 2 weeks, he bought a washing machine on monthly installment plan. A domestic helper was arranged for cooking and cleaning jobs. However, his wife did not stop calling him an idiot. He remained hurt within and his self-esteem stayed low. 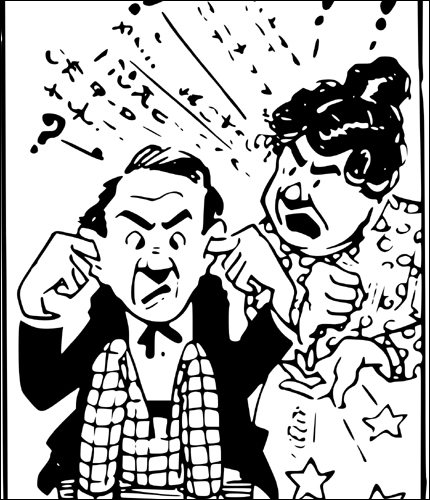 Being a worshipper of Lord Shiva, Hariprasad visited temple every Monday morning. He met the temple priest after the ritual. The graceful Pandit was known to be compassionate. Hariprasad expressed his sadness and suffering.

"I am surprised." Pandit was astonished. "Does she call you an idiot without provocation? She must be poor in interpersonal relationship. Shall I call her for counselling?"

"No. She might get mad at me for complaining." Hariprasad refused. "If you have any solution, please let me know."

"Based on my life experience, I suggest…" Pandit paused and explained. "As kids grow up, generally parents forget to give quality time to each other. The focus on children is understandable. Nevertheless, it is important for couples to have some private moments. When did you go out with her for a movie lately? When was the dine out most recently? When did you travel with her last time?"

Hariprasad nodded his head affirmatively. Next Wednesday, he took a day off from work. As soon as domestic servant finished her work and went out, he gave the idea of outing to his wife. Her face brightened up and she readily agreed. Both got dressed up and stepped out of their home for a rare day out. They ate lunch in a Chinese restaurant. Thereafter they enjoyed a movie at Multiplex with popcorn and coke. Their outing concluded with ice cream. By the time they reached home, children had returned from college. They were found irritably waiting outside the locked door.

"How was the day? Did you enjoy? I had a great time. We should take such breaks more often." Hariprasad pulled his wife closer that night while going to bed.

"You idiot…stay away." Reshma pushed his hands. "Shameless. You think that you are still young. We went out together after so many years. What is there to brag about? When I was a kid, my father used to take us out every month. It was so much of fun. It was my fault I married an idiot. Do you know my classmate Komal? She lives in Dubai. I heard, they went for European vacation quite recently. I am so unlucky."

Disappointedly, he sighed, rolled over and closed his eyes.

"Within 2 minutes, you will snore like an idiot." She continued. "You are least bothered to know if I get sleep."

Advises from Principal and Priest did not help in solving his misery. Royal bakery was on his way from school to home. The owner was elderly Mr. Ali, appeared to be intelligent and wise. Following Friday, Hariprasad stepped into Mr. Ali’s bakery to a buy a loaf of bread. There were no other customers. He used this opportunity to share his problem with Mr. Ali, who had lost his wife couple of years back.

"What are you saying?" Mr. Ali jumped out from his seat. "Your wife calls you an idiot? Unbelievable. I had a nagging wife. Anyhow, she never called me an idiot. You are a well-respected teacher in this town. Reshma must have forgotten. I know, it is not easy to make her understand. Do you snore? Husband’s snoring always drives a woman crazy."

"I do snore." Hariprasad admitted. "I have tried sleeping late to see her sleep first. If I sleep late, then I am late to rise. She gets angry and yells at me while waking me up. It is unpleasant."

"I have a solution." Mr. Ali whispered. "What do you know about women? What makes them excited? They literally love gifts, especially gold and diamonds. When did you last buy her a worthy gift?"

"You know my condition." His eyelids drooped. "I have to manage a family of four from a teacher’s salary. Cost of living is so high. I could end up in debts if I lavishly waste money on gifts."

"This is the only way." Mr. Ali concluded. "There is no other way."

Mr. Ali had seen life. He must have had his share of highs and lows in married life. He was a devout husband and father. His all five children were working in Gulf countries. Perhaps he spoke truth and was rationally correct.

Hariprasad gave it a try. On receipt of his next paycheck, he gifted Reshma beautiful pair of gold earrings. Thereafter he bought an expensive saree. Obviously, that made her happy. However, the pleasure was neither eternal nor ultimate. The joy was short-lived. She went back to her normal self by calling him ‘idiot’ on every opportunity. In a gradual process his distress toppled into full blown despair. He spoke to almost everyone in his circle.

"She is in a chronic state of bitterness. Sweet treats can trigger happiness. Give her chocolates, cakes, ice cream." Well-known tailor Sridhar advised.

"Fear is the weapon. Be strict and demonstrate some anger every now and then. She will think twice before speaking." School attendant Moosa endorsed.

Nothing worked. By and large it affected his psyche, self-esteem and self-image. He began questioning his reality. At times he doubted, perhaps he was really an idiot. He was on verge of losing his self-confidence. Abruptly, Reshma stopped calling him in slang names as if heat wave had given way to cool and calm. Hariprasad was pleasantly surprised. To his amazement, she suddenly became courteous. He found her subdued, soft and restrained for last 2-3 days. Hariprasad’ s relief and joy were palpable and rightly so. Nonetheless, he could not control his curiosity.

"Are you not well?" Next morning, he asked Reshma in the kitchen.

"You look bit depressed. Is something wrong?" Hariprasad probed.

"I am sorry. I called you idiot quite often. I have decided to stop using such derogatory words." She reluctantly replied in an undertone.

"This is good news. I am extremely happy. That is civilized and respectful way to live."

"I am bit shocked after what I heard from our neighbor Mrs. Padmavathi." She hesitantly continued. "She mentioned that everyone in the town is calling you an idiot, including the students of your school."

"What are you saying?" It frightened the hell out of him. Hariprasad was shaken.

"Did you tell anyone that I called you an idiot?" Reshma nervously asked.