Prithvi Thyagarajan had thought many times to quit gambling. Prithvi's story was all too common. They lived in Kuala Lumpur, Malaysia. He was innocently amused during family trips to Genting Highlands resorts while enjoying childhood holidays. The lure of flashing lights and chances of winning some money could be irresistible for children. Genting skyway cable car was fun. The step next was playing money. He found it intrinsically exciting. His repeated visits to Genting Highlands with college friends set a pattern within him. He was gripped by addiction to roulette. Initially he took his chances within limits of 300-500 Malaysian Ringgit. Despite a poor win ratio, Prithvi increased his limits in a gradual process.

Prithvi was 30-year-old when his father had passed away. His mother had died within next two years after prolonged illness. Being only son, he had become the owner of three popular restaurants in Kuala Lumpur city. His forefather had migrated from Tamil Nadu during British colonization in Malaysia. The restaurant and catering business was built by his father. He fell in love with Lian, a Chinese girl. Their wedding took place after his father's death. They had two children. Elder was daughter Miang and younger was son Liang.

Prithvi seemed to have it all; a well-established business, stylish car, trendy home, beautiful wife and two lovely kids. They had enough money to enjoy finer things of life. Beneath this normal and seemingly happy exterior, Prithvi was facing a daily battle.

He was bitten by the gambling bug.

Everything was alright until his parents were alive. They were focused on business and he dabbled with small amounts in Casinos at Genting Highlands. Once his parents passed away, he lost control over his addiction. ‘While winning you play more to win more and while losing one tends to play more to recover loss.' His wife Lian tried hard to make him stop. Prithvi ignored her advice. Eventually he lost everything. Restaurant business was sold to pay large debts. Bank showed no mercy and took possession of his car and home. Lian moved out with children to her father's house. 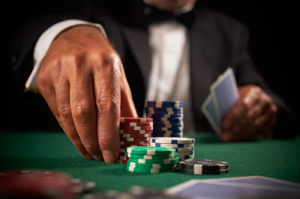 Six months had passed after his restaurants were sold off. The leftover cash in bank was eight thousand plus. Without worrying about tomorrow, Prithvi withdrew eight thousand Ringgit from an ATM machine and checked into a hotel at Genting Highlands. Five-star hotels were offering rooms at low prices to lure the gamblers. Casino was available in such hotels.

He sat in restaurant and ordered a beer. Prithvi always wanted to stop gambling and regain control over his life. Once again, he toyed with this idea. All he wanted was to hit the jackpot before he would quit. Such resolutions were made several times in the past and broken as well. Now he was missing his family. Prithvi wanted to bring them back to live with them. It could be his lucky night. Everything was possible. Who knows, he could end up in winning a fortune. Dreams of reaching back his family were so close, yet so far. He loved his family and truly missed them.

Prithvi drank two beers, ate a burger. He signed the bill to be debited to his room account. To be back to his family was his desire without knowing how and when. He let out a long sigh of despair and stood up. Involuntarily he entered the Casino. He had eight thousand Ringgit in his pocket. Six thousand worth chips were collected at exchange desk. Prithvi came closer to roulette table. He began by placing 300 Ringgit on 27 number. The croupier spun the wheel in one direction and the ball in opposite direction. Behind the croupier, a high seat was occupied an official in charge. It was a game of emotion and money. Plenty of anticipation and excitement while waiting for the ball to fall into a pocket. His heart was beating faster as the ball bounced from one pocket to the other. The spinning ball slowed down to be trapped in pocket number 13. Number 13 was next to 27.

Luck was closely following him. Prithvi thought so while placing his subsequent bet on 26. He was positively stimulated while going through excitement of next spin. The ball circularly danced in one direction and wheel gathered speed from other side. The delightful feeling of anticipation provided the thrill. He enjoyed every bit of it. Prithvi was brought back to earth as ball stopped and stayed at number 3. Pocket number 3 was the neighbor number of 26.

Once again, he was so close to success. Was luck playing hide and seek with him? That made him concurrently positive and edgy. Prithvi played some more games with same passion and kept on losing. By then he had lost six thousand Ringgit. He was caught in the dilemma if to stay or vacate the place. Prithvi pushed is right hand into his trouser pocket. He was left with 2 thousand Ringgit. He had lost everything including business, car, house and family. Temporarily he was staying with his Indian friend at Kuala Lumpur. There was no other money to pay hotel bills and travel back to Kuala Lumpur.

What was the guarantee that he would win next game? Why should he give up without trying? Prithvi deceived himself in believing he would win a large amount. He walked towards exchange counter to collect 2 thousand worth chips. Now he had no money left in his pocket. Hesitantly, he returned to gaming table.

He did not know which number to bet on. It took him some time to choose. As compared to earlier games, he became indecisive for the first time. Prithvi thought for a while. Something struck his mind. He found a way out. His birthday was seven, his wife's eleven, the kids were born on one and fourteen. He added all the numbers. The sum was 33. In next game, he placed all his money on pocket number 33.

It was sink or swim situation!

The croupier swung capstan and the ball emitted a low humming tone as it whirled. The palpable atmosphere provided acute tension. Players were trying to bury their feelings, fear, apprehension behind mask of irrelevance, win or lose. The air around was filled with fragrance of expensive perfumes. Nervously he closed his eyes while feeling the odor of his own perspiration. Prithvi could not afford to lose. He had nothing. In the blink of an eye everything he had owned had gone forever. His life was at stake. He rubbed his forehead back and forth, opened his eyes and stared at the table. Prithvi was completely taken by surprise.

The ball had fallen into pocket number 33. 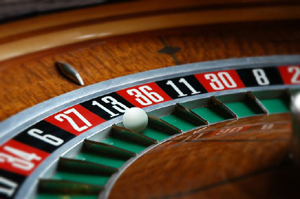 His lips broadened and eyes sparkled. The winning amount was 70000 Ringgit. He could not believe his luck. This had never happened any time in the past. Fate had smiled upon him at last. He did not want to stop. It could be his lucky night. Prithvi wanted to win everything that he had lost for several years. He continued playing with no intention to halt. Big amounts were put first on 6 and then on 29. He won both. There was large influx of people changing money and placing their bets.

Prithvi lost the count on how many games he played until early morning. He had won almost all except two after started winning. Heap of chips on his side indicated perhaps he had won in millions. The exact value was not known.

Envious looks followed him as he finally walked away with jackpot. He smiled heartily and waved at people. Prithvi Thyagarajan had created history of winning such large amount in a single night in that casino. The person at exchange counter computed the chips.

"……" Overwhelmed with joy, he stood there speechless. He needed time to understand and absorb what had happened.

"It is risky to carry hard cash." The person advised. "We can arrange bank draft or if you give us your bank details we can make an online transfer right now."

"I would prefer online transfer." Prithvi coughed and cleared his throat. He wrote bank details on a slip of paper.

Within next ten minutes, bank's notification arrived on his cellphone stating receipt of funds. Prithvi could not stop smiling on his way to hotel room. Shoes were kicked off while reclining on bed. He put a pillow under his head. Despite weary eyes he could not sleep. The scale of win had not sunk in. He found it hard to believe. His heart was still thumping in excitement.

He missed his family. The desire to join them had become an insatiable craving. Prithvi wanted to live in same house where he could interact with Lian, Miang and Liang. He felt awesome while thinking of travelling back to Kuala Lumpur. A temptation creeped in midst of cheery moments.

Why not stay back at Genting Highlands to play and try his luck one more night? Perhaps he would end up with some more millions. Prithvi was a compulsive gambler. He had done enough self-destruction over the years. Unsettled by lure, he felt vulnerable. The millions that he had earned last night were not in safe hands. He made a decision, got up and picked his cell phone.

Prithvi got into act quickly. He signed up his mobile banking app. Four million were transferred to his wife's bank account instantly. An SMS was received in confirmation of transaction. His bank balance was reduced to four thousand plus. He heaved a sigh of relief. Lian was in better condition to manage the finances than him.

With great sense of relief, he went down to restaurant to have breakfast. Back in his room, he felt fresh after warm water shower. Then a call was made to his wife on his cellphone.

"How are you?" His voice turned emotional.

"Good, good… I have some very good news for you. Today morning, I transferred 4 million to your bank account."

"Oh. That's from you? I got an SMS. I thought perhaps Bank must have done some mistake. How did you manage such sum?"

"I hit the jackpot. I am at Genting Highlands. I never thought I would ever win such a big fortune. It was incredibly my lucky night in the casino. Simply unbelievable. There are chances I might lose all if I go back to Casino. You may take care of funds."

"You did a good thing. This will help to provide a better future to our children."

"Let us find a house in Kuala Lumpur. So that we can stay together. I dearly miss you, Miang and Liang. How are the kids? We have money. We can start some business. I promise to make new beginning and build a new life for us."

"What happened? Why are you silent?" Prithvi became anxious.

"Prithvi, I have no plans to continue life with you." Lian sounded insensitive. "I want to end our marriage. I am ready for divorce."