He stepped out of the bathroom. Chatting and laughter in the hall evinced gearing up of wedding celebration. His friends and family had gathered outside. Mother and his sisters in other room chuckled and giggled while dressing up. Noise suggested they were in cheerful mood. The wedding house was shining with lights and decoration.

His mother had tapped the door a while back to check if he was getting ready.

"Where is your best man?" She had theatrically enquired. "Will he make in time?"

"He must be in a pit somewhere." Standing behind her mother, his elder sister laughed loudly. "I saw last night. He was drinking like fish."

His elder sister had returned to her mother’s house in less than six months of her marriage. Her husband worked in Saudi Arabia. She had found it difficult to keep healthy ties with her in-laws.

The best man was his close friend. They had known each other from their school days. He had gladly agreed to be his best man.

"Don’t worry. I have spoken to him. He is on his way," the bridegroom assured.

"I will get ready." He had closed and locked the door.

He unwrapped the towel from his waist. By then, he was alerted by bleating of a lamb. The weak and wavering cry of a lamb had come from a butcher’s shop. A butcher's shop was located facing his window, on the other side of the road. It was not the first time. He had heard this before. Impulsively he walked towards the window and peeked outside. The butcher was busy attending customers. He had great ability to prepare wonderful meat cuts for his clients. A ram lamb was tied outside. Isolation must have had inflicted fear in the lamb’s senses. Perhaps an unfamiliar feeling of impending death was instinctively coiling his intuition. The lamb was visibly frightened. He screamed helplessly. The slaughtering was not done publicly. The process would take place inside the shop. 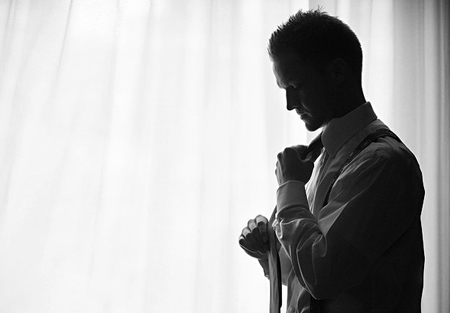 The ram lamb’s despairing bleat touched his heart. Sacrifice was quintessentially a tragic moment. The time was not far off. ‘Wedding is once-in-a-life time moment in people’s life.’ As a bachelor, he lived life on his terms. Situation would change from tomorrow. A woman would step in to share his life. She could be demanding. He felt weak in his legs. Fears of uncertainty crept into his mind.

The reality check was inching closer. This was his wedding day. He would not be called ‘bachelor’ thereafter. Would life go in the right direction? What could possibly go wrong?

"I had assumed that I would be settled after marriage. Sorry to say, I was grossly unsettled by marriage. My life went off track and I lost myself in the process." Words resonated in his mind like a loud clasp of thunder.

They were not his words. Not at all.

His father had passed away couple of years back. He reminisced it once again. He felt someone was whispering in his ears. Memories of his father came rushing to his mind. He heard strained voice and saw the jarring image of bald head, sunken cheeks, tired eyes and frail structure. Sadness seized his heart while realizing that his father was not beside him.

Two years ago, his father was on deathbed. His mother gave the news while he was abroad. "Your dad is counting his last moments." Mother had informed him over the phone. He was terrified. His heart had skipped a beat. Submerged by sadness, he had tried to rationalize if he loved his father so much to be hurt by the loss. Was he emulating a pattern of emotional reaction that was being followed by humankind? He was unsure.

He wished his father were alive. Being the head of the family, it was his right to oversee wedding arrangement. He longed for his father’s presence more desperately than ever. Strangely, the bridegroom was afraid and nervous. Was it natural for a frightened kid to call out his father for comfort? The bleating of the ram lamb continued. He turned to his closet and opened the suit hanger. Reluctantly, he began to get ready.

His father was hospitalized when he took a flight back home on emergency leave. Hesitantly, he had stepped inside the hospital room. Tears had slowly formed in his father’s eyes. The intensity of emotions was evident. It looked like finally he wanted to release the painful memories that were stored within.

"I want to talk to you." He had drawn an unsteady breath.

"Don’t worry. Once you get well, we will sit and talk." The son had tried to comfort his father.

"Clock is ticking and I am out of time." Father had articulated his fear.

"You will get well soon." He had sat down at the bedside and then he realized that his father’s heartbeat was inconsistent.

"I am not scared of death." Father had pulled his son’s hand and held it tighter. "I want to lighten my heart."

The son had assumed that his father wanted to disclose the details related to his bank accounts.

"I am listening." The son waited for him to talk.

"Our perceptions define our reality." He suppressed his whooping cough. "All along, I lived with the belief that I have to live for my family. My whole life I focused on pleasing others. I allowed others to determine my destiny instead of creating my own path."

"You are thinking too much." The son tried to cut him short.

"The burning feeling is rising and creeping through my chest to find its voice," father continued. "Life was perfect until I got married. Marriage shook the priorities of my life. In the process, I lost myself. Soon after my graduation, a banking firm recruited me. I continued representing the bank’s cricket team and loved playing lead guitar for a local band. I passionately enjoyed my leisure pursuits. I lost my father before marriage. We were living in a rented house. My mother and sisters were nice to me until I entered the wedlock. When jealousy comes from family members the hurt is deeper. They demanded their pound of flesh. I was conflicted between loyalty to my mother and siblings and love and duty towards my wife."

"What is the point in digging the past?" Son was disinterested.

"I am not saying what I experienced is unusual." He drank water and resumed. "Plenty of men must have gone through such testing times. Whoever experienced must have suffered as well. I did not deserve that pain. As my wife came into life, my mother and sisters were threatened. Once initial euphoria diminished, they constantly looked for faults in my wife. They ganged up as if they were always entitled of primary focus. She was seen as distraction. She was criticized for everything including cooking, mannerisms, dressing, speaking and walking style. They said she is disrespectful to elders. My wife defended the unfounded accusations and demanded separate accommodation. I was stressed out in maintaining the multiple track relationships as son, brother and husband. They just could not get along. The conflict of criticizing and undermining each other reached the breaking point. I chose my wife and walked out of my mother’s house."

"My mother blamed the daughter-in-law and said she was turning me up against them." Father coughed and cleared his throat. "She told everyone that her son has made her destitute. I assured my mother to take care of her expenses. Imagine I had normal banking job. I was taking care of two houses including rent. I quit my leisure activities. Costs went up dramatically once children were born. I gave tuitions in the evening to accounting students to cover expenses. By then my mother insisted me to arrange funds for the wedding of my sisters. I arranged money by availing bank loans. Your mother strongly objected and taunted me endlessly. I had no other option. Emotionally drained and mentally exhausted, I was burnt-out. No one tried to understand what I was going through. I was merely a money making machine for all of them.

"I was working late nights and weekends to make ends meet." His lips quivered. "Kids were growing up. I truly struggled to spend quality time with them. I was tagged irresponsible by my wife for not giving time for my young ones. A time came in life when her mother was recovering from hip replacement and she brought her home. Her mother was given good care for six months. Then my mother developed heart condition, I suggested bringing her home. My wife sternly refused. Despite living on a tight budget, I employed a domestic helper to look after my mother at her house. We shifted back to our old house after my mother’s death, where the rent was less. My sisters said their mother would have lived longer if the son had not abandoned her."

"I remember returning to the old house." Dim memories flashed in the son’s mind.

"That was the house you bought after working abroad." Weak smile appeared on his lips. "Giving good education is the only thing that I could do for my children. Within my capacity, I did whatever best possible to my father, mother, sisters, wife and children. My wife still calls me a failure, because I never could own a house. My mother and sisters called me spineless when I walked out to make my wife happy."

"No point in regretting. You can’t change what has happened." He tried to soothe his father.

"I am not regretting on what I had done." His eyes had turned moist. "I am regretting what I had not done. Everyone demanded his or her pound of flesh. No one asked me what I wanted. No one checked if I was happy or sad. Despite sacrificing everything I earned, no one cared for me. I was bedridden at home. My former colleagues from bank extended help by arranging hospitalization."

"Don’t worry. I am here now. I will take care of you." Son had pacified him.

"It is a shame." He was visibly distressed. "People around me happily lived or are living for themselves. Tell me, why didn’t I live for myself?"

Not knowing what to say, the son remained silent. Perhaps, he had concluded that his father had gone senile. Next day, his father took his last breath.

Standing in front of the mirror, he slipped the loop of his tie over his head. While tying the knot, he paused and stared at himself. Sometimes history does seem to repeat itself. Spiked by the worry, a cold shiver went down his spine. How would he deal if his mother and sisters gang up on his wife? Would his wife be treated like an outsider? What would happen when his wife retaliates? A smallest spark could eventually become a roaring blaze. Jealousy could be toxic. It could suck the life out from any person. Now he realized why his father was crestfallen in a silent battle.

The bleating of the lamb turned loud. That brought him back to the window. He felt sorry for the lamb, yet could not see any alternative. The shopkeeper untied the lamb and took him inside. Perhaps prayers would be offered while seeking blessings of God. Thereafter lamb would be killed and people would enter to get hold of their pound of flesh.

Someone knocked his door. He hurriedly reached and opened. There he saw his best man.

"Are you ready?" the best man asked with a beaming smile.

"Yes. I am almost ready." He replied unable to smile.

"Everyone is waiting for you." The best man explained. "First prayers, followed by blessings. Can you hurry up? You don’t have much time left."