Jessi heard the doorbell ring. She hurriedly opened door for her children. They had returned from school. First-born Leslie was in grade nine. His two younger sisters Sarah and Jane were in grade six and four. Youngest Timothy was studying in grade one. Children dropped their bags down and rushed to dining table to gobble the waiting snacks.

"I have a news for you." Jessi exuberantly announced.

"Is it national or international?" Responded Leslie.

"Hurray." Timothy expressed his joy. "Would he remember Turkish delight?"

"Leslie does not appear to be happy." Sarah pulled his leg.

"Who wants Daddy at home?" Leslie voiced his displeasure. "House would be under siege. It is like military government. I go crazy by his over discipline. I have been always unfairly picked and accused. This is the price I pay for being first born."

"Don’t be so mean. Parents advise and train their children to make them better human beings." Jessi counselled him.

Francis worked as seafarer in merchant vessel. 2-3 months of unpaid leave was given every year. Daddy’s presence at home was Leslie’s penance. He was tested by strict discipline as every moment was monitored. Mingling with friends was restricted. Every action was questioned including eating, walking and dressing. His books were checked. Francis took pride in correcting speech errors. Time to return home, study, and sleep and wake up was regulated. It made Leslie anxious and embarrassed.

The day Leslie hated the most arrived. They were about to end their evening prayers. They were alerted by taxi that honked outside the gate. Jessi and children ran out to meet head of the family. Francis tiredly stepped out after paying taxi fare. Leslie moved big suitcase inside. Sarah and Jane carried smaller bags. Youngest hid behind his mother. Francis tried to pull him. Timothy refused.

"Leslie, how are you doing in school?" Father enquired.

"He has failed in mathematics." Sarah poked her nose. "He back answers Mom. The moment stick is shown; he climbs up the kitchen door and hides inside overhead storage.

"Only rats run and hide over wooden plank ceiling." Francis reacted. "Are you weak in mathematics? I cannot believe. During my time, I used to teach mathematics to fellow students. Don’t worry; I will make you excel in all subjects."

"Your father used to get unanimously elected as class monitor right from primary classes to high school." Jessi proudly stated.

Francis homecoming was celebrated every time. Jessi looked forward to the warmth of his arms. Children were excited in anticipation of gifts and chocolates. They keenly waited Daddy to open the big suitcase. Francis felt fresh after warm shower. While opening the suitcase, family members surrounded him. Children were given clothes and other essentials. He handed over sarees, perfumes, chocolates, and other sweet stuff to Jessi. 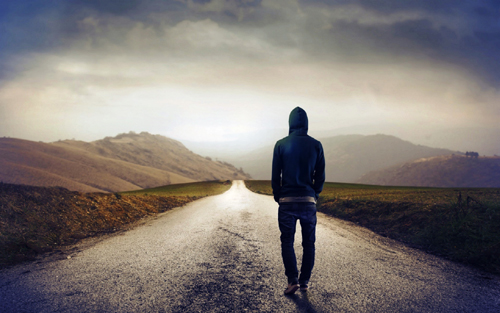 "What is that Daddy?" Leslie curiously asked. His finger was pointing at a golden color box.

"That’s a parcel given by ship Captain. I will have to deliver to his father." Francis made it short.

It was close to midnight as they wound up. Children went to bed. Timothy being the youngest, Jessi stayed beside him until he was fast asleep. The hall lights were switched off. Francis was waiting in darkness at front door steps. Jessi sat beside her husband.

"Why are you sitting that far? Come closer…" Francis pulled her closer.

"Be careful, children might wake up." Jessi blushingly whispered. "Why can’t you quit the job and stay with us? We can spend more time together."

"What is the source of income if I stay back?" Francis’s hand roamed around her stomach. "It is not easy with high living costs."

"In that case, take us with you." She leaned on his shoulder.

"How can I? I am a sailor. All sailors have a tough life when it comes to their families. We are compelled to leave behind our loves ones."

"It is not easy for a young woman to live without her husband around. Men look at her lustfully. They assume that she is an easy target." Her breathing turned heavier.

"What do you mean? Is someone bothering you? Let me know the name. I will kill him." Francis’s hands gestured with anger.

"I have a breech-loading gun and license as well." He gave a hostile look.

"Do you plan to kill and spend the rest of your life in prison?" She explained. "I am not saying these guys have sexually harassed me. However, I have sensed their flirtatious signs. They think a married woman without her husband around is easy pick. Three months back, I received an anonymous love letter without name and address. I have seen Mr. Bhat’s son Sadanand sneaking from the window. I guess, he must have written. I will show you the letter tomorrow."

Francis uttered a helpless sigh, a sigh that sent a chill up and down his spine. He stayed speechless for a while. The situation left him frustrated and angry. Not everything was all right. Feeling insecure, he pulled his wife closer. They hugged and held onto each other for a while. The warmth from his chest touched hers and she closed her eyes. The breathing turned noisy. They got up, locked the door and walked into bedroom.

Francis was up late the next morning. Jessi rushed though her sunrise chores. She was occupied until the children left for school. Domestic helper Kamala came at nine in the morning. Francis woke up at 10:00 am and had a shower. He dressed up soon after breakfast as he had some work in bank. On his way back from bank, he bought fish, fruits and vegetables.

Francis went to bedroom to change his dress. Jessi heard a loud scream coming from bedroom. She hurried toward her husband.

"What’s wrong?" She inquired in anxiety.

"Yes, I remember. That’s what you explained Leslie when he asked." Jessi remembered.

"Did anyone come here in my absence?"

"Kamala had come to clean the room. She is trustworthy. I gave her chocolates and a small pack of perfume. She happily finished her work and left." She had complete faith in her domestic help.

"I cannot understand. How can things disappear?" He yelled in frustration.

They searched everywhere inside the room. The box was nowhere in sight. Francis had lost his poise and peace. Children were questioned as soon as they returned from school. All pleaded that they were innocent.

"Leslie, tell me the truth. Did you take it?" Father screamed.

"I do not know Daddy." Leslie fretfully replied.

The situation had changed in less than twenty-four hours of his arrival. The joy had fizzled away. The mood had turned gloomy. Francis had become rude and irritated. The children cooperated to the situation by staying silent. Once the children went to bed, both Francis and Jessi sat at the front door steps for a while. Jessi hesitated to speak as if encircled by air of mystery. They were surrounded by darkness. No word escaped their lips. Awkwardly she stood up and went inside. Francis closed the door and followed her.

As usual, Jessi got up early in the morning. As she entered kitchen, something hit her foot. While bending down to pick, she saw many objects randomly scattered on the floor. Instantly she switched on the light. Brown in color, the objects looked like thin shaped chocolates.

"Look at what I found." She woke her husband.

Francis got up from sleep and examined the object that his wife had given. He raised his eyebrows in utter disbelief.

"This is Captain’s cigar. Where did you find this?" He was stunned.

"They are all over the kitchen floor." Jessi failed to figure out.

Francis got up to his feet and stepped inside the kitchen. The golden box was found beside refrigerator. He gathered them up and filled cigars back in box.

"Do you mean rats must have put down the box from overhead storage?" She asked naively.

"That is what I assume." His jaw tightened in fury. "Rats must have thrown it down. The question is who carried and hid the box on the overhead storage? Someone inside the home played dirty. Who often climbs up the kitchen door and hides inside overhead storage?"

"Leslie!" His face distorted with rage.

Leslie was interrogated at the dining table.

"Daddy I am sorry." Leslie sheepishly accepted. "It was beautifully packed. I was curious. I left it at overhead storage to check the contents later. Then I forgot to keep it back."

"You have made a mistake. You will not go unpunished." Francis banged his fist down on table. Jessi and the children were visibly shaken by his violent reaction.

It was seven in the morning. Francis came out from house with his breach-loading gun and paced back and forth for few minutes. Then he left his gun on the footsteps for public display and walked inside. He quickly returned with a wooden stick and rope in his hand. Leslie appeared as soon as he was loudly called out. By now, the neighbors had begun peeking out from their windows. Francis tied Leslie to a coconut tree. Before anyone could imagine what would happen next, Leslie was whipped black and blue. His lips twitched and eyelids fluttered. Slowly, he clenched his eyes shut, tightened the jaws and endured the pain.

"Do you intend to kill my son?" Jessi screamed in agony.

Entire neighborhood had gathered to witness the unexpected madness. Sarah and Jane were startled. Little Timothy struggled to hold back his tears. No one showed the courage to stop Francis. Onlookers were terrified. Francis let out a long loud breath and threw the wooden stick down. He looked around and gave a ferocious look as if he hated the entire neighborhood. Francis picked his gun and walked inside. Jessi was sobbing uncontrollably. Leslie’s skin was covered with bruises. She untied the rope and took him inside. The crowd slowly dispersed after watching the ghastly side of Francis.

After his holidays, Francis went back to ship. The thrashing incident changed Leslie’s life forever. Suddenly he turned distant and withdrawn. The familiar smile disappeared. He hardly spoke a word with his parents and siblings. With each passing day, he became aloof and stayed alone. Leslie lost interest in studies. Next week, Jessi gave Leslie some money to pay electricity bills. Leslie took the cash, ran away from home for the first time and returned after one month. He failed in grade nine and discontinued his studies thereafter. Parents’ attempt to correct and rehabilitate him turned out to be futile.

Whenever Francis visited them on holidays, Leslie ensured to keep himself away from home. Eventually, his appearance became rarity. He travelled, wandered in different cities, worked in restaurants and garages only to return home in a helpless state. His vagabond ways continued until Francis retired from services in 1977. Thereafter Leslie never came home and went missing forever.

Francis and Jessi celebrated their 50th wedding anniversary with joy and fervor. Concelebrated mass was offered, followed by a grand reception at Church hall. Presence of grandchildren made it lively. Sarah, Jane and Timothy’s lives were well-settled with career, family and kids.

"How do you feel?" Jessie asked her husband while going to bed. "The celebration was incomplete without our firstborn."

"He was brutally beaten and publicly humiliated for such a small mistake." Jessie’s eyes were moist with overwhelming distress.

He remained silent for a while, perhaps hated himself for letting it happen.

"Yes, I deeply regret." Francis drew a deep and shuddering breath. "Do you remember? There was a time the neighborhood men were ogling you with lewd and lustful eyes. Hence, I thought an indirect threat would restrict them to their limits. No doubt, fear was inflicted in their hearts. In the process, our first-born became a sacrificial lamb."