The twenty-five floor skyscraper was the tallest building of that town. Being close to city limits, the occupants were given state-of-the-art comforts, facilities and amenities. Apartments were bought at a hefty price tag. A cabin was provided at the gate for the security staff. At nine in the morning, Mahesh was on duty. He was about to call someone by cell phone, when his attention was drawn by commotion at the gate. He sneaked a quick look. Mahesh was left speechless for a while. Stunned, he realized the gravity and hurriedly walked out.
A crowd of 40-50 had gathered at the gate. His wife Ragini and their dog Good Luck had turned out to be the center of attraction. She violently spanked the tied dog with a wooden stick. Good Luck cried and howled. The dog had been Mahesh’s wonderful companion for the last three years. She shared an amiable relationship and was the running buddy for the entire family.
"Have you lost your mind?" Mahesh rushed to Good Luck’s help and stood in between. "She is our Good Luck. For God’s sake, control yourself. She may die."
"She is not our good luck. She is our bad luck." Ragini viciously swung the stick.
Good Luck screamed, helplessly swerved and leapt to avoid being hit. Bystanders found it harrowing to watch. Good Luck was quite well known in and around that town. Lavish parties were thrown while rejoicing the dog’s birthday for the last 2 years. History was created in town by dressing her in tailor made suits for the celebration. That was past. Today on her third birthday, Good Luck was taken to task with merciless thrashing and public humiliation.
"Stop it." Mahesh pushed his wife. "I will kill you."
"Fine, kill me." Tears ran down on her cheeks. "I would prefer to die rather than living such a pathetic life."
Mahesh’s heart dropped in anxiety. His dear dog was subjected to nasty assault. He thought for a moment and swiftly unstrapped his Good Luck. Startled by the commotion and the beating, she ran for life with tail down and disappeared from the scene.
"Let her come home, I will teach her a lesson." Ragini huffed and puffed in anger.
"What are you looking at? Are you jobless?" Mahesh addressed the gathering. "Please go away."
A furious Ragini did not look at her husband. Chin-up, unrepentantly she walked back home with the stick in her right hand. The whispering crowd dispersed and leisurely vacated the place. Mahesh was unnervingly worried while returning to his security cabin. Good Luck was his beloved pet. Once unleashed, she had vulnerably run away. He prayed for her safety. 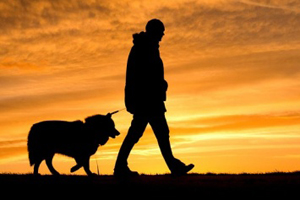