From the Editor’s desk:

Once again a hearty welcome to you to this melodious column on world’s popular web portal daijiworld.com. As I write this editorial my heart is bubbling with joy ‘cause with this episode, we have successfully completed 14 years on net, your favourite music column ‘Do..Re..Me..Fa..’ is entering into its 15th glorious year.

As we commence 15th year with lots of hope and aspirations, in a very special way I thank Almighty God for His choicest blessings to run this music column in a melodious way. I am deeply indebted to the creator of this most popular web portal Walter Nandalike for his dedication, hard work and tremendous interest that he has shown towards this column. I am highly grateful to my buddy Florine Roche for all her unassuming assistance in presenting the musical chords month after month. Last but not the least I take this unique opportunity to thank each one of you for your unstinted support and co-operation without which I wouldn’t have been here today. And I’m sure by God’s grace and with your encouragement I will be able to accomplish this marathon mission.

Although Konkani children are scattered around the globe in search of green pastures, it is very encouraging to see that they have not forgotten their roots, their mother-tongue Konkani and its rich tradition and culture. The ongoing preparation for the widely celebrated ‘Monthi-Fest’ with pomp and glory around the globe in the month of September, is itself the best example. When I think about our Konkani tradition and culture my mind goes back to yesteryears of Konkani music. I take this opportunity to wish you all a Happy Monthi Fest-2016.

Dear music lovers, in this unique episode I’m going to present to you a unique musical chord, a chord that beats melodiously from our own community. The star whom I’m going to present to you in this music column is none other than the Sangeet Sugandh Marcel Maxim Misquith popularly known as “M.M. Kumar” who through his unique music talent ventured and succeeded in spreading the fragrance of Konkani music. I’m sure you will really enjoy listening to this sweet chord of Konkani music. See you shortly same place with yet another sweet music chord. Until then, bye!

Marcel Maxim Misquith is a Konkani song writer and singer famously known to most Konkani music lovers as M M Kumar. No doubt his name is familiar to those who have attended his 9 musical nites or have heard him singing in functions like roce, weddings, social gatherings of Catholics or listened to his songs in cassettes. However, those who hear his name for the first time get confused by the acronym M M Kumar. M M Kumar was the title conferred upon him in recognition of his singing talent by the Catholic Sabha in 1981 and since then he has been known to all by this very name. So Marcel Maxim Misquith got into his new identity with effortless ease and has stayed put with the same identity since then. He re-jigs his memories with DRMF with a flashback to almost three and half decades of his journey in Konkani music.

Born to late Thomas Misquith and Florine Misquith of Amembal parish, Marcel was the eldest among the seven children born to the couple. Though his father was in the military service he had left it halfway through and did not show interest in cultivating the family property either. Left with no other alternative, his grandfather sold the agricultural property. As the home situation went from bad to worse Maxim could no longer continue to live in that stifling atmosphere. He came to Mangaluru and worked in a few places here and there before heading to the dream city Mumbai. 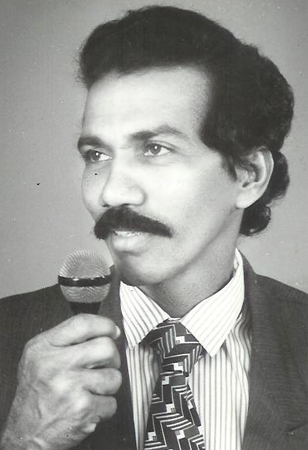 Having studied only up to 2nd standard and with no knowledge or background of music Marcel’s journey into Konkani music world began when he started singing for roce, weddings and other family functions. He was appreciated for his voice and aptitude for singing and that encouragement proved to be the major guiding force in his emergence as a singer-song writer. He picked up the nuances of singing step by step and developed his own style of singing.

Encouraged by the positive response, he also tried his hand in writing lyrics and showed them to Bejai Harry of Harry’s band fame. Harry appreciated them and gave him a nod of approval for his lyrics. Embolden by this pat on the back Marcel began to write songs which he sang in his musical nites.

In 1982 the first musical nite was held in the premises of Bondel church and till 1999 M M Kumar has 9 musical nites to his credit held in Bondel Church Compound, in Don Bosco Hall and in the Town Hall. All his musical nites were received with a resounding response from Konkani music aficionados. In Mumbai he kept his flame for Konkani music alive by singing in Victor Concesso nites. After working for almost 15 years in Mumbai Maxim came back to Mangaluru for good.

Since music was not a career but only a hobby Marcel was running a Bakery titled “Sweet Corner” in front of the Bondel Church. Because of the advantageous position of his Bakery Marcel got small orders of arranging tea and snacks for various functions. From here he graduated to hold his own catering business known as “Evon Caterers”, named after his only daughter Evon and he has been running it since 1996. 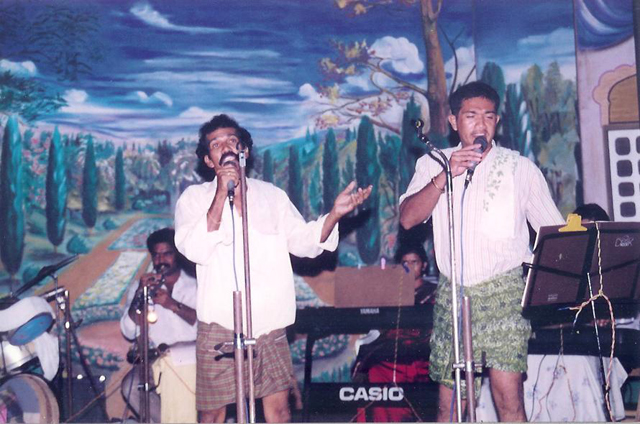 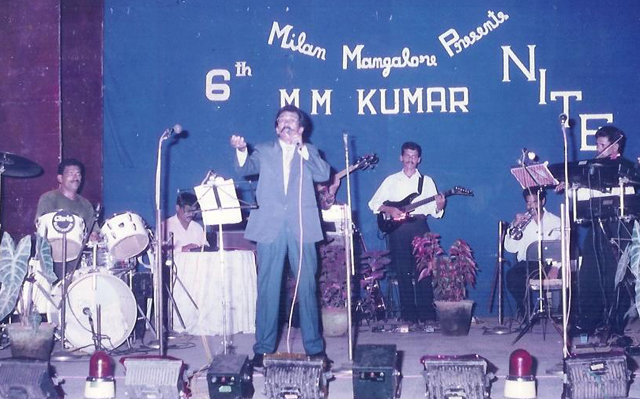 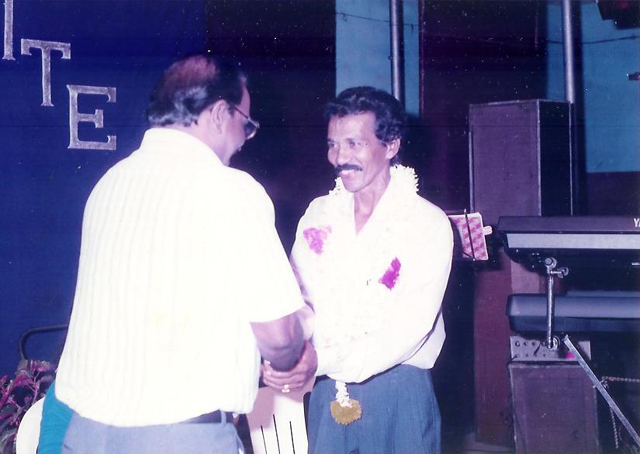 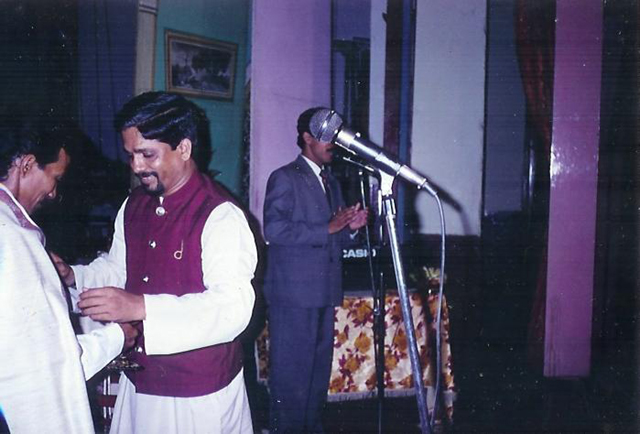 In the meantime he set up a musical band titled “Milan Mangalore” and the band gave him support to organize the 3rd, 4th and 5th musical nites of M M Kumar. Singers like Ivan Noronha, Rosy Crasta, Zeena, Janet and Nelson D Souza were members of Milan Mangalore. With Konkan Kogul late Wilfy Rebimbus and well known singer Victor Conceso as his role models Marcel has written 94 songs so far and still continues to write though not in the same vigour. He has also written and sung a few Tulu songs. There has been a lull since 1999 after the 9th musical nite and he is aware of it. He says he finds it difficult to devote time for his hobby of writing songs and finding tunes for them while managing his daily bread and butter.

Recognising his contributions to Konkani music office bearers of Milan Mangalore group conferred him with the title Konkani Sangeet Sugandh. At 64 though age is catching up with him he nurtures the dream of holding the 10th musical nite as his swansong before bidding goodbye to his musical nites. He has a few collections of unsung songs and he wants to write a few more before getting into action. If Marcel succeeds in fructifying his dream of holding his 10th M M Kumar musical nite he will be once again on stage after a long gap of almost 18 years. That would be quite a valiant act on his part.

Since age is not a worrying factor for Marcel his only concern is to put together the required sum of money to organise the musical show. Many of his friends and acquaintances have promised him financial help towards realising his dream and Marcel is waiting for the appropriate moment to find the right rhythmic moment for this grand event.

Writing songs and singing is quite a serious hobby for Marcel who is known more for his sentimental songs. His catering business keeps him busy leaving him little or no time to think creatively. Though it is nearly two decades since his last musical nite, he does not have a fat collection of songs mainly because he could hardly find time all these years in the midst of his efforts to ensure both ends meet. “For writing songs or creating tunes the mind should be free from tensions and other responsibilities. It is not possible for me to divert my energy towards Konkani songs and music in such circumstances”, says Marcel . His wife Evelyn who works as a nurse at A J Hospital has been the pillar of his strength encouraging him in his quest for finding fulfilment in Konkani music. She has also rendered her voice for some duet songs with Marcel.

Apart from his catering business sometimes he also takes up the job of a supervisor for other caterers. However, he is determined to go ahead with his plan of his next musical nite and is preparing for the same with the right dose of earnestness. “I feel incomplete having stopped with only 9 musical nites and want to say goodbye with my 10th musical show. I have been thinking about it for quite some time and it will be my dream to hold my 10th musical nite soon. I am working in that direction and I am hopeful of giving finishing touches towards realising that dream”, says Marcel with a resolute voice.

Age has not withered or petered out the enthusiasm of M M Kumar for Konkani music. Rather he is emboldened by the encouraging and positive response he has received in pursuit of his dream. One must salute him for his gumption and the energy to nurture the dream of making a comeback after almost two decades and for working relentlessly to realise that dream. Let us hope he is able to fulfil his aspirations.