August 11, 2014
From the editor’s desk :-
Dear Konkani music lovers,
After taking a long nap like “kumba karna” I am back here again to present to you yet another precious jewel of Konkani Music on your most favorite music column Do..Re..Me..Fa..
After presenting the most sensational female singers on this platform for almost a year, Do..Re..Me..Fa.. decided to take a short break. I never dreamt that the short break will take such a big time to return. I thank the Almighty God for His blessings, great support from my buddy Florine and all the more the immense love from lovely people like you gives me the strength to carry on in my Do..Re..Me..Fa.. mission!
In this new series of profiles we are going to present to you few very rare precious jewels that entered Konkani history books unnoticed. It is also our endeavor to bring to light, the hidden talents of some of the budding music artistes and to encourage them by promoting their music recordings and cassettes. It is also our effort to try to share the taste of Konkani Music with non-Konkani people and give them a taste of our rich heritage and culture.
And now…..
As I glance at the vast Konkan skies… I can see a star hiding behind the clouds. This star has composed nearly 400 songs in Konkani, Kannada & Tulu. One of his signature songs “Baavli” that he composed as a teenager has reckoned as one of the best Songs in Konkani! The star about whom I’m talking about is none other than Ronald D’Souza… popularly known as Rony Bondel to his countless fans.
Although I had a personal interview with Rony almost three years back with the help of my co-brother Joachim Lobo from Bondel, I failed to present this unique star in my column until date. Now as I present to you this star on Do..Re..Me..Fa.. my heart filled with gratitude goes to my buddy Florine for meeting with him resulting in this profile. I am sure you will really enjoy listening to this sweet chord of Konkani music!
See you soon with yet another special Konkani Music chord next month, same place.
Thank you once again and “God Bless” us all!
Yours in ‘Do..Re..Me..Fa..’
Gerry D'Mello, Bendur

He still remembers the tune and the lyrics of the song he composed for the first movie in Konkani language “Tisri Cheet” produced by the Konkani speaking community of Mangalore. The quite hummable “Rakonn Rakonn Amche Payi Volle, zaithe kazar zale” (our legs got tired of waiting, many got married) was one of the six songs composed by Ronald D Souza for the movie Tisri Cheet produced by Peter Gonsalves in the early 1970’s. Rony also sang this song along with the lead singer Victor Concesso. Rony Bondel, as Rony is popularly known, might not have been able to hear the song since the film was released in 1978 as the songs are not available in any format except in the form of an spool tape played in Meltron machines used only in All India Radio Stations, that too once upon a time.
Nurtured inherited talent
Singer, lyricist and composer Ronald D'Souza, was a well established Konkani singer of his times but kept a very low profile despite attaining success and popularity as a singer and composer. He continued his tryst with Konkani music all these years as many wannabe singers keep coming to him to learn the nuances of singing or even asking him to compose songs for them and also to seek guidance. Moreover he is completely involved in the church activities that call for his role as a composer, lyricist and trainer and it gives him the kind of happiness he treasures the most. “I am happy to be associated with music in one way or the other and teaching others is the greatest joy for a musician. I want to be like a open lamp that spreads its brightness” is his quick riposte. 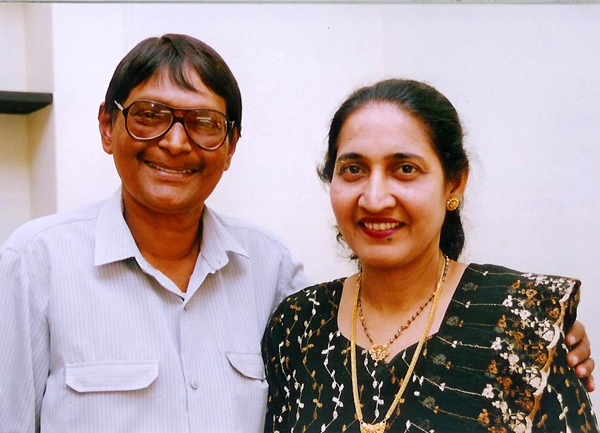 Rony was born in Bondel parish 67 summers ago as one of the seven children of his parents and it turned out that all the seven sibblings had innate talent for music. His father was a singer in the church choir and Rony picked up the talent from his father at a young age. He had no formal training in music and he picked up the rudiments of music on his own. “Music is in our blood and it is a god’s gift”, he tells me. “I made my entry into Konkani music due the inspiration and encouragement of my older brother who spotted my talent. My brother was in Mumbai and was associated with Konkani singer late Gerome D Souza”.
The first song he sang was “Bavli” (doll) in 1966 for his own lyrics and that propelled him to the top as a promising singer in Konkani. Apart from the songs of Tisri Cheet he went on to sing some of the evergreen Konkani numbers like “Punvechi raat”, “amchya Vadyanthlen”, “Mai” and also the song he composed following the tragic plane crash of 2010 at Bajpe airport. The song composed by him was sung by another artiste trained by Rony and he recalls “there were tears in the eyes of all those who listened to the song and its soulful lyrics”.
After completing his ITI in Mangalore Rony had gone to Mumbai and from there he went to Muscat where he worked for two years. After coming back to Mangalore he worked for Lamina Foundation and also at Jeppu Workshop. After working for a few years he started his own carpentry shop in Bondel where he now leads a retired life with his wife Gracy.
Journey in Music
After making his grand entry into Konkani music there was no looking back for Rony and he went on to become a much sought after singer and composer. Since then he has composed about 400 songs and has also written hymns for various occasions especially for church related activities and function. He continues to compose songs for those who come to him asking him to compose songs for certain occasions or for specific events. 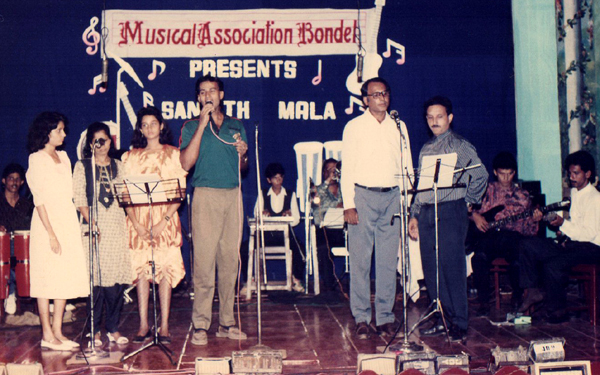 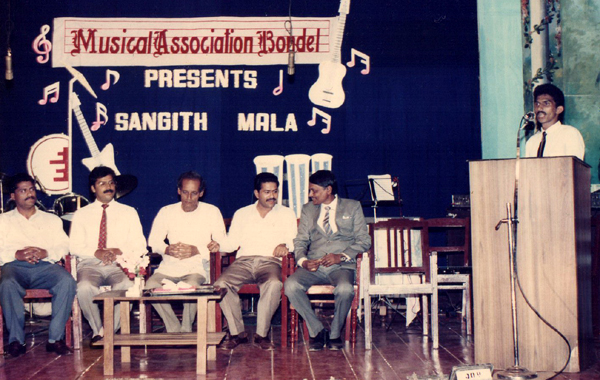 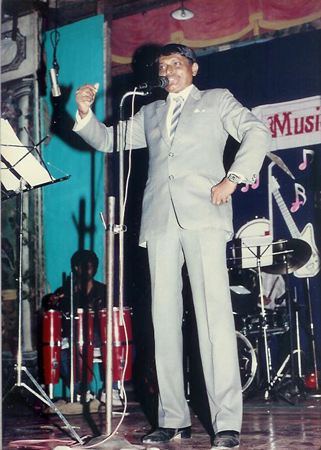 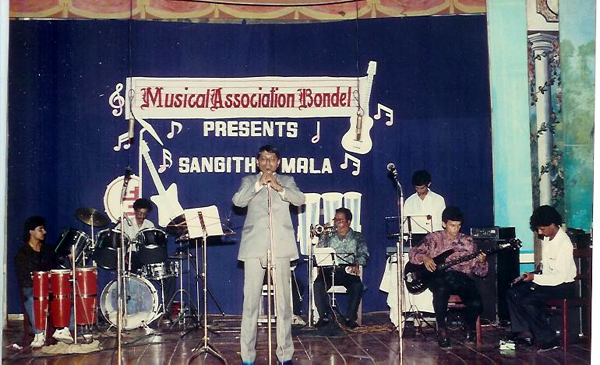 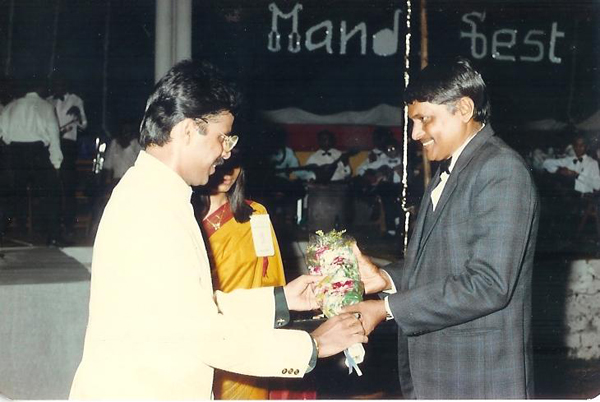 Initially Rony used to train interested youngsters of Derabail and Bondel parish to help them participate in various inter-parish singing competitions conducted at Don Bosco hall. Rony has also sung in many musical nites held at Don Bosco Hall, at Rozario church and at St Mary’s Church Bondel. He also got an opportunity to sing in music programme which he titled as “Sangeet malaa” held at St Mary’s playground in Mumbai. With the kind of exposure his name was in the reckoning and naturally Rony was asked to compose songs for the film “Tisri Cheet” by Peter Gonsalves for his one and only Konkani film.
In fact, talented Konkani lyricist and musician late Henry T D'Souza was chosen as the Music Director of the film. But by then Henry was chosen as the music director of another film of Gabbu Urva named “Dev Ditha” which subsequently did not materialize. Henry thought he could not do justice to both the films and therefore Henry suggested the name of Ronny Bondel to Peter. What followed then is history. The very association with the film catapulted Rony to fame which however, did not stay long as the film failed to make any impact.
Though the untimely demise of the Music Director of the movie Henry T D Souza just three days prior to recording was a major blow to the entire unit they pulled their act together and carried on with the task they had on hand. Rony recalls that in the absence of recording studios they had to record the songs in the Retreat house, which was converted into a make shift studio by closing all the windows to get sound proof effect. To avoid vehicular and other noise the recording was held at night and the team took the entire night to record the songs. Rony also recalls the funny incident of a cat belonging to the seminary crying meow at the Fathima Retreat house when the recording was going on in full swing. “The entire orchestra team had to be recouped and we had to do the song all over again”, he reminisces.
Credible Accomplishments
Composing songs is Ronny’s forte and whenever he gets the tune he hums it and records it lest he might forget it the next moment. “Otherwise there is tendency to forget the tune and also I may not be able to recollect the tune at all. This has happened to me umpteen number of times because I cab hum the tune and record it only when I am at home”, he explains. Once he has the tunes, he fills appropriate words into these tunes to come out with a beautiful number. “This is my style of working which I follow even today because when I have the tune I find it easy to fill it only with necessary words”, he clarifies.

Though Rony was an established and popular singer he rose to limelight following detailed coverage by the media which widely covered the making of the film. Since Rony’s photograph was published along with the content he was easily recognized by the people. But public memory is short and unless singers keep themselves in the limelight it is not always easy to keep the tempo of success. For Rony music was only a passionate hobby which he pursued with right earnest.
Rony had worked on two cossets – one containing his own songs Rony Bondel tunes and other cassette contained hymns titled “Praise the Lord Allelluya”. In the same breadth he adds “though I did not make any money I did not suffer any loss. But I have that feeling of contentment which money cannot buy. At the same time I did not think it prudent to bring out more cassettes because when it comes to Konkani songs one cannot be assured of the money invested leave alone return on investment”. He also adds that “since the present generation is not evincing much importance to Konkani songs, I feel the future of Konkani is at stake. If this trend continues Konkani may not survive for long”.
For the 2008 Konkani Niranthari that created Guinness World Record Rony gave 18 of his compositions and trained his own group that performed at the event. He is passionate about composing songs and very often writes on subjects that touches his heart and on subjects of social relevance. For example after the Air India flight that crashed at Bajpe Airport he composed a song that touched the heart and soul of many.
In Conclusion
For the last five years Rony has not sung in any public performances due to various reasons including failing memory. He has taken retirement from his business and now spends most of his time at home where he is available for all those who need his help and support for Konkani music. ‘As a composer I cannot detach myself from music and therefore I feel I cannot retire. It is my lifeline and music keeps my adrenaline pumping”, he avers.
We wish Rony Bondel a long and cherished life in Konkani Music!